How Attorneys Are Fighting COVID-19 On The Front Lines

By Michele Gorman
Law360 is providing free access to its coronavirus coverage to make sure all members of the legal community have accurate information in this time of uncertainty and change. Use the form below to sign up for any of our weekly newsletters. Signing up for any of our section newsletters will opt you in to the weekly Coronavirus briefing.

Miller, who is also a U.S. Army colonel, was asked to lead a joint task force helping with humanitarian and public safety needs across California. 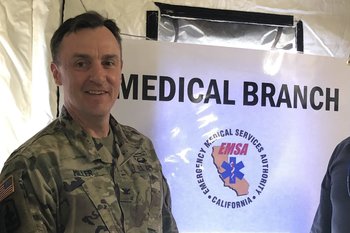 Col. Jesse Miller's responsibilities in the fight against COVID-19 have included leading teams in support of state and local authorities by operating emergency medical sites, including this one in Burlingame, California, shown April 9. (Courtesy of Col. Jesse Miller)

The next day, he activated his brigade — the 115th Regional Support Group — to support food banks and other sites across the Golden State. Within just a few days, the joint force, made up of California Army National Guardsmen and California Air National Guardsmen, was operating at 15 different mission sites.

In the National Guard, he said, "We just have to learn quickly and never be late to need, we say. We adapt and use all our civilian-acquired experiences and our military training, and work long hours and just get it done — a little bit like getting ready for trial, but on a grand scale with a huge sense of purpose behind us."

Miller is among the lawyers around the country who have either taken leaves of absence from their practices to offer support during the pandemic or are lending a hand after work and on weekends.

Miller — who deployed to the Middle East after 9/11, to New Orleans in the wake of Hurricane Katrina and to Kosovo on a peace enforcement operation — said the response to COVID-19 is the most important mission he's ever led, especially given its state and national scope and because it is in direct service to his community.

Food banks have been hit hard by the novel coronavirus outbreak, leading to shortages and a drop in regular volunteers. Following a March 20 order by California Gov. Gavin Newsom deploying the California National Guard, Miller and his force have helped with operations across the state — from driving forklifts and packaging food to delivering meals to local pantries.

He has also led teams in setting up hospital beds at fairgrounds to function as alternative medical care sites, and assisted as homeless shelters adapt to provide medical screening. And he played a role in the California National Guard flying ventilators to New York, New Jersey and other states in need of more supplies.

Miller, an infantry officer who has been in the Army for nearly three decades and in the California National Guard for 24 years, joined Reed Smith in 2005. Four years later, he became an equity partner. He said both the firm and his team have been supportive of his service.

"When I got the call ... I just went," he said. "I knew that it would be fine with my cases and clients and the firm, that we would figure it out as we went forward."

Like Miller, other lawyers are going the extra mile during the crisis. With her normal volunteer programs suspended, Laredo & Smith LLP partner Payal Salsburg signed on to assist doctors and nurses with patient discharges and escorts at Massachusetts General Hospital, where she spends as many as 30 hours during the workweek and on weekends. 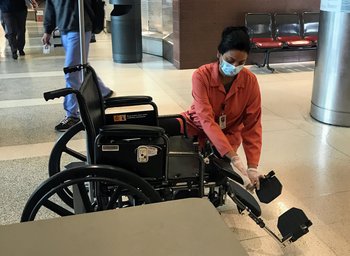 After she puts in a full day of legal work, Salsburg — who practices commercial litigation and white collar criminal defense — volunteers at the Boston hospital for two hours each weeknight. She said one of the most difficult parts has been seeing people who are prevented from visiting with family members or friends because of stricter rules during the pandemic.

A few days ago, she sat in the lobby with a woman who couldn't visit her best friend of 50 years because of hospital policies.

"I sat with her as she said a prayer. ... We were able to get a priest on the phone to talk to her and pray with her," Salsburg said. "It's heart-wrenching to see that happening."

She added, "We've got all the tissues in the world that people need, and we sit with them for as long as they need."

Another day, Salsburg overheard a security guard inform a dying patient's spouse and son that only one family member could visit at a time.

"That was heartbreaking," she said. "That one day I went home and I just cried and I said, 'This is really tough.' If I were in that position, I just don't know how I would deal with it."

At home, Salsburg keeps up her own morale by regularly speaking with her relatives on FaceTime. At work, she said she has received full support from her colleagues.

When she told her firm about her plans to volunteer at the hospital and that she might interact with patients who have tested positive for COVID-19, it was "no questions asked," she said.

They told her to "be safe, take care of yourself," she recalled.

Salsburg's volunteer tasks include helping patients check in to the hospital; wheeling patients from their rooms to the front of the building for discharge; transporting phone chargers, food and other patient belongings left at the front desk by visitors; and giving staff members clean masks and hand sanitizer when they arrive for their shifts.

"It can be things like that which seem small," she said. "But it's very, very important for the functioning of the hospital."

Meanwhile in Florida, Jordan Weinkle left his law practice at Weinkle Abergel Law Group PLLC, ​a boutique business and real estate firm that he co-founded about three years ago​, to volunteer for five weeks in the fight against COVID-19.

As an infantry officer with the Florida Army National Guard, he traveled to several bases around the state, assisting for as many as 18 hours a day with testing sites and general logistics for emergency and medical supplies, including ensuring the safety of the routes that personnel would take to make crucial deliveries. At times, he drew on his skills as a lawyer and a businessperson.

Since returning home, he said he has received multiple calls about his availability to assist with operations in Tennessee and Nebraska.

"If I'm really needed again, then I will be there again," he said.

"Seeing the military and what you can do in the military [for] something that's truly for your community and not just based on some conceptual fight or a fight that's happening on the other side of the world ... it hits home," he said.

At the Food Bank for Monterey County in California on March 23, Col. Jesse Miller, seventh from top left, stands with soldiers from Joint Task Force 115 and the 340th Support Battalion, as well as the organization's executive director, Melissa Kendrick, center. (Courtesy of Col. Jesse Miller)


Miller, who remains on National Guard duty in California, agreed.

"I can't think of [a time] — certainly not in my lifetime — where there has been an enemy that doesn't discriminate against anyone," he said. "We're trying to all pull together to fight it and keep people alive and keep our government and everything working and protecting our most vulnerable population."

Since that initial call in mid-March, Miller has transitioned to a broader role. He now serves as deputy commander for a domestic support task force, which covers all of the California National Guard's efforts. He spends most of his days preparing for emerging needs from Newsom and individual counties, and most recently led efforts to coordinate Guard support to skilled nursing facilities hit hard by the pandemic.

Although he misses his wife, two teenage children and legal work, he's prepared to help in the fight against COVID-19 for as long as he's needed.