By Daniel Tay
Law360 is providing free access to its coronavirus coverage to make sure all members of the legal community have accurate information in this time of uncertainty and change. Use the form below to sign up for any of our daily newsletters. Signing up for any of our section newsletters will opt you in to the daily Coronavirus briefing.


Law360 (April 30, 2020, 6:31 PM EDT) -- Minnesota would extend filing and payment deadlines for several tax types, waive penalties and fully conform to federal law on deducting expenses for capital equipment in a bill the state Senate passed Thursday in response to the coronavirus pandemic. 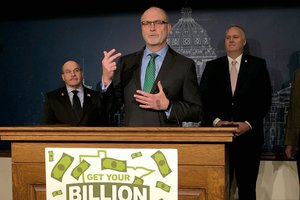 Minnesota Senate Taxes Committee Chairman Roger Chamberlain was the sponsor of a bill that passed the Senate on Thursday. The bill would, among other things, extend tax deadlines. (AP)

S.B. 3843 passed the Senate by a 40-27 vote, with all 35 Republican senators and five Democratic-Farmer-Labor senators voting for the bill. The bill would extend certain filing and payment deadlines; waive penalties for property, individual income and corporate income taxes; and push back the dates for estimated tax and accelerated sales and use tax payments.

The bill would also conform the state to Section 179

of the Internal Revenue Code and allow Minnesotans to take the full deduction for certain business assets in the year the qualifying equipment is placed in service, retroactive to tax year 2018.

Additionally, the bill would provide that loans from the federal Paycheck Protection Program, a response to the COVID-19 pandemic's economic impacts on small businesses, are not taxable by the state. At the same time, taxpayers would not be allowed to claim a double benefit by excluding the loans from gross income and also claiming deductions ordinarily allowed for employee expenses, according to the bill. According to a statement by the Senate Republican caucus, the bill will cost $330 million.

According to a sponsor of the bill, Senate Taxes Committee Chairman Roger Chamberlain, R-Lino Lakes, the measures are meant to provide businesses with liquidity and stability.

"It's about stopping the bleeding, stabilizing the patient, and then active, aggressive recovery, to get us back to normal as quick as possible," Chamberlain said.

Several Democratic-Farmer-Labor senators criticized the bill as "premature." Sen. Kari Dziedzic, DFL-Minneapolis, said during the Thursday session that the Minnesota Department of Management and Budget will release revised estimates of expected revenues and expenditures for the current biennium and that the Senate should wait for the information before voting on the bill.

"This bill is setting up promises that you may not be able to keep," Dziedzic said. "This bill should wait until next week, after we hear the budget update."

"Unless the federal government comes in here with a boatload of money, not only for the state but for local governments. I don't know how we're going to get out of this hole that we've got here," Bakk said.

, raising the Section 179 deduction limit to $1 million, but retained a state cap on the amount deductible in the first year and a requirement that adds back the excess over the cap before being deducted in following years. Under S.B. 3843, the state's cap and add-back requirement would be removed.

Under the bill, property tax payment deadlines for the first half of the year would be extended by 60 days, which means the payment would be due July 15. The state tax commissioner's extension of filing and payment deadlines for individual income tax filers to July 15 would be codified by the bill. The provisions would be effective upon enactment.

Additionally, the first two estimated tax payments for 2020 would be pushed back under the bill. The accelerated payment of sales taxes due June 20 would also be pushed back, to July 20.

The bill does not contain any provisions that would eliminate state taxes on Social Security, which was a Republican priority in a previous version of the Republicans' budget proposal. Senate Majority Leader Paul Gazelka, R-Nisswa, said in the session that the proposed tax cut would not be possible due to the effects of the pandemic.

Chamberlain, Bakk, Dziedzic and Senate leadership for both caucuses did not respond to requests for additional comment.