Law360 (April 30, 2020, 5:35 PM EDT) -- Advocates for Silicon Valley and other sectors are getting traction in Congress for an emerging strategy of using virus relief legislation as a vehicle to stop the scheduled 2022 expiration of full and immediate expensing of research and development costs. 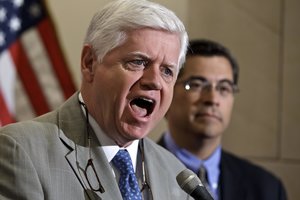 Rep. John Larson, D-Conn., a senior member of the House Ways and Means Committee, told Law360 he was looking to build consensus support for permanent full expensing of R&D costs with allies from both parties on the tax-writing panel. Business advocates have endorsed a campaign led by Larson and other lawmakers to try to attach such a proposal to legislation aimed at countering the economic effects of the COVID-19 pandemic.

"I think it's very important that we focus on research, especially in these times," said Larson, a former chairman of the House Democratic Caucus.

Supporters of Larson's American Innovation and Competitiveness Act, H.R. 4549, warn virus-related economic setbacks will put pressure on companies to focus on the bottom line and cut research and experimentation costs. They say his plan to permanently extend full expensing and avert its replacement in 2022 with five-year amortization, as enacted under the 2017 tax law,

would entice companies to launch research initiatives and help them attract investors.

Ways and Means Chairman Richard Neal, D-Mass., has stopped short of supporting Larson's proposal, but has made clear he will be open to business tax incentives as a way to attract GOP support for ambitious Democratic priorities in the next virus relief measure.

House Speaker Nancy Pelosi, D-Calif., has said she wants to follow up on a $484 billion package

of support for small businesses, hospitals and testing enacted last week with aid for state and local governments and a potential second wave of economic impact payments similar to those contained in the Coronavirus Aid, Relief and Economic Security Act

Lawmakers in both parties are also weighing proposals to provide tax incentives to frontline workers and their employers in health care, law enforcement and other sectors responsible for dealing directly with the COVID-19 pandemic.

Another Ways and Means member, Rep. Ron Estes, R-Kan., said he hoped there would be an accord to move Larson's proposal in a bipartisan package of tax incentives aimed at helping businesses recover from virus woes. He added that he was concerned Pelosi and her team would push through a partisan package, which could lead to GOP roadblocks in the Senate and lengthy negotiations between the chambers.

"It would make a whole lot of sense to add this to a whole lot of things we are talking about. It would help businesses maintain their cash flow and get to the other side of this peak of the coronavirus epidemic," Estes told Law360.

Other proposals backed by some Republicans include one by Sen. Pat Toomey, R-Pa., to preserve immediate full deductions, or 100% bonus depreciation, for business equipment and eliminate a timetable in the 2017 law for phased reductions in the incentive over four years starting in 2023 and a full sunset at the end of 2026.

The continuation of full expensing for R&D costs in lieu of amortization has been promoted by the National Association of Manufacturers and other groups, including advocates for Silicon Valley.

Peter Chandler, director of federal policy and government relations for TechNet, an alliance of top executives for technology companies, told Law360 his group backed Larson's efforts to expedite a proposal to preserve full expensing for R&D costs by putting it in legislation to deal with virus fallout.

"This would support U.S. jobs that focus on developing or improving new products and drugs, and enable businesses to make pro-innovation planning decisions during a time of uncertainty," he said.

"It's a big issue for small and medium-sized businesses," Everson told Law360.

But some critics have pushed back against including incentives for corporate R&D in virus relief legislation. For example, Steve Wamhoff, director of federal tax policy for the Institute on Taxation and Economic Policy, a progressive think tank, said he was skeptical whether a continuation of full expensing would persuade companies "to do something they wouldn't do anyway."

Wamhoff called for adhering to cost-saving items passed in the $1.5 trillion Tax Cuts and Jobs Act, including the move from allowing full, immediate deductions for R&D costs to gradual deductions over five years.

"To come back now with individual bills to undo them is just ridiculous," Wamhoff said.

The Tax Foundation, a right-of-center think tank, has estimated a proposal to make full expensing permanent would cost more than $119 billion over 10 years and boost economic growth by about 0.15%, while creating about 30,600 jobs.

Despite critics' concerns about enacting Larson's proposal without revenue-raising offsets or spending cuts, former Ways and Means member Phil English, co-chair of government relations for Arent Fox LLP, said the proposal likely would be attractive to both parties. He predicted the plan would be seen as a tool both to fight the virus itself and to expedite growth as the pandemic recedes.

"We are counting on private-sector innovation and domestic manufacturing to reposition us to deal with the pandemic. The same companies that are out front with this crisis response are the ones who are disadvantaged because of R&D amortization," English told Law360.

Joe Kennedy, a senior fellow at the Information Technology and Innovation Foundation, a nonprofit think tank, told Law360 it was "almost inevitable that research is being cut" and warned projects could be delayed for a year or two, which could mean "slower technological advancement and lower living standards." In addition to aiding technology companies and drug makers, business advocates say permanent full expensing is important for businesses in sectors such as defense, energy and transportation.

Whether Congress enacts the Larson proposal or not, Kennedy, a former Commerce Department chief economist, said some companies might need some time to deal with financial aftershocks from the new coronavirus. But he said action by lawmakers to continue full expensing probably would make research and development projects more enticing.

"If they repeal amortization," he said, "then when companies feel comfortable investing again, it would reduce the cost of doing research."