Legal Malpractice Claims Have Soared (And May Soar Higher)


Law360 (May 18, 2020, 5:54 PM EDT) -- The number and size of legal malpractice claims in the U.S. surged in 2019, and another wave of claims is likely to batter law firms in the coming years as a result of the coronavirus pandemic, according to a new report by insurance broker Ames & Gough.

Ames & Gough's survey of 10 leading lawyers' professional responsibility insurers, which together provide insurance to 80 of the 100 largest law firms in the U.S. by revenue, determined that eight of the 10 insurers saw as many or more legal malpractice claims in 2019 than they did in 2018, with three reporting double-digit increases.

The spike comes after five straight years in which the majority of insurers reported claims had either remained the same or decreased year-over-year, according to the report, which is in its 10th year. 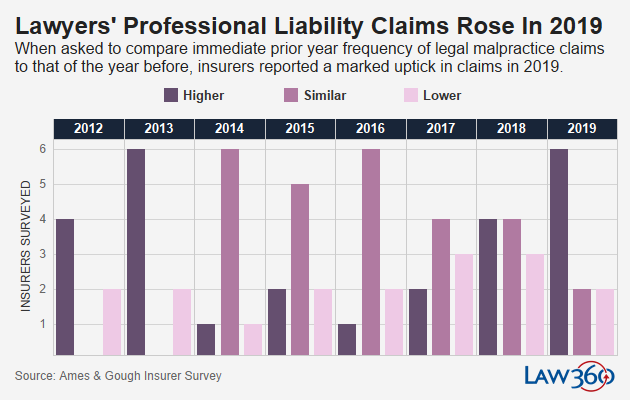 In addition to the uptick in the number of legal malpractice claims, the dollar amounts involved in those claims were also greater in 2018 and 2019 when compared to past years.

The survey found that the number of claims resulting in the largest category of payouts surged for the second consecutive year in 2019, with the majority of insurers surveyed saying they had a claim payout of over $150 million during the past two years, and at least two settlements exceeded $250 million.

"Unfortunately, this trend may not be going away anytime soon," said Eileen Garczynski, senior vice president and partner at Ames & Gough. "The sustained shutdown of the U.S. economy this year due to the COVID-19 pandemic may trigger yet another wave of legal malpractice claims, similar to what we saw in the aftermath of the 2008 recession."

Conditions present now, such as volatility and slow demand, have historically tended to trigger legal malpractice claims during other economic slowdowns, including during and in the years following the Great Recession, said Garczynski, who authored the report.

Additionally, a lack of proper communication and documentation of communication on the part of lawyers is one big reason for malpractice claims, and the risk that presents could be amplified while everyone is working from home, Garczynski said.

"I think we're going to see an even bigger surge of legal malpractice claims coming out of this," she said.

According to the report, conflicts of interest have long been the most common alleged legal malpractice error and that continued to be the case in 2019.

A risk that has been increasing in recent years is scope creep, the report found, in which the size, complexity and cost of a matter is bigger than originally expected.

For the fifth year in a row, the insurers who were surveyed said "business transactions" and "corporate and securities" were the two practice areas in which they experienced the largest number of legal malpractice claims.

"With so much riding on the success of any deal, clients inevitably point fingers at their lawyers when things don't go as planned," Garczynski said. "Lawyers have to be proactive here. Once a firm accepts this type of engagement, it should immediately identify any potential risks and make sure they have all the resources and capabilities needed to handle the related work effectively."