Raising Taxes To Pay For Virus Relief May Be Tall Order


Law360 (June 4, 2020, 5:49 PM EDT) -- Congress has passed trillions of dollars in relief since the novel coronavirus pandemic flattened the economy, but lawmakers and economists question whether a future Congress will muster the political will to raise taxes and cut spending to stem the country's red ink. 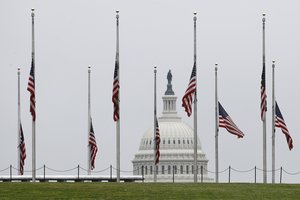 With Washington's Capitol dome in the background, flags flew at half staff at the Washington Monument on May 22 in remembrance of Americans who lost their lives because of the coronavirus pandemic. (AP)

Concerns about whether the impact of coming efforts to pay off this year's deficit-financed spending and tax legislation will depress future economic growth haven't yet taken center stage while the Federal Reserve keeps interest rates low amid record levels of unemployment.

They have begun to percolate, however. A bipartisan group of 60 House lawmakers wrote to their party leaders on Monday requesting that the next COVID-19 relief bill include budget reforms to help Congress address federal debt and deficits once the economy fully recovers.

The group asked that Congress require the Government Accountability Office to report on the nation's fiscal health each year and that new commissions be established to address shortfalls in federal trust funds for highways, Social Security and Medicare. The letter was spearheaded by Rep. Jodey Arrington, R-Texas, and Rep. Scott Peters, D-Calif.

The group didn't specifically address whether future tax increases or spending cuts would be necessary, but called for a "credible plan for responsibility to bring the debt burden to sustainable levels" and a debt-to-gross domestic product target for the federal budget.

Darrell J. Gaskin, an economist at Johns Hopkins Bloomberg School of Public Health, predicted that Congress would have the means to pay off debt from the COVID-19 fiscal packages, but the question was, "Will they have the political will to do so?"

In its response to the pandemic, Congress should continue borrowing and enact bold policies to reduce income inequality while also addressing public health concerns, or consumers and workers who are afraid of becoming sick won't participate in the recovery and the economy won't rebound, he said.

"Too many people are living paycheck to paycheck while working for companies that are making record profits," he said, suggesting universal health care, livable wages and affordable education and housing as issues where policy changes are overdue.

"These are all things our society can afford but refuses to do because superwealthy people don't want to pay their share of taxes," Gaskin said.

Lawmakers at a House Budget Committee videoconference hearing on Wednesday were told that stopping fiscal stimulus efforts, such as expanded unemployment insurance coverage, could plunge the nation into an economic free fall.

and other measures, and to put off the debate over tax hikes and spending cuts until after the country fully recovers.

"To be clear, I am not suggesting that debt can rise indefinitely relative to GDP, which is what would happen under current law," Elmendorf said. "We will ultimately need to raise taxes and reduce spending substantially. But we can wait to do that until we have rebuilt a vibrant economy with full employment."

Lawmakers from both parties acknowledge that Congress will have to consider paying for the COVID-19 relief down the road. Sen. Ben Cardin, D-Md., told Law360 that when that time comes, lawmakers could look at eliminating the carried interest tax break — which treats profit earned by investment managers as capital gains rather than ordinary income — as one way to raise revenue to pay off the national debt from the virus relief bills.

"We're going to need revenue at some point," he said, adding that the timing for that discussion is uncertain. "I just don't know how long our economy is going to be in the dumps."

Eventually Congress is going to have to discuss how to pay back, with interest, the money America borrowed and added to the deficit, Sen. James Lankford, R-Okla., told Law360.

"This is not just free, printed money. These are all loans that have been taken out," he said.

Andrew Moylan, executive vice president of the National Taxpayers Union Foundation, said that rather than raising taxes, Congress should look to entitlement reform and spending cuts to get rid of long-term federal debt. The economy won't benefit from the "cavalcade of proposals to increase taxes" coming from Democrats if they win control of Congress and the White House in the November elections, he said.

Instead, congressional lawmakers should look to restrain the growth of Medicare and Social Security without making drastic cuts, he said. The NTUF and the U.S. Public Interest Research Group recently released a bipartisan list of entitlement reforms.

Moylan predicted that lawmakers might have conversations about tax reform in the next Congress, but not about cutting taxes.

"I would be surprised if you would see some kind of significant revenue-reducing tax reform make its way through Congress," he said.

starts to expire. In 2022, the TCJA's 100% bonus depreciation provision begins to phase out before fully expiring four years later.

Then, in December 2025, dozens of provisions from the 2017 tax law will expire, including the enhanced child tax credit, increased standard deductions and lower individual income tax rates. Other provisions expiring that year include the cap on deducting state and local taxes and the increased exemption on estate and gift taxes. When faced with a fiscal cliff from expiring tax provisions — much like what happened in 2013 when the tax cuts enacted under the Bush administration expired — Congress generally finds it too difficult to let the provisions evaporate.

Chris Edwards, director of tax policy studies at the Cato Institute, said economists arguing in favor of increased borrowing at the current low interest rates are ignoring the problem of paying back the loan principal that could cause Congress to raise taxes.

"Every dollar borrowed causes damage down the road from the resulting higher taxes extracted from the private sector," he said. "Furthermore, interest rates may spike, which will increase federal borrowing costs as accumulated debt is rolled over."

He predicted that rising federal debt would prompt efforts to hike taxes on all Americans, not just on the wealthy, possibly through the enactment of a European-style value-added tax on consumers.

The lesson from COVID-19 is that policymakers were not ready, Edwards said.

"Congress should be looking ahead and trying to avert future threats, and the giant federal debt is a huge threat," he said.