Carbon Tax For EU Economic Recovery Could Be Tough Sell


Law360 (June 8, 2020, 7:40 PM EDT) -- The economic fallout from the novel coronavirus pandemic could prompt European Union countries to expand environmental taxation to help rebuild government coffers, but those measures also could trigger a backlash from a public that is already struggling financially. 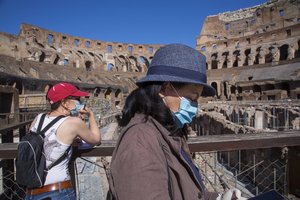 This year's shutdown across Europe amid the novel coronavirus pandemic has prompted European Union leaders to consider environmental taxation as part of measures intended to ease the economic shock. (AP)

The European Commission has included environmental taxation among its recent proposals to help countries recover from the economic shock caused by the pandemic, which has forced business closures throughout the region. Specialists say that urgent revenue needs may initially push governments to maintain taxes on both pollution and labor, rather than increase the former to decrease the latter, and that any new measures could risk a public response that echoes protests against France's fuel tax.

But EU countries may still have an opportunity to enact longer-term environmental taxes, providing the measures aren't seen as unfairly targeting people's behavior. If the cards are played the right way, the current crisis presents a chance to make major investments in the environment, according to Ioana Marinescu, an assistant professor at the University of Pennsylvania School of Social Policy & Practice.

"The issue is how to design a plan that is economically meaningful and politically popular enough that would help with recovery from the current coronavirus recession while addressing the environmental issues that Europe and the world are facing," she said.

The commission, the EU's executive branch, discussed "unlocking investment in clean technologies and value chains" as part of a widely awaited €750 billion ($847 billion) economic recovery program, released May 27. To help with funding, the commission proposed a so-called carbon border adjustment mechanism, which is intended to make it more expensive for companies to import items from countries with weaker environmental rules, according to the plan.

The program followed a separate document, released May 20, in which the commission suggested countries could help support medium-term economic recovery with a shift from labor to environmental taxation.

Labor taxes — personal income taxes and social security contributions — are the largest tax category in an overwhelming majority of the countries that belong to the Organization for Economic Cooperation and Development, according to a March 2019 report from the Paris-based organization. Specialists say countries probably won't want to reduce this revenue source while seeking a corresponding tax increase on pollution, at least in the near future.

It's more likely that in the short term, countries are going to rely on both labor and environmental taxation, according to Daniel Bunn, vice president of global projects at the right-leaning Tax Foundation.

"I think everybody is going to be stretched for revenue to such an extent that they will be looking for ways to maintain current plans for taxation," he said.

Meanwhile, any increases to taxes — especially during an economic crisis — could be a "a very difficult lift," according to Marinescu, at Penn.

To make a carbon tax politically feasible, "you would have to be very upfront about what the expected benefits are," she said.

"I suspect that just saying that it would benefit the environment might not be enough," Marinescu said.

Rather, countries would have to make a point about how environmental measures would help with European economic recovery, such as creating jobs, according to Marinescu.

She cited the yellow vest movement in France as an example of the backlash that could result if the public doesn't perceive any benefits associated with a tax increase.

The demonstrations began in 2018 by the so-called gilets jaunes, known for the fluorescent yellow vests worn by people protesting the high price of road fuel and the general cost of living. French President Emmanuel Macron later canceled the higher fuel tax but refused to budge on his decision to revoke the wealth tax.

It's worth remembering what sparked the yellow vest movement, according to Femke Groothuis of the Ex'tax Project, a Dutch foundation that promotes shifting the tax burden in the economy from labor to natural resource use.

"People are angry about inequality, lack of opportunity and the lack of decent work," Groothuis said. "This means the future of environmental taxes will be defined by the flanking social policies and fair use of revenues."

The protests in France showed that it isn't possible to increase the tax burden on individuals as a way to change behavior, according to Gianmarco Monsellato, EU tax public policy leader at Deloitte.

In terms of funding the national budget, green taxes are by definition "useless," he said.

"If they work, they won't bring any euros into your coffer because they will incentivize people to go on green technology and not to use polluting technology," Monsellato said.

Meanwhile, if countries get revenue from an environmental measure, "it means your green policy isn't working," he said.

"It just means people are still polluting and being taxed," he said.

Environmental goals could still be tied to a country's revenue needs, however.

As part of the EU economic recovery fund, the commission proposed to help member countries with investments and reforms, including those in relation to green measures. The financial support will go toward "the resilience of national economies, linking these to the top EU priorities," according to a commission statement issued with the May 27 report.

The commission also discussed financial support for rural areas "in making the structural changes necessary in line with the European Green Deal," a major environmental initiative proposed in December.

In the current economic crisis, the commission could condition its investment in the member states on countries' commitment to environmental measures, according to Monsellato.

The commission "could use their own investment toward a green agenda," he said.

"They could try to develop, at the EU level, a standard for tax policy supporting the green transition," he said.

The commission could also expand carbon tax measures that it already has in place.

For example, the emissions trading system, or ETS, was set up in 2005 and is "a cornerstone of the EU's policy to combat climate change and its key tool for reducing greenhouse gas emissions cost-effectively," according to the commission.

The ETS probably has the best overall design, even though it has significant gaps, according to Bunn at the Tax Foundation.

"Focusing on closing those gaps would probably be most productive from an environmental taxation point of view," he said. "Other taxes could be layered on, but at some point you're going to be having multiple layers of taxes on virtually the same emission."

Bunn noted that the big questions about such an expansion, in addition to other potential measures, center on whether the revenue will go to the EU budget or to national governments, and whether there would be any offsets in other taxes.

As Groothuis of the Ex'tax Project saw it, the EU should focus on the role of taxes in the middle to long term while supporting national governments in defining their own measures.

"There is no need for specific EU policies if national governments take responsibility," she said.