Law360 (June 10, 2020, 1:53 PM EDT) -- The Dutch government said it viewed with caution plans to raise the European Union's own revenue collection capacity and was skeptical of the proposed size of a key European Commission novel coronavirus rescue fund. 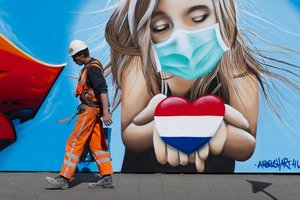 In April, a construction worker passed by a mural in The Hague, Netherlands, that showed support for those suffering from the effects of the coronavirus. (AP)

In a document published Tuesday and signed by the country's foreign and finance ministers, the Netherlands said it remained reluctant to introduce new sources of funding for the EU. It also questioned the need for a €750 billion ($851 billion) recovery fund.

The country also appeared to withhold judgment on the commission's proposals for a digital tax and a tax on companies using the EU's single market, which the bloc's executive body hopes will underwrite a rescue package to help the EU recover from the novel coronavirus crisis.

The Netherlands said the need for €750 billion is "insufficiently substantiated by the European Commission."

The commission didn't immediately respond to a request for comment.

In expressing reluctance about the need for the funds, the Dutch government is "challenging the commission, in a sense, to do a better job doing its homework," said Erik Jones, an Italy-based professor of European studies at Johns Hopkins University.

The Netherlands is perhaps the most vocal of a "frugal four" group of countries that have been skeptical of an expansive EU budget, even in light of the unprecedented drop in economic growth in the EU this year due to COVID-19, the respiratory ailment caused by the coronavirus. The other countries in the group are Sweden, Denmark and Austria.

Even though those countries are small, their potential opposition to any proposal would matter because EU governments must approve the rescue package unanimously. The Dutch document noted that the positions of EU member countries are still far apart.

"I think it's going to be a challenging set of negotiations for sure," Jones told Law360.

Another tax specialist said the Dutch document was "a thorough analysis." The country is "clearly getting ready for a fight, but at the same time it looks like they've been very careful in managing expectations in the letter," Pepijn Bergsen, a research fellow at London-based think tank Chatham House, said in a tweet.

"They oppose a lot (almost everything of value) but don't promise to veto," Bergsen said.

The Swedish, Danish and Austrian governments didn't immediately respond to a request for comment.

Spurred on by a joint initiative between Germany and France, the commission announced at the end of last month a plan for the rescue fund that would consist of two-thirds grants and one-third loans, which would help the EU rebuild from an economic drop that is expected to exceed 7% this year.

To help raise money to pay back the loans, the EU has proposed new taxes that would enhance the bloc's ability to raise money on its own rather than relying on contributions from national governments.

The commission proposed such "own resources" based on the EU's emissions trading scheme, a carbon-border adjustment that would make it more expensive for companies to outsource production to jurisdictions with weaker environmental laws. The commission also called for raising revenue from a digital tax and a thinly worded tax on "large companies." The commission has also made proposals for own resources based on a levy on nonrecycled plastic.

The Dutch document said that while the environmental impact of a tax on nonrecycled plastic would be difficult to assess, the government is "positive about this approach."