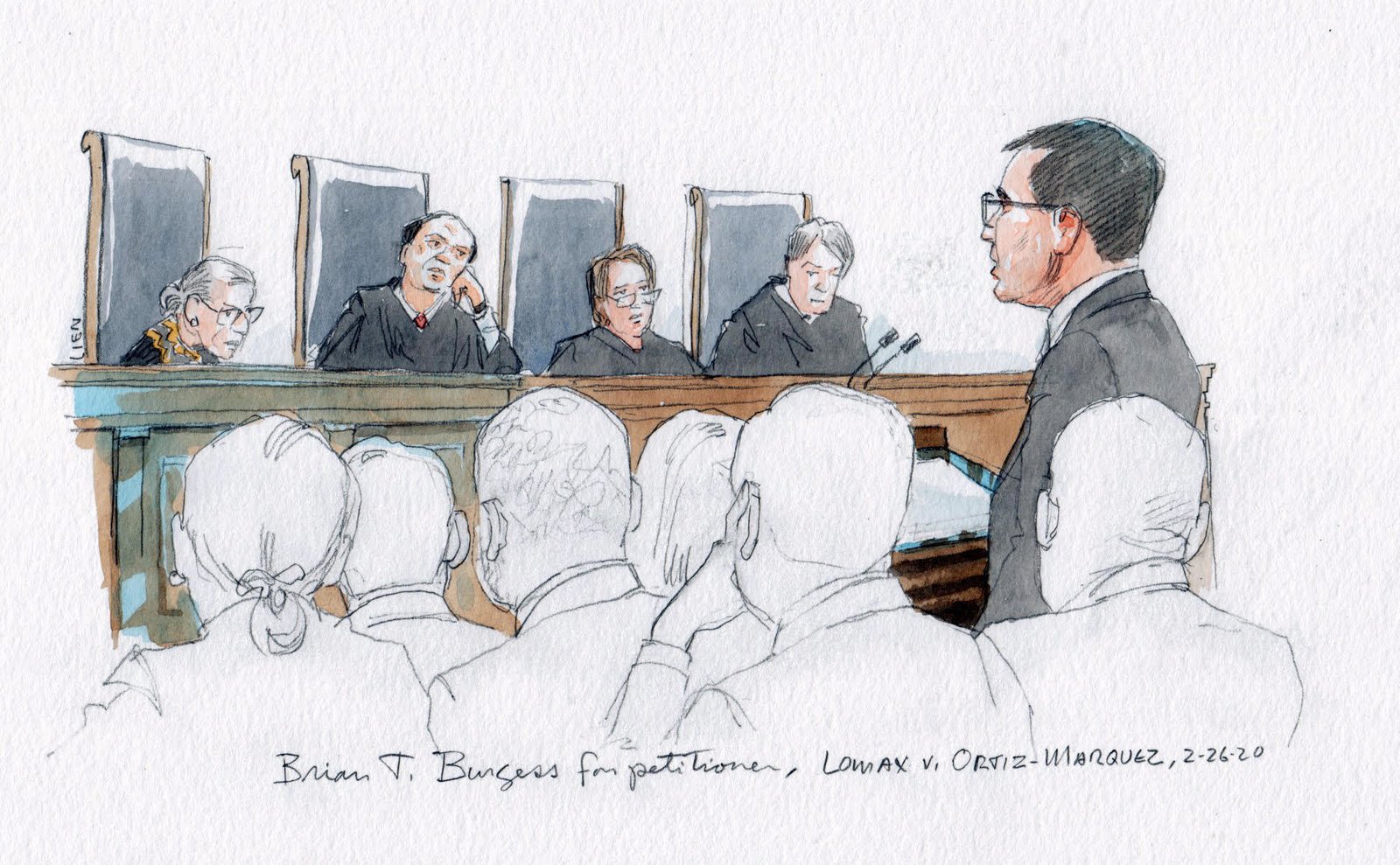 Appearing before the U.S. Supreme Court in February, Attorney Brian T. Burgess argued for prisoner Arthur Lomax that the dismissal of a suit without prejudice shouldn't count as a strike under the Prison Litigation Reform Act. The justices ultimately ruled against Lomax, setting up a new obstacle for prisoners representing themselves. (Art Lien/courtartist.com)


Prisoners who represent themselves in court have a new hurdle to clear because of the U.S. Supreme Court's holding that they will lose their fee-waiver status after three certain types of unsuccessful federal lawsuits, no matter if they weren't dismissed on the merits.


In a unanimous ruling Monday in Lomax v. Ortiz-Marquez

Under the rule, a prisoner accrues a "strike" each time they have a federal lawsuit dismissed for being frivolous, malicious or failing to state a claim. After receiving three strikes, prisoners can no longer obtain "in forma pauperis" status in a subsequent lawsuit in order to avoid paying the upfront $400 filing fee; prisoners ultimately pay the fees through a garnishment system out of their prisoner trust account.

A minor expense for many litigants, upfront filing fees can be an insurmountable barrier for prisoners serving long sentences who are trying to sue to better their confinement conditions. Indeed, The Journal of the Academy of Psychiatry and the Law has recognized that "the provision of comprehensive correctional mental health care is largely the result of successful litigation from prisoners."

"Being in prison or jail means lacking the ability to earn money in the way that other people can, and minimum wage laws don't apply to prisons. There is a far greater demand for work, generally speaking, than there is availability for work ... in that context, the filing fee is enormously significant," said David Shapiro of the Roderick and Solange MacArthur Justice Center, who filed an amicus brief in the case.

Resolving a yearslong circuit split, the court held in Lomax that prisoners will receive a strike regardless of whether a lawsuit dismissed for failing to state a claim was done with or without prejudice. Colorado prisoner Arthur Lomax, who filed his latest lawsuit against prison officials after he was expelled from a sex-offender treatment program, argued that he shouldn't get a strike for a case that a judge dismissed without prejudice.

Justice Elena Kagan's textualist opinion, which was joined by all eight other justices, soundly rejected that argument and said that Congress clearly included both types of dismissals when it passed Section 1915(g), the provision of the three-strikes rule in question.

"Under that provision, a prisoner accrues a strike for any action 'dismissed on the ground that it ... fails to state a claim upon which relief may be granted,'" she explained. "That broad language covers all such dismissals: It applies to those issued both with and without prejudice to a plaintiff's ability to reassert his claim in a later action."

To accept Lomax's argument, the court would have to read the word "dismissed" as "dismissed with prejudice," Justice Kagan said. "But this court may not narrow a provision's reach by inserting words Congress chose to omit," she added.

The lower circuit courts had long disagreed on the issue. The Third and Fourth circuits had taken a more prisoner-friendly approach, holding that dismissals for failure to state a claim that are done "without prejudice" do not count as a strike. Others, like the Tenth Circuit in Lomax's case, held the opposite.

"In line with our duty to call balls and strikes, we granted certiorari to resolve the split, and we now affirm," Justice Kagan said.

Shapiro said Monday's ruling was the latest PLRA ruling based on a strict textual analysis of the statute.

"I can't quarrel with the outcome on the issue that was actually before the court," Shapiro said. "That to me seems like an accurate reading of the statute."

"If one disagrees with the breadth of the strikes or other provisions of the PLRA, I think that for the most part that's a result of what Congress did and the lower courts have done," he added. "Generally, the Supreme Court has tried to honor the language that Congress wrote."

But Shapiro recognized how important being able to obtain "in forma pauperis" status is for prisoners to file lawsuits, which have historically been an engine for bettering confinement conditions across the country. "It's pretty easy to get three strikes, particularly if you're in on a long sentence," Shapiro said. "Oftentimes these strikes are the result of prisoners just not knowing the law and being by far the highest category of litigants are pro se. So they don't, unlike other litigants, have a lawyer who they can go to who will say, 'This is a bad idea, don't file this case.'"

That's why Lomax, with help from the National Association of Criminal Defense Lawyers, opposed treating a dismissal without prejudice as a strike.

Congress meant to stem the tide of abusive and meritless litigation in the PLRA, not merely defective lawsuits that involve "potentially meritorious, but poorly pled claims," the NACDL said in an amicus brief.

To that end, the Supreme Court's ruling on Monday reassured in a footnote that "the provision does not apply when a court gives a plaintiff leave to amend his complaint," pointing out that "courts often take that path if there is a chance that amendment can cure a deficient complaint." Notably, Justice Clarence Thomas did not join that footnote.

"Although the court's decision will certainly change the playing field for prisoners in the Third and Fourth circuits (where a without-prejudice dismissal will now count as a strike), footnote 4 enables district courts to exercise their inherent equitable powers to leave the courthouse doors open to potentially meritorious, but poorly drafted, claims," said Dawn Murphy-Johnson of Miller & Chevalier Chtd., who helped represent the NACDL in the case.

"The court's decision comes as the result of its strict interpretation of the statutory terms, an approach that we hope the courts will apply even when doing so favors the prisoner," Murphy-Johnson added.

According to New York Law School professor Molly Manning, who has studied the three-strikes rule, the Supreme Court's footnote raises a number of other questions that could potentially produce more circuit splits.

"I don't know why it's not in the body of the decision when it's carving out this massive exception to what the whole decision stands for," Manning said of the court's footnote. "It's going to cause more circuit splits and more confusion is my prediction."

The three-strikes rule, and the Prison Litigation Reform Act in general, was meant to stem the tide of what Congress considered to be frivolous prisoner litigation that has clogged the federal court system. But the extended litigation over what qualifies as a strike and what doesn't has, ironically, produced endless litigation and no shortage of disagreement among the court system, according to Manning.

The court's latest decision in Lomax, which Justice Kagan described as an "easy call," will likely contribute to that mess, Manning said. "It's going to be just as problematic as before."