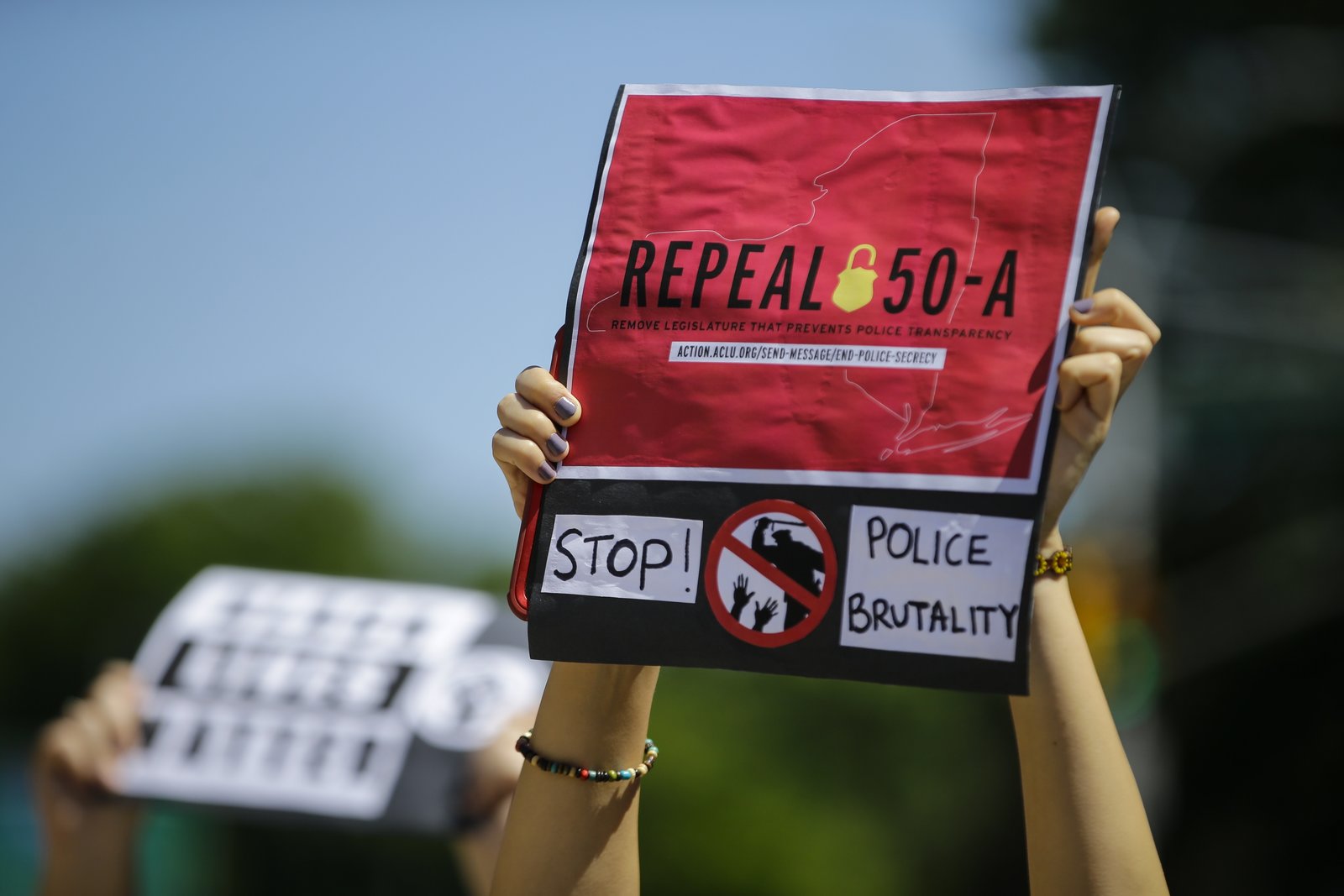 
In the days after white Minneapolis police officer Derek Chauvin was filmed pressing his knee into the neck of a black man named George Floyd — killing him and sparking nationwide protests — multiple media outlets reported Chauvin had received 18 use-of-force or misconduct complaints over his 19-year career in law enforcement.

The information fueled public fury over police accountability and helped pave the way for a second-degree murder charge against Chauvin, who was fired within 24 hours of the May 25 killing.

But in many states, such a quick release of his personnel file wouldn't have been possible. Public records laws in 18 states exempt officer disciplinary reports and misconduct allegations from disclosure requirements, and another 18 states allow only limited access to that information.

Spurred by public demands for increased police accountability, those laws are now coming under intense scrutiny.

When New York Gov. Andrew Cuomo signed the repeal bill Friday, he applauded the state Legislature for passing the most "aggressive reforms in the nation."

"Today is about, enough is enough," he said.

We need to speak out to make a difference. 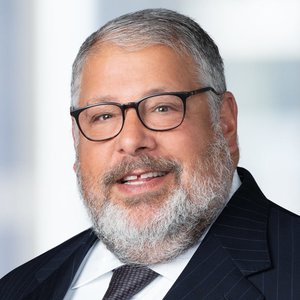 This time, however, support for increased transparency overwhelmed those concerns. From a statement signed by stars Rihanna, Lizzo, the Jonas Brothers and more than 750 other musical groups to a letter from 30 major New York law firm leaders, a broad coalition of constituents was clear about the need for change.

Morrison & Foerster LLP chair Larren Nashelsky spearheaded the letter and told Law360 that, while firms don't typically wade into criminal justice advocacy in such a direct way, the ongoing uprising is unlike previous protests over killings by law enforcement.

"When we see these opportunities to have our voices heard individually and collectively with other firms, we're ready to do that," he said, adding that approximately 25,000 lawyers were represented by the firms' letter. "We need to speak out to make a difference."

Despite language that explicitly shields officers' addresses, phone numbers and some other identifying information, not everyone was pleased with the repeal legislation.

Patrick Lynch, president of New York City's police union, warned in a statement Wednesday that released records "will be stitched together to further the false anti-cop narrative" — a narrative he blamed for the murder of two officers following a grand jury's refusal in December 2014 to indict Pantaleo for Garner's killing.

"The unfettered release of police personnel records will allow unstable people to target police officers and our families for harassment or worse," he said. "While lawmakers pound their chests about exposing 'bad cops,' all of the 'good cops' and our families are now in jeopardy."

When 50-a became law in 1976, it was intended to protect New York police officers from "harassment" at the hands of criminal defense lawyers during cross-examination — not vigilantes out to attack cops.

"Simply as a harassment tactic, defense attorneys in criminal cases have been making an unrealistically high number of requests for the personnel files of police officers scheduled to testify against their clients," he wrote.

Other statutes around the country had similar origins, and where state laws don't explicitly exempt police records, unions have made sure to secure contractual privacy protections. In Connecticut, for example, the state police recently signed a deal that limits public access to personal information, and they've since interpreted the protection to include a trooper's entire personnel file. 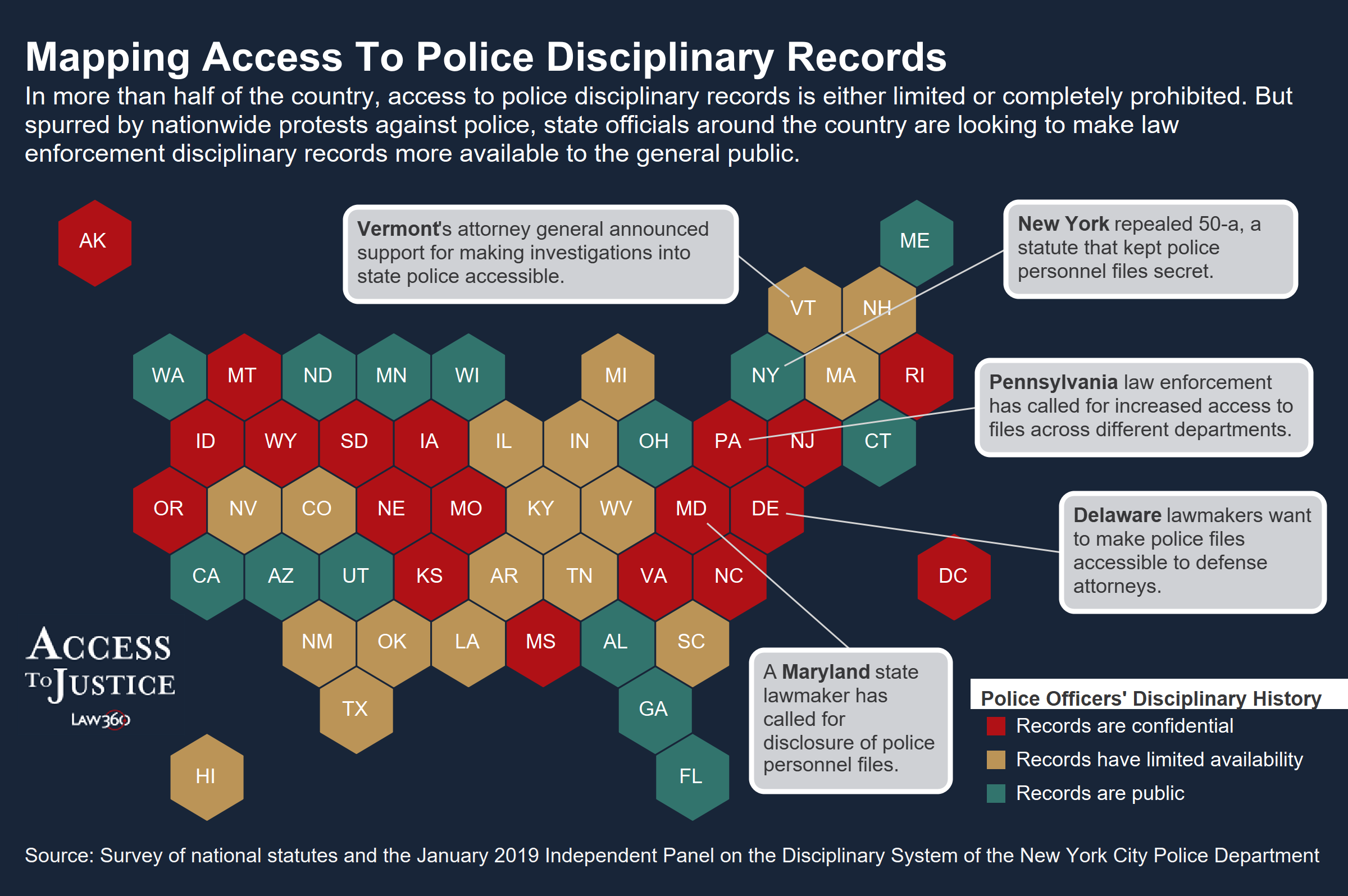 Purging is also commonplace: A 2017 law review article by Stephen Rushin, a professor at Loyola University in Chicago, found that 87 out of 178 police contracts around the country had language requiring "the removal of personnel records at some point in the future."

Despite the widespread efforts to restrict information flow, states with more permissive records laws and police union contracts do not experience higher rates of violence against police, said Barry Scheck, co-founder of The Innocence Project and a partner at Neufeld Scheck & Brustin LLP.

"Take states like Florida and Georgia … there are no instances of police officers being harassed or injured or anything like that," he said. "It's a matter of course that you file an open records request and get anything in the police officer's personnel file involving misconduct or allegations of misconduct. The sky hasn't fallen there."

For decades, the NYPD made available basic information about substantiated disciplinary charges, including things like the offense, the imposed penalty and the officer's name. But in 2016, the department's Legal Bureau determined that those disclosures were inconsistent with 50-a and advised the department to stop.

According to a January 2019 independent panel review of the NYPD's disciplinary system, the resulting opacity proved "especially hurtful to those injured or killed in police-related incidents and to their loved ones."

"Denying those directly affected by police misconduct access to information on police discipline serves no one's interest," the review found. "More broadly, lack of transparency impedes the department's efforts to show the public that it holds officers accountable for their conduct."

The lack of transparency can also affect criminal prosecutions by preventing district attorneys from knowing whether arresting officers or police witnesses have been previously disciplined.

A U.S. Supreme Court concept known as the Brady doctrine requires prosecutors to disclose favorable, material evidence to defense attorneys. But according to a 2015 Stanford Law Review article by University of California, Hastings law professor Jonathan Abel, laws like 50-a routinely suppress "critical impeachment evidence" about an officer's trustworthiness on the stand.

"Privacy protections for police misconduct are incompatible with core aspects of the Brady doctrine," he wrote.

Lynda Garcia, policing campaign director at The Leadership Conference on Civil Rights, told Law360 that increased access to records can also have a profound impact for the defense.

"If you're a defender, and you have access to that information right off the bat, it goes to an officer's credibility," she said.

If Congress is able to get a national database law passed, that is going to be a really big deal. 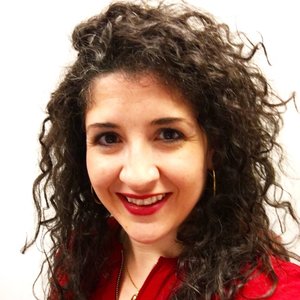 But while Garcia applauded the successful 50-a repeal, she added that changing a law doesn't guarantee compliance.

California lawmakers repealed a public records law in 2018 to increase access to police disciplinary reports, only to see law enforcement groups drag their feet in making disclosures — even to the point of fighting litigation from news organizations for internal reports on police killings.

"Just having the access to these records is huge, but that's not to say departments aren't going to put up a fight," Garcia said. "Even where there are good sunshine laws, there's a million excuses or reasons they'll say they can't release the records."

The Push for a Database

The fact that New York repealed its law in spite of union opposition demonstrates how the ongoing Black Lives Matter movement is changing the political calculus for elected officials, according to David Harris, a University of Pittsburgh law professor and host of the podcast "Criminal Injustice."

"With these massive demonstrations, it's not just young black people — it's all kinds of people," Harris said. "And that's the difference a truly democratic response can make; that many people in that many places can really grab a politician's attention."

A state senator in Maryland has proposed a similarly broad reform of that state's version of a 50-a law, but Harris noted other reforms being proposed around the country seek to provide more meager access to misconduct files.

In Pennsylvania, for example, state Attorney General Josh Shapiro this month declared his support for "ending the practice of law enforcement agencies unknowingly hiring officers with documented patterns of excessive use of force or other misconduct."

The statement was backed by Philadelphia's police commissioner, Pittsburgh's police chief, the president of the state police union and the Pennsylvania District Attorneys Association, but Harris said the proposed reform wouldn't increase access for everyday citizens.

"It's great if maybe they won't hire some guy involved in a terrible incident," he said. "That's a significant, good step … but it's not the same as exposing the record to the public."

Meanwhile in Delaware, Democratic lawmakers have proposed rewriting the state's Law Enforcement Officers Bill of Rights to give criminal defense attorneys access to accusations of wrongdoing.

And in Vermont, the state attorney general, at least one state senator and the state's commissioner of public safety have all indicated support for making internal affairs investigations of state police publicly accessible.

Ed Hutchison, president of the National Police Association, said the organization supports laws that provide records after "a judge has had the opportunity to hear the concerns of the officer and has determined the information is material to the requester."

But he said too much disclosure — especially of complaints that have not been investigated or were found to be false — could incite attacks by "violent opportunists or domestic violent extremists."

"As long as law enforcement remains unique in being the only employment which results in employees being targeted for shootings, stabbings, and being run over with cars simply because of the uniform, states have a unique duty to mitigate targeting of law enforcement officers to the best of their abilities," Hutchison said in a statement to Law360.

Garcia said the wave of reforms is encouraging, but she suggested a more national solution to the problem of police records accessibility: a centralized database tracking police misconduct.

"More mandated, automatic reporting and publishing is an ideal that we should strive for," she said. "If Congress is able to get a national database law passed, that is going to be a really big deal."

The Justice in Policing Act that Democratic lawmakers proposed last week aims to do exactly that by establishing a "National Police Misconduct Registry."

Sen. Cory Booker said in a statement that the proposal would hold law enforcement accountable and ensure "police abuses are better tracked and reported."

Garcia said the registry could provide the transparency necessary to restore public faith in police.

"Law enforcement agencies work on behalf of the people, funded by taxpayer dollars," she said. "For the public, seeing that Officer A and Officer B have these histories of misconduct offers an opportunity to hold the police department accountable."