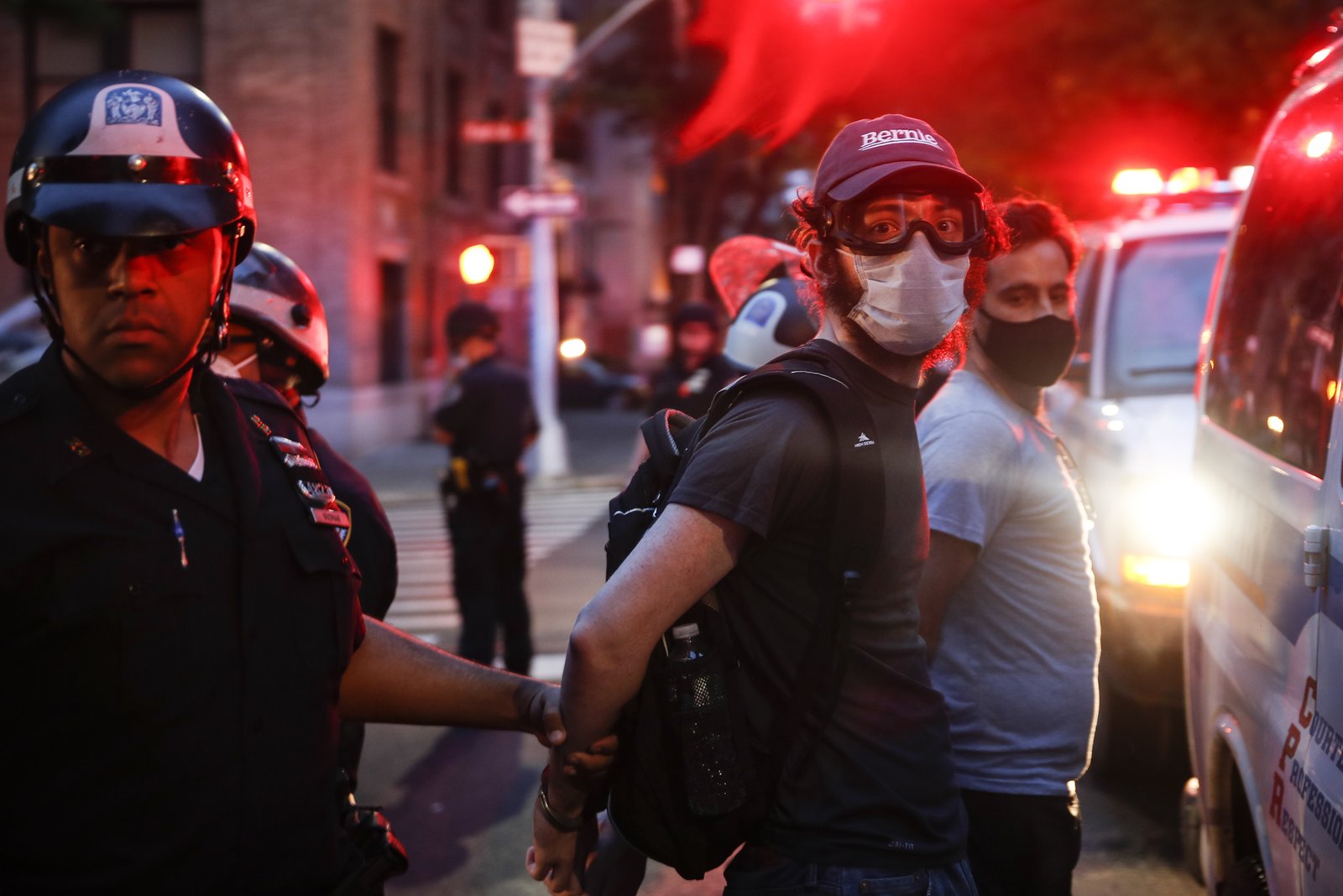 Police arrest protesters in New York for violating curfew in early June. Legal advocates are concerned about the spread of COVID-19 as people are arrested and await legal processing. (AP Photo/John Minchillo)


As the nation looks to address widespread calls for police reforms following the killing of a black man in police custody in Minnesota, legal advocates are also pushing for authorities to learn from how they handled the recent stretch of protests and, in some cases, looting amid the COVID-19 pandemic.


Aside from allegations of excessive force by police during the protests following the death of George Floyd, far too many people were corralled into tight spaces amid the dangers from the novel coronavirus, said Kate Levine, an associate professor of law at the Benjamin N. Cardozo School of Law at Yeshiva University.

Police should not be arresting individuals who are peacefully exercising their First Amendment right to protest, said Ann Mathews, managing director of the criminal defense practice at Bronx Defenders. And if cops do cuff peaceful protesters, district attorneys should decline to prosecute them, Mathews said.

"It's a public health issue, apart from the issue of justice," Levine said. "People don't need to be detained in unsafe and unsanitary conditions."

Looking at images of thousands of people gathering to protest amid the COVID-19 pandemic is concerning for Levine, who worries that the gatherings may lead to further transmissions of the virus.

But she understands that for many, the issue of police brutality and systemic racism is also a matter of life and death.

In recent days, district attorneys in several New York City boroughs where the protests occurred said they would not prosecute charges for relatively low-level offenses, such as unlawful assembly.

"The prosecution of protesters charged with these low-level offenses undermines critical bonds between law enforcement and the communities we serve," said Cyrus Vance Jr., Manhattan's district attorney, in a June 5 statement.

Prosecutors in Brooklyn reached similar conclusions on low-level charges, with Brooklyn District Attorney Eric Gonzalez as of Thursday authorizing arraignments for only 13 cases, involving more serious charges such as criminal mischief and attempted assaults, said Oren Yaniv, a spokesman for the office.

"The DA has said that we will review each one of them and dismiss those involving non-violent protest," Yaniv said of the arrests for low-level charges.

In Manhattan, where there was widespread looting of retail businesses and hundreds of related arrests on charges such as felony burglary, the criminal court at one point created additional virtual arraignment sessions to deal with the added caseloads, said Lucian Chalfen, a spokesman for the New York State Unified Court System.

Despite the technical accommodations, hundreds of people were detained in New York in cramped conditions for more than a day before seeing a judge, violating a state law that requires arraignments within 24 hours from the time of an arrest, according to a lawsuit filed on June 3 by The Legal Aid Society.

The Legal Aid Society contended that the NYPD was slow-rolling arrests of protesters as payback for demonstrations against police brutality.

"New Yorkers are ... being held illegally, deprived of due process and needlessly subjected to increased risk of contracting COVID-19, endangering each of them as well as the entire community," said Tina Luongo, attorney-in-charge of the criminal defense practice at The Legal Aid Society.

But New York Supreme Court Justice James Burke on June 4 rejected The Legal Aid Society's request that he unilaterally free those still under detention at the time, finding that the system was dealing with a "crisis within a crisis," referring to the deployment of virtually the entire police, all amidst the COVID-19 pandemic.

Anticipating that there would be additional case volume following Floyd's death, the Philadelphia District Attorney's Office redirected assistant district attorneys and other staff from other units to work instead on ensuring that the process of charging individuals operated as efficiently as possible, all amidst the pandemic, said Jane Roh, a spokeswoman for the office.

Many of the arrests made by Philadelphia police resulted in code violation notices, which did not prompt referrals to the DA's office for prosecution, Roh said.

"Our prosecutors, paralegals and other staff have not stopped working throughout the COVID-19 pandemic, which has forced the entire criminal legal system to function more virtually, with far more reliance on electronic communications technologies," Roh said.

The Los Angeles Police Department faced criticism from the University of Califonia, Los Angeles, and several instructors for using the school's Jackie Robinson Stadium as a makeshift jail for violators of the city's curfew, purportedly without obtaining the school's permission. Authorities packed in the violators into a location that until recently had been used as a testing site for COVID-19.

"The cruel irony that this took place at a location used a COVID-19 testing site is not lost on those arrested or on us," according to a letter from the UCLA professors.

City Attorney Mike Feuer's office later announced that it would not prosecute those arrested on charges of curfew violations or for failing to disperse.

Most of the arrests had resulted in cite-releases, which meant that Los Angeles County Superior Court would not receive a formal filing from prosecutors until a week before a date to appear at least 30 days in the future, said Mary Eckhardt Hearn, a spokeswoman for the court.

Courts had closed at several locations throughout California as a precautionary measure due to concerns over looting and violence, including in Los Angeles County. But as many employees were already working remotely due to the coronavirus, the closure in Los Angeles had a minimal impact, Hearn said.

"The court has made many adjustments in response to the threat of COVID-19," Hearn said. "The increased filings resulting from the civil unrest will add another challenge to our operations, especially as we prepare for a phased reopening."

On a regular day, the nation's criminal court systems can experience backups, with arrestees held in confined conditions. Throw in COVID-19 and mass arrests for looting or low-level offenses, and the recipe for additional coronavirus cases becomes an easy one, said Linda Hoff, an attorney at Brooklyn Defender Services.

Ideally, it would be even easier for authorities to use proper judgment and only arrest those suspected of more serious charges such as looting, as opposed to detaining peaceful protesters, she said.

"Putting people in close proximity in cells, there's no need for that right now," Hoff said.