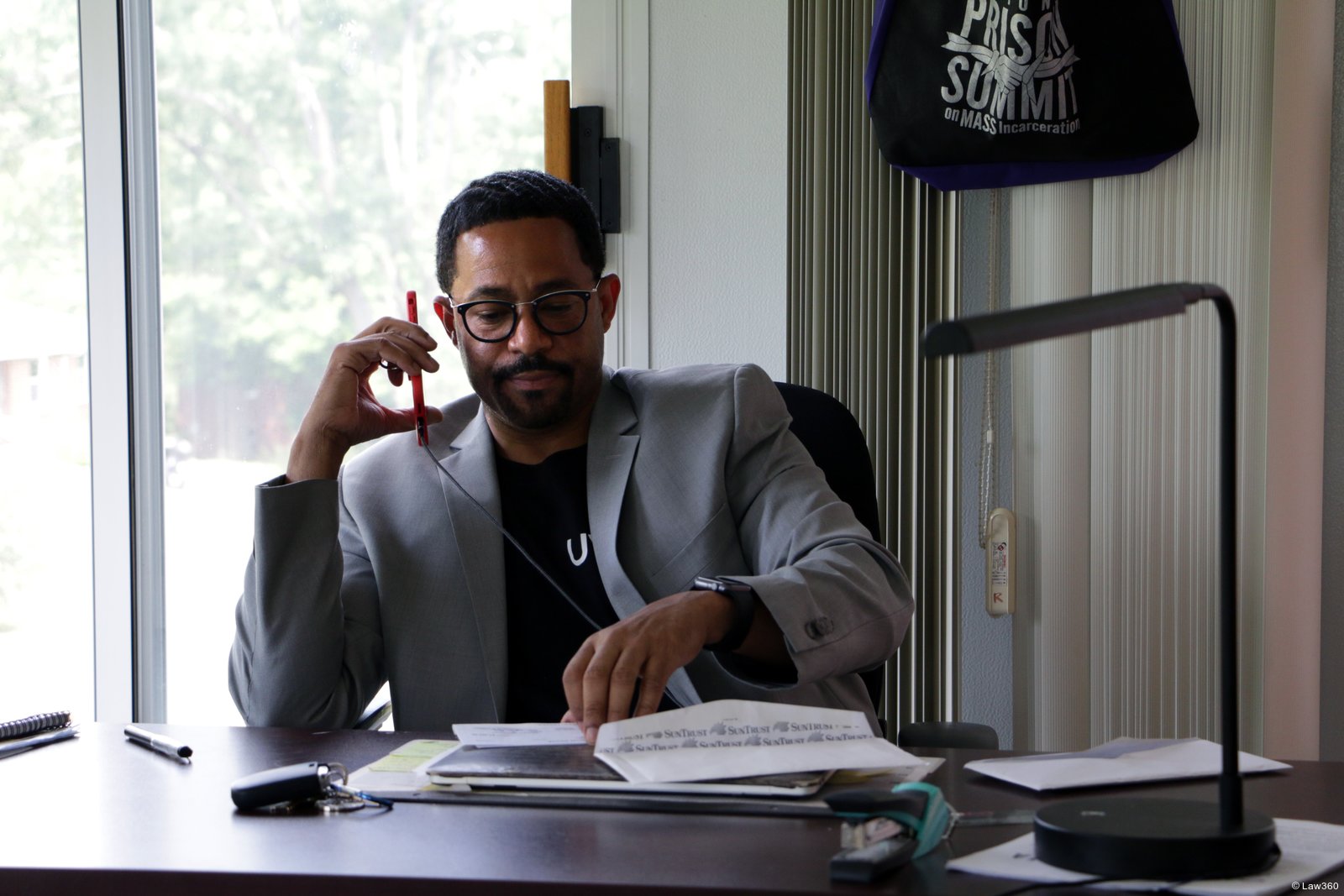 Rahim Buford, manager of the Nashville Community Bail Fund, works at his office in between bailout trips to local jails. His organization has received an unprecedented level of donations after the police killing of George Floyd. (Annie Pancak | Law360)


The Minnesota Freedom Fund is a small nonprofit that since 2016 has paid bail for people being held in jail pretrial.

Less than a month ago, the fund was posting a maximum of $1,000 per day. But after the killing of George Floyd by Minneapolis police officer Derek Chauvin, something extraordinary happened: Spurred by celebrity endorsements and "match" campaigns, more than 1 million people donated over $35 million total to the MNFF in three weeks.

"We're usually in the ballpark of $100,000 in annual donations, in a good year," said Jared Mollenkof, a public defender and MNFF board member. "There's no way to compare what is normal to this moment."

Just $250,000 of that money has been spent bailing out protesters during the ongoing uprising against police violence and racial injustice, in part because most Minneapolis-area protesters who were arrested have been released without bail.

But having already paid "all the protest bails that have come our way," the MNFF said it's interested in going further — and maybe even bailing out all those incarcerated in the Hennepin County jail.

"We are working with a group of arrestees who will help coordinate support for those fighting charges," the group said on Twitter. "Support starts with legal representation, court fees and transportation, and starts with $150,000… We aren't going to leave folks hanging, just like we aren't going to stop paying bail."

The wave of donations flooded the coffers of more than just the MNFF.

In Chicago, a bail fund that might normally raise $12,000 in a two-week span received roughly $5 million. In Brooklyn, a group received more than $1.8 million, even though its work now focuses on immigration bonds, not criminal bail. In Nashville, a fund that typically receives $50,000 in a year has received more than $100,000 since Floyd's killing.

"Prior to this, we had to worry too much about keeping the operation going," said Rahim Buford, the Nashville Community Bail Fund manager. "Now we can focus on trying to bring about structural change."

In total, at least $70 million has been donated to nearly 100 bail funds around the country since Floyd's killing, according to Pilar Weiss, director of the Community Justice Exchange. Some of that money has gone to 50-plus new funds created to help bail out those arrested during the ongoing Black Lives Matter protests, said Weiss, whose group oversees the National Bail Fund Network.

"We're hopeful that this much interest and broad support for bail funds and the movement to defund the police and for Black lives means that … in some places, perhaps bail funds will no longer need to exist very soon," she said.

For Mollenkof, the outpouring of support for Black Lives Matter protesters reflects the fact that more and more people are realizing "how disgusting of an idea it is to hold people in custody, pretrial, for exercising their right to protest."

He hopes the realization about protest bails leads donors to a deeper epiphany: the idea that any kind of pretrial incarceration, for any charge, is antithetical to the concept that defendants are innocent until proven guilty.

And while bail funds have previously seen donations and media requests spike following police killings, Mollenkof said that the current uprising is unlike any that came before it.

"The leverage we have in this moment is the kind of leverage that can break the bail system, and we will use it to do that," he said. "We will end cash bail in the state of Minnesota and, I hope, in America."

During one recent spree, Mollenkof said the fund made $92,000 in bail payments in just one hour, but he added that freeing everyone incarcerated pretrial will take time due to the fact that bail is a "logistical nightmare." Payments must be made in person, in cash, and arrangements must be made to ensure released defendants have somewhere to go and some way to get there.

"We bailed out seven people last night," Mollenkof said Wednesday, adding that the fund has bailed out more than 50 since Floyd's killing. "That volume, for us, would normally take two weeks. So seven people in one evening is a real escalation. … The momentum is building."

Funds like the MNFF have long been at odds with the American Bail Coalition, an organization that promotes the bail bond industry. Its director, Jeffrey Clayton, told Law360 on Friday that he is concerned the MNFF may have bailed out several people charged with serious wrongdoing, including one man released on a $75,000 bond after allegedly shooting a gun at two police officers.

"If you look at the data, they're going to have to bail out hardened criminals in order to spend the money they raised," he said. "The small bonds aren't enough to add up to $30-plus million."

Clayton also questioned the unregulated nature of community bail funds and whether those bailed out by a charitable fund are as likely to return to court.

"It kills the incentives to return to court because nobody's on the hook. If it was a friend or relative [paying the bond], they're on the hook," he said.

Mollenkof declined to comment on any specific individuals the MNFF has bailed out but cast doubt on the attempted murder allegations made by the Minneapolis Police Department, pointing out "international demands for its dissolution."

"There is no chance we would leave someone in custody based on their claims," he said. "Furthermore, we will be bailing out people in the future that bail lobbyists like the American Bail Coalition will claim are not worthy of pretrial freedom, and we just fundamentally disagree with them about the value of the lives and time of people held in custody pretrial."

Like many of its peer groups, including the dozens that have sprouted up since Floyd's killing, the Chicago Community Bond Fund began in response to police brutality.

Its origin incident was the police killing of DeSean Pittman, a Black 17-year old, in August 2014. During an ensuing vigil, five of his friends and family members were arrested and taken to the Cook County jail. To help free them, the family worked with what would become the CCBF's founding members to raise nearly $30,000 over a four-month span.

"Our existence is rooted in people resisting police violence," said Sharlyn Grace, the fund's director. "All the support coming to bail funds has to be understood as support for Black Lives Matter more broadly."

In its first year, the CCBF posted more than $300,000 to free 45 people from jail or house arrest, and last year, it managed to pay over $550,000 to free 108 people. The group has also expanded into other advocacy activities like court watching, legislative and judicial lobbying, and referring plaintiffs for class action lawsuits.

For example, the CCBF's efforts helped pressure Cook County Chief Judge Timothy Evans to issue a general order instructing judges to set money bonds only in amounts that people can afford to pay, leading to a 1,400-person decrease in the local incarcerated population over three months.

Since May 28, the fund has paid more than $380,000 to free more than 115 people, mostly protesters. The volume is just a fraction of those arrested during protests in Chicago because many were released without having to pay money, a development that the CCBF called "a direct consequence of our organizing efforts over the last four years."

Now the group can power even more research and lobbying, in addition to its direct bail work: On Wednesday, Grace submitted a letter and petition with 2,500-plus signatures to Cook County State's Attorney Kimberly Foxx, urging the prosecutor to stop filing new charges in cases that don't endanger specific individuals.

While grateful for the influx of new funding, Grace said she worries about "a fetishization of bail funds" obscuring the other work she considers necessary to the cause.

"It reflects a desire for immediate gratification because it's so concrete," she said. "You pay $5,000 or $25,000 and you secure someone's freedom and it happens right now. But in order to end police violence, we have to invest in grassroots organizations … for years."

For the past year and a half, the BCBF has focused on paying immigration bonds, helping to free nearly 500 people from U.S. Immigration and Customs Enforcement detention. The fund also provides post-relief support, helping with things like housing, food, diapers and other necessities for people facing potential deportations.

The shift to immigration bonds came after the group felt it was becoming "entrenched in a system we actually wanted to dismantle," said Zoe Adel, the BCBF's advocacy and communications manager.

"The conversation stopped being around 'how do we end pretrial incarceration?' and became about ending it partially for certain groups and letting bail funds handle the rest," she said.

Despite the fact that other groups have taken on bail for protesters, the BCBF saw a huge influx of cash in the wake of Floyd's killing. Since May 29, more than 50,000 people have collectively donated more than $1.8 million.

To honor the donor intent, those funds won't be going to immigration bonds; Adel said the BCBF is deploying the money to other groups around the state and around the country that are bailing out protesters. She added that the group is working to re-grant the money to grassroots and Black-led organizations fighting for racial justice.

"Hopefully it's becoming clear to most people that all it takes for someone to be arrested, charged and incarcerated pretrial is for a police officer to say you did something illegal," Adel said. "This is something that Black and brown people have experienced for decades."

Although the Nashville Community Bail Fund did not intentionally fundraise in the days following Floyd's killing, it still received a flurry of donations unlike any other it had seen before: more than $100,000 in a few days, for an organization accustomed to a $50,000 annual budget.

The group's manager, Rahim Buford, said the money has helped the fund pay $40,600 to bail out 15 people, mostly protesters, since Floyd's killing. He hopes the increased donations and attention will help the NCBF grow its volunteer base and launch a court-watching program to observe and document the inequities in how bail amounts are set.

As an example, he noted that a local police officer was assigned a $25,000 bail amount when charged with first-degree murder for shooting a Black man named Daniel Hambrick in July 2018.

"We have protesters being charged $75,000 to be released," he said. "We've been able to negotiate that down, but it goes to show the disparities and who's favored."

For now, Buford, who served 26 years in prison on a murder charge before being released in 2016, is focused on the task at hand: After Black Lives Matter protesters held a demonstration against the city budget Tuesday, he said he was bailing people out of the local jail well past midnight.

"There is an urgency that I feel when it comes to getting people out of a cage," he said. "One hour, or two, or three in a jail cell ... it can traumatize you for life. And of the 1,090-plus people we've freed since 2016, over half of those cases were ultimately not prosecuted. Had they stayed in jail, they would've more than likely pled guilty."

Correction: This story previously misstated the name of the Chicago Community Bond Fund. The error has been corrected.