By Joanne Faulkner
Law360 is providing free access to its coronavirus coverage to make sure all members of the legal community have accurate information in this time of uncertainty and change. Use the form below to sign up for any of our daily newsletters. Signing up for any of our section newsletters will opt you in to the daily Coronavirus briefing.


Law360, London (June 19, 2020, 12:15 PM BST) -- The City regulator asked banks on Friday to give more time to millions of people struggling with loan and credit card debt repayments amid the COVID-19 pandemic. 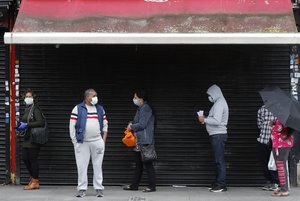 The City regulator has urged bank to allow struggling consumers to freeze payments on accounts such as credit cards and personal loans until the end of October. (AP)

Account-holders should be allowed to freeze payments on credit cards and store cards, catalog credit and personal loans for a further three months — until the end of October. The relief package will also enable more consumers to apply for an interest-free overdraft of up to £500 ($619), the regulator said.

Most banks have been offering payment breaks since they were urged to do so by the FCA in April.

"We have been working closely with other authorities, lenders and debt charities to support consumers in the current emergency," Christopher Woolard, the FCA's interim chief executive, said. "The proposals we've announced today would provide an expected minimum level of financial support for consumers who remain in, or enter, temporary financial difficulty due to coronavirus."

But the FCA stopped short of introducing a cap on overdraft interest rates beyond the £500 buffer. Many lenders were ready to raise interest rates to almost 40% before the pandemic struck.

Instead, the regulator said banks should ensure that customers are "no worse off" than they were before recent changes to overdraft rule changes and said it would continue to monitor pricing of overdrafts.

The FCA stressed that a borrower's credit rating should not be affected if they take advantage of payment deferral. But they should continue to make repayments if they can afford to do so.

The watchdog is seeking comments on the proposals until June 22. It will then issue its final guidance.

The regulator said its relief package would complement measures announced by the government in March, which include lenders supporting customers through so-called mortgage holidays.

Mortgage lenders agreed they will support customers who are experiencing problems with their finances as a result of COVID-19 after Chancellor of the Exchequer Rishi Sunak announced the stopgap measure in an "unprecedented package" of government-backed loans worth £330 billion.