By Michael Phillis
Law360 is providing free access to its coronavirus coverage to make sure all members of the legal community have accurate information in this time of uncertainty and change. Use the form below to sign up for any of our weekly newsletters. Signing up for any of our section newsletters will opt you in to the weekly Coronavirus briefing.


Law360 (June 25, 2020, 9:25 PM EDT) -- State court caseloads dropped sharply when the COVID-19 pandemic hit and governments shut down in April and May, although the types of cases that tend to involve corporations saw smaller decreases, according to Lex Machina data released Thursday.

Lex Machina found that civil case filings across nine court systems during the shutdown in states including California, Texas and Delaware plunged 53% in April and 49% in May from the same periods last year.

But those changes were not uniform. In Texas and California, smaller cases experienced larger drops than ones involving higher dollar figures, which tend to include corporate disputes, the data showed.

But limited jurisdiction case filings decreased significantly, by 63% in April 2020 from the same month the year before. The year-over-year drop in May was 77%, Lex Machina said in a blog post about its findings.


The data showed that a big part of the dip was due to collection cases. There were 7,854 collection cases in April 2019, but just 2,365 in April 2020, Lex Machina said. California took some actions during the pandemic to reduce residents' financial stress. On April 23, for example, Gov. Gavin Newsom signed an executive order preventing COVID-19 financial assistance from being taken by debt collectors.

Sacramento County Superior Court did not allow nonessential cases until May 6, halting new filings for the most part. When courts reopened, however, bigger cases jumped to levels that had not been seen in months while smaller cases in May were still well below levels from the same time the year before, according to the data. E-filing is more limited in Sacramento County courts, Lex Machina noted.

In Texas, Lex Machina looked at filings in certain county and district courts. While jurisdictional boundaries among those courts are not entirely clear cut, there is no limit on the amount in dispute that district courts can handle in civil cases; county-level courts tend to deal with civil actions between $200 and $10,000, according to the state. In Harris County, county court filings dropped 62% year-over-year in May, while district court filings fell 28%.

The lone exception among state courts Lex Machina surveyed was the Delaware Court of Chancery, which saw an increase in cases driven by commercial law filings. 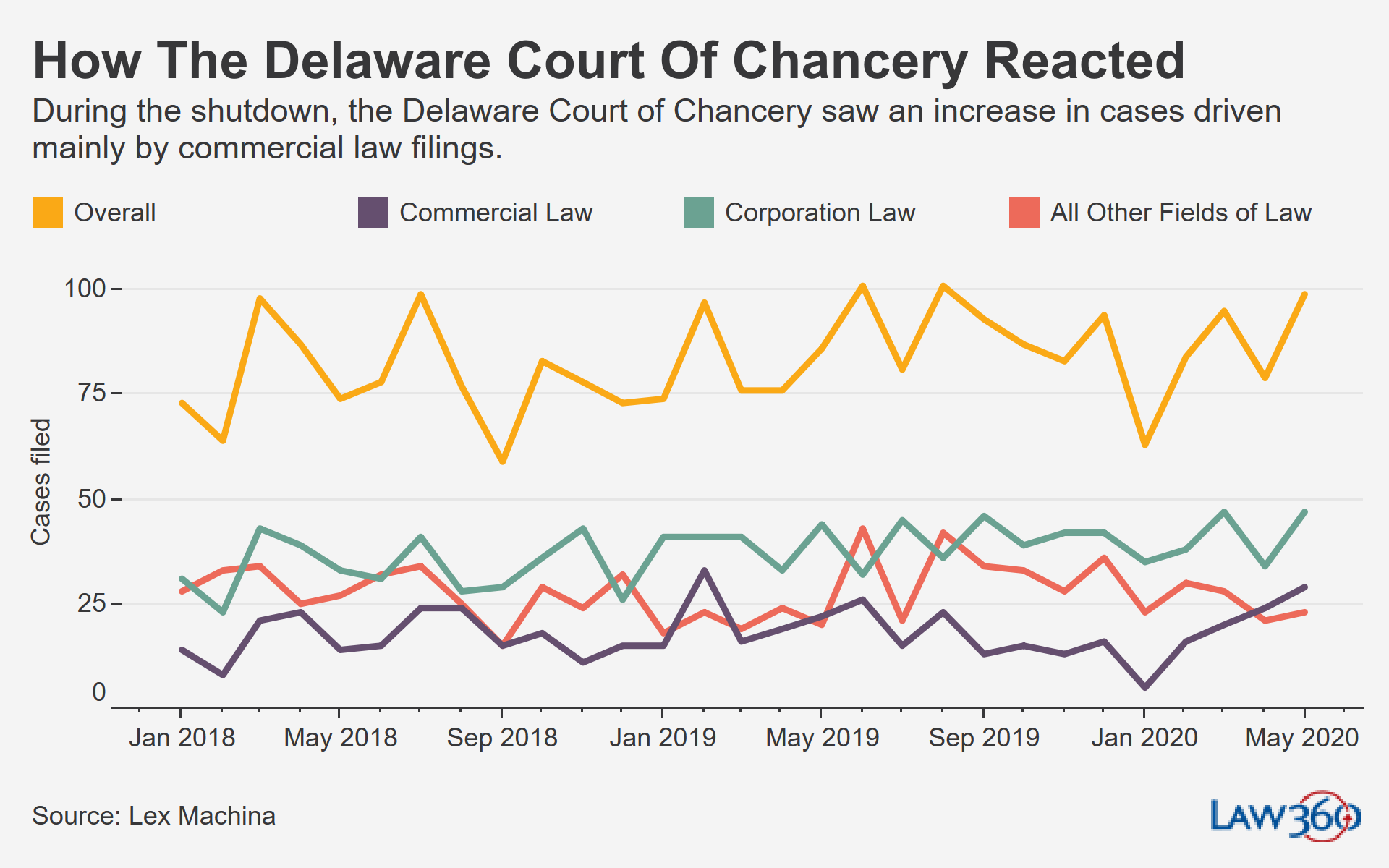 
"There have also been numerous new cases filed requesting the Delaware Court of Chancery to interpret whether COVID-19 qualifies as a Material Adverse Effect, a standard clause in purchase and merger agreements," Lex Machina's blog post said.

According to the data, while case filings for commercial and corporation law went up in the Chancery in May, all other fields of law saw a 24% drop.