Law360 (June 29, 2020, 1:08 PM EDT) -- Both houses of Germany's Parliament voted Monday to approve a temporary reduction in value-added tax, a move the government hopes will entice consumers to make purchases as businesses reopen from forced shutdowns in response to the novel coronavirus pandemic. 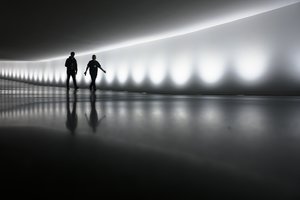 The German Parliament approved cutting the standard VAT rate to 16% from 19% from July 1 until the end of the year. Two people walk through a tunnel between the plenary hall and an office building of the German parliament Bundestag in Berlin in March. (AP)

According to a document on the Parliament's website, the vote in the lower house carried with the support of the governing coalition of Christian Democrats and Social Democrats. The far-right opposition AfD and pro-business FDP parties voted against the measure, while the Left and Green parties abstained. An individual vote tally wasn't readily available.

The upper house of the Parliament, in which each of Germany's 16 federal states has a vote, backed the measure hours later in a special session.

The vote came after the German government announced the measure earlier this month. The law calls for the standard VAT rate to be reduced to 16% from 19% from July 1 until the end of the year. The reduced VAT rate, which includes restaurant meals, would also fall from 7% to 5%. Germany had previously announced in April that it would reduce the VAT rate for restaurant meals.

"The goal of the tax measures is to strengthen purchasing power, which has weakened due to the corona pandemic, and support companies with targeted measures," said the document published on the website of the lower house of Germany's Parliament, the Bundestag.

The law also raises the amount of money companies can claim back on taxes paid last year. In addition, the new tax measures increase the extent to which companies can depreciate investments this year and next year.

At the time of the plan's announcement, some economists praised the initiative to promote consumer spending but said there was a risk that limiting the VAT cut to only six months was insufficient to offset the damage done due to COVID-19.

Germany, like much of the world, shut down much of its economy and instituted restrictions on public events and gatherings to help stop the spread of COVID-19. It has begun reopening its economy.

Other countries have also resorted to VAT cuts to help struggling parts of the economy. This month Austria said that it planned to slash value-added tax for restaurants, cultural establishments and tourism. It also announced last month that it would cut the VAT on nonalcoholic drinks in cafes and restaurants.