By David van den Berg
Law360 is providing free access to its coronavirus coverage to make sure all members of the legal community have accurate information in this time of uncertainty and change. Use the form below to sign up for any of our daily newsletters. Signing up for any of our section newsletters will opt you in to the daily Coronavirus briefing. 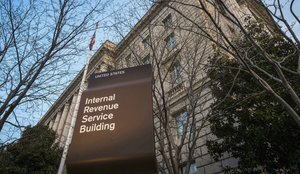 The IRS has said that through July 15, it will suspend some enforcement activities and automatic liens and levies and avoid in-person contact between its agents and taxpayers as much as possible. (AP)

The IRS announced in March that it was curtailing enforcement actions, including audits, as part of a pandemic response that it called the People First Initiative. As part of the program, the agency said it generally would avoid launching new examinations through July 15, though it said it could start audits to protect the government's interest in preserving the applicable statute of limitations.

Generally avoiding launching new examinations was just one part of the People First Initiative. The agency also announced it would suspend some enforcement activities and automatic liens and levies and avoid in-person contact between IRS agents and taxpayers as much as possible through July 15.

"I think they took a very practical, in my opinion, taxpayer-favorable approach by basically suspending all audits," Collins told Law360 on Monday.

It may not be long before the agency launches more new audits. An IRS official said during a recent webcast that the agency plans to ramp up suspended enforcement work in phases after the July 15 return filing and payment deadline.

While suspending new examinations and in-person meetings affected all examination functions, the IRS' closing of its campuses, which conduct about 75% of examinations almost exclusively through ground mail using an automated system, has had and will continue to have the largest impact on open examinations, the report said.

Collins said she expects the IRS' business operating divisions won't all approach decisions about audits the same way, though she hasn't heard about a final decision made by any of them.

"I think you're going to see the decisions made based on the inventory of the particular business unit as to which cases they were going to pull, which ones they plan on pulling, and is there any reason to change their approach based on the suspended cases," she said.

Collins said she expects a provision in the Coronavirus Aid, Relief and Economic Security Act,

or CARES Act, that allows taxpayers to carry back some net operating losses will create a pile of work for the agency's Large Business & International Division. All refunds over $5 million for corporate taxpayers and over $2 million for all others require Joint Committee on Taxation, review and Collins told Law360 she expects that refunds for most companies using the NOL carryback provision in the CARES Act will be subject to that requirement.

"I think post-July 15, LB&I is going to have to make some decisions with respect to all those five-year carryback cases, and how is that going to impact their original examination plan?" she said. "Is it back to business as usual? And all those cases that were suspended, are they going to continue auditing those companies, or are they going to reevaluate their inventory based on everything that's happened for the last three months?"

Monday's report was the first released since Collins started serving in the position in March. It found that despite the agency's best efforts to address the COVID-19 pandemic, taxpayers were still left facing significant challenges, including those in getting help from the IRS. Some taxpayers who filed paper returns will also face delays in getting refunds, the report said.

The increase in uptake in the Free File program could be explained by improvements to the program as well as an increase in the number of taxpayers who submitted returns to get economic impact payments under the CARES Act even though they were under no obligation to file, according to the report.

In a statement about the report, the IRS touted its delivery in record time of millions of economic impact payments in response to the pandemic. "Extraordinary efforts to timely implement relief in the wake of COVID-19," the statement said, came during an unprecedented extended filing season and as the agency continues working to carry out provisions of the 2017 Tax Cuts and Jobs Act