By Emma Cueto & Xiumei Dong
Law360 is providing free access to its coronavirus coverage to make sure all members of the legal community have accurate information in this time of uncertainty and change. Use the form below to sign up for any of our weekly newsletters. Signing up for any of our section newsletters will opt you in to the weekly Coronavirus briefing.


Law360 (July 6, 2020, 10:24 PM EDT) -- More than 170 of the largest law firms in the U.S. were among the businesses approved for loans under a federal program intended to ease the economic impact of COVID-19, with roughly 100 receiving a nod for funding of between $5 million and $10 million, according to newly released data. 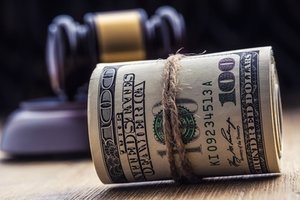 Law firms nationwide are among the businesses that have received government funds under the Paycheck Protection Program, according to newly released data. (iStock.com)

The firms were approved by participating lenders, although the funding is still subject to approval and review by the SBA.

Dozens of law firms were approved for loans ranging from $5 million to $10 million under the Small Business Administration's Paycheck Protection Program.


The Law360 400 measures the largest U.S.-based law firms and international firms with a U.S. component as measured by domestic attorney headcount. With 476 total attorneys, Cole Scott & Kissane PA was among the largest firms on the list to seek PPP funding, securing approval for a loan of between $5 million and $10 million.

The personal injury firm Morgan & Morgan found itself in the Law360 400's top 100 with 547 attorneys, but a Florida corporation with the same address as its Tampa office, Morgan & Morgan, Tampa PA, was also approved for a loan in the topmost bracket. The firm did not immediately return a request for additional information.

Monday's data drop included 660,000 small businesses and nonprofit organizations that received at least $150,000 in funding. However, these made up only about 15% of the nearly 5 million entities that were approved for loans. The administration released the data in the face of transparency demands from lawmakers and at least one Freedom of Information Act lawsuit.

Two law firms told Law360 that the PPP funds helped them to navigate the economic upheaval brought on by the COVID-19 pandemic.

A spokeswoman for Kasowitz Benson Torres LLP told Law360 in an email, "When the pandemic shut down the New York courts and our offices for several months, the PPP funding made available by the Federal government served its purpose because, together with substantial cost-saving measures and greatly reduced partner distributions, it enabled us to preserve the jobs of our hundreds of employees at full salary and benefits without interruption."

Kasowitz was approved for funding in the $5 million to $10 million range, as was Dallas-based Thompson & Knight LLP.

"With COVID-19 deeply affecting many of the industries we serve, including the energy sector, we accessed appropriate resources available under the CARES Act to reduce the impact to the firm," Thompson & Knight said in a statement, referring to the Coronavirus Aid, Relief and Economic Security Act.

"Our primary goal during these uncertain times is to protect our people, continue to provide outstanding service to our clients, and to give back to the communities we serve," the firm added.

Another firm headquartered in Dallas, Munsch Hardt Kopf & Harr PC, said it received less than $5 million through the program. According to the firm, the money has primarily gone toward "employee-related expenses and rent."

"It was our understanding the objective of the PPP loan was to help companies keep employees on the payroll," the firm said. "To date, our firm has avoided any layoffs or furloughs."

Other firms contacted by Law360 on Monday about the PPP funding were mum. Boies Schiller declined to comment, and several other firms did not immediately respond to requests for comment.

Like industries across the globe, the legal world has been hard hit by the coronavirus pandemic, leading to cost-cutting measures like furloughs and layoffs. The legal services sector lost 64,000 jobs in April, according to the U.S. Bureau of Labor Statistics.

"What are my biggest expenses? The answer is salaries, health insurance and rent," said Jay Hack, a senior partner at Manhattan-based law firm Gallet Dreyer & Berkey LLP, which received a PPP loan of between $350,000 and $1 million. "The largest items are exactly the kinds of items that the statute was designed to foster."

Most law firms applied for the money to avoid laying off attorneys and staff, according to Hack.

"It is a lot better to get the government to assist in keeping that person on the job," he said.

As a key part of the $2 trillion COVID-19 pandemic relief bill, the Paycheck Protection Program provided loans of up to $10 million for small businesses, generally defined as firms with 500 employees or less, to help them recover from the government-ordered shutdowns and revenue losses caused by the virus outbreak.

The loans are forgivable as long as they are used primarily to pay employees and for other business operating expenses such as rent and utilities.

Small businesses have another month, until Aug. 8, to apply for the loans, after President Donald Trump on Saturday signed a deadline extension into law.