By Carolina Bolado
Law360 is providing free access to its coronavirus coverage to make sure all members of the legal community have accurate information in this time of uncertainty and change. Use the form below to sign up for any of our weekly newsletters. Signing up for any of our section newsletters will opt you in to the weekly Coronavirus briefing.


Law360 (July 15, 2020, 6:06 PM EDT) -- The biggest question for Miami's Eleventh Judicial Circuit Court's jury trial pilot program was whether a panel could even be seated as the COVID-19 pandemic bore down. The answer turned out to be yes, with a verdict rendered Tuesday in the first jury trial in Florida since March.

Eight jurors — who were physically present in a carefully laid out courtroom — returned a verdict in favor of a homeowner in an insurance dispute Tuesday evening after a one-day trial meant to test how state courts might be able to restart jury proceedings during the pandemic.

The trial, which was nonbinding on the parties, was the first held in the state as part of a pilot program to test the feasibility of using technology to help conduct jury trials while traditional jury trials are halted. And it happened on a day when Miami-Dade County reported more than 2,400 new coronavirus cases and local hospitals were operating at capacity because of an influx of COVID-19 patients. 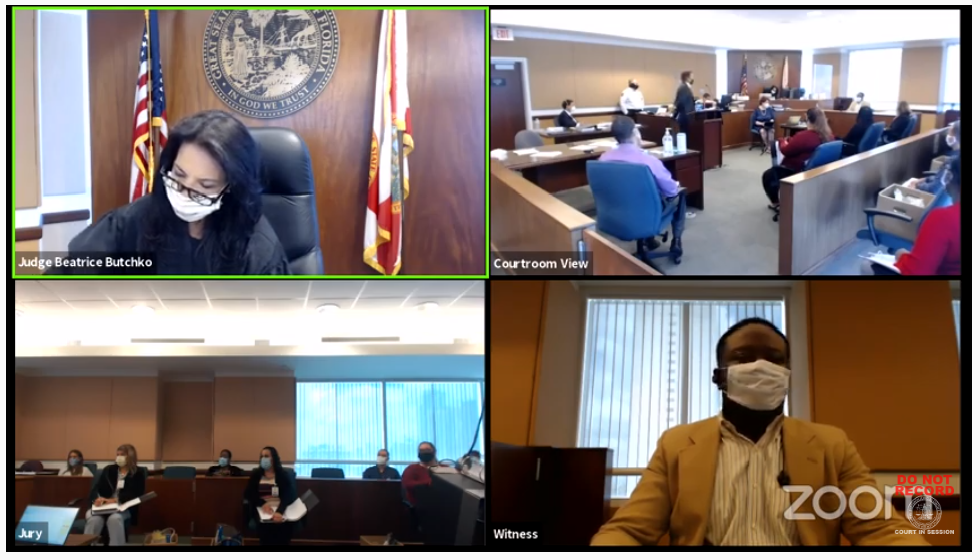 Construction project manager Alex Herard testifies behind plexiglass in Florida's first jury trial since the start of the pandemic.


"The amazing thing about this is that not only did we get a jury, but we got a jury in the face of a complete onslaught of daily news about COVID surging in Miami," said Judge Jennifer D. Bailey, the administrative judge for the Eleventh Circuit.

When Judge Bailey and Chief Judge Bertila Soto started planning the trial, Miami-Dade County was in Phase 2 of its pandemic plan, with coronavirus cases holding steady and businesses beginning to reopen. But in recent weeks, cases have climbed and the county has become one of the new hot spots of the disease in the U.S.

Despite this, Judge Soto said the jury selection process, which was conducted on Zoom with the prospective jurors at home, was "astonishingly normal."

"I was really moved. I had tears in my eyes when I saw people were willing to sit as jurors in this case," she said. "It gives me hope that people believe that the system of justice is important, that they want access to the courts. It really blew me away to hear the jurors."

The parties' day in court Tuesday was a carefully choreographed operation that was conceived after numerous discussions with medical experts, according to the judges. Jurors were assigned parking spots outside the courthouse and escorted to the courtroom by bailiffs. Everyone upon entry into the building had to answer questions about COVID-19 symptoms and undergo a temperature check. Inside the courtroom, jurors were spaced at least 6 feet apart, with a few sitting in front of the jury box.

Masks had to be worn at all times, and jurors were also given face shields and instructed to wear them when moving from one place to another. Witnesses testified from behind plexiglass. Admission into the courtroom was strictly limited, so the proceedings were streamed live on the court's YouTube channel.

To make it all work, the court administrators had to take over three additional courtrooms to give jurors and attorneys space to take breaks and to eat lunch while still practicing social distancing.

Cole Scott & Kissane PA partner Brandon Waas, who represents defendant People's Trust Insurance Co., said he, like Judge Soto, was surprised at just how many people were willing to show up and serve as jurors. But the process of selecting a jury via Zoom was not as effective as the traditional in-person proceeding, he said.

"The one thing that stuck out to me the most is how little you could tell about someone by seeing their face in a box as opposed to seeing them in person," Waas said. "I think you lose quite a bit."

Waas said he thinks the arrangement could work for similar types of cases that are not too complicated, but that there were "way too many pitfalls" for him to recommend it to a client for a big case.

"Do I see a lot of clients agreeing to this? I'm not really sure," Waas said. "Most defendants who are insured are perfectly fine just sitting on it if they have a defensible case they want to take to trial. Plaintiffs' counsel are probably much more anxious."

The case, a typical Florida dispute over insurance coverage of damage to a homeowner's property from Hurricane Irma, was chosen for the pilot jury trial specifically because it was streamlined and uncomplicated, according to the judges. The Miami chapter of the American Board of Trial Advocates had put out a request to members asking if anyone had a case such as a property insurance dispute that would take one or two days to try, according to George Hooker, a partner at Cole Scott who also represents People's Trust.

When he reached out to his client, he says the insurer was excited to help the judiciary with the test trial.

"Ultimately, this was likely a case that both sides would have resolved without the need for a trial," Hooker said. "I think both sides would likely have found a reasonable resolution anyway, but we wanted to do our part to try to restart civil trials if possible."

Andrew Vargas of Vargas Gonzalez Hevia Baldwin LLP, who represents homeowner Yusem Corchero, said that although his team also had some difficulty reading people during jury selection on Zoom, he thinks it's a good alternative for similar breach-of-contract cases that would take a day or two to try.

"We need to keep on doing it for these cases," Vargas said. "Would I recommend it to my client? Yes I would, as opposed to them waiting another year or six months to get their day in court."

Judge Bailey said one of the biggest challenges is that the courthouse does not lend itself to social distancing.

"The biggest courtroom we have can hold just 39 people with social distancing," she said. "You're not going to see a typical trial configuration until there's a vaccine."

The other challenge will be restarting jury trials in criminal cases, which Judge Soto said is a "totally different ballgame." So far, Florida Chief Justice Charles Canady has not authorized remote proceedings like a Zoom jury selection for criminal cases, so any jury trial in the criminal division would involve bringing an entire jury pool to the courthouse.

"It is going to be a challenge to get a criminal case live, but we have to do it because there are people in custody, and they deserve to go to trial if they wish to," Judge Soto said.

In the long term, the judges said the innovations forced by the pandemic should help improve efficiency in the court, at least on the civil side. Jury trials and complicated hearings will still need to be done in person once the coronavirus is no longer a daily concern, but certain functions of the court — like the five-minute motion calendars in civil court — have translated well to the Zoom format and could continue to be done that way post-pandemic.

"We do traffic court remotely now, and people are doing their tickets remotely," Judge Soto said. "That should stay forever."