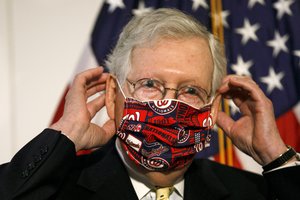 The American Workers, Families and Employers Assistance Act, unveiled by Senate Finance Chairman Chuck Grassley, R-Iowa, is one of a series of bills Republicans released in their latest response to the pandemic.

"This unprecedented expansion of federal assistance will help millions of workers, families, patients, businesses and governments survive this historic public health and economic crisis," Grassley said on the Senate floor. "This legislation serves as a starting point for bipartisan negotiations. I urge my colleagues on both sides of the aisle to not let partisan differences derail progress."

The legislation would continue and expand the economic impact payments from the Coronavirus Aid, Relief and Economic Security Act

, or CARES Act, a $2 trillion emergency spending bill signed by President Donald Trump in March. Republicans proposed giving the $1,200 payments to individual taxpayers, and $2,400 payments to married taxpayers, at the same income levels in the CARES Act. However, a bonus $500 payment would be extended to all dependents, regardless of age, including disabled adults.

The legislation also includes an enhanced employee hiring and retention payroll tax credit that expands eligibility and coordinates the credit with the Paycheck Protection Program of business loans and grants. The bill also temporarily expands the work opportunity tax credit to workers who lost their jobs due to the pandemic.

The bill would provide a tax credit to cover virus-related expenses for employers who reconfigure workplaces to make them safer for employees. It would also allow tax-free withdrawals from money purchase pension plans and clarify the use of net operating losses by farmers.

In a Senate floor speech unveiling the proposals, McConnell said the next step would be bipartisan talks with Democrats.

"I know our Democratic colleagues know this crisis is still urgent. I know they know American families need more help," McConnell said. "So I hope this strong proposal will occasion a real response."

Senate Democrats reacted unfavorably to the legislation, which they expect to negotiate closer to a $3 trillion House-passed bill that provides more generous relief for individuals and businesses while also rolling back provisions of the 2017 landmark tax overhaul.

"This is totally, completely irresponsible. It is cruel. It is legislative malpractice," said the Senate Finance Committee's ranking member, Ron Wyden, D-Ore.

Wyden chided Republicans as not engaging with Democrats to pass legislation until right before the coming congressional August recess.

"Bottom line, it's long past time for my Republican colleagues to get serious about working with Democrats on a proposal that has a pathway to becoming law," he said. "This Republican plan does not. It's a plan to throw gas on a fire and then cut the fire hoses."

The Senate GOP plan has little in common with the House-passed Health and Economic Recovery Omnibus Emergency Solutions Act, which includes several long-standing Democratic priorities, such as temporarily repealing the federal cap on state and local tax deductions for 2020 and 2021. It would also expand the earned income tax credit to workers without children and increase the maximum amount of the credit to $1,487 this year.