Law360, New York (July 28, 2020, 11:40 PM EDT) -- A tall, bearded federal inmate sobbed loudly in front of New York City's first live jury amid the COVID-19 pandemic as he spoke of his friend's gruesome death — the witness's features obscured by a shiny face shield, a blue mask dangling from his left ear and a wall of plexiglass. 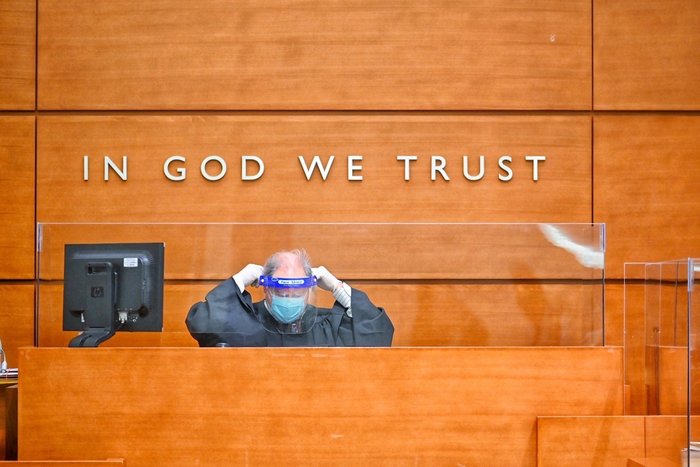 On Tuesday, New York state trial judge Justice Steven Barrett adjusts his face shield as he prepares to preside over New York City's first jury trial since the start of the pandemic in a Bronx courtroom retrofitted with plexiglass and microphones. (nycourts.gov)

"Was the jury able to see his face?" defense counsel Javier Solano wondered aloud later that day. Solano suspects the witness "fake cried" on the stand. From the gallery, it was impossible to tell.

The Bronx cold case murder trial on Tuesday featured a masked judge, jurors, attorneys and spectators, all wrestling with an array of challenges caused by the panoply of precautions rolled out to help jumpstart jury trials stalled since March after the state court system largely shut down in-person proceedings. Another obstacle emerged as well: several jurors asked to be excused.

New York Supreme Court Justice Steven Barrett presided over the trial in which Edickson Geraldo is accused of killing a man in the 1989 shotgun shooting related to a crack cocaine turf war, based on the testimony of one man serving a 75-year federal sentence for a series of armed bank robberies and his cousin, who is serving a 24-year sentence on drug charges.

With key casefile documents lost over the years, the 30-year-old murder case largely hinges on whether the jury believes the testimony of those two men, Solano said.

"This is a 100% credibility case," Solano said, arguing that jurors often note the importance of seeing people's faces at trial in weighing their testimony. "How do you know if someone is lying?"

"You don't realize how much of listening to somebody is watching their mouth move," Solano said.

The witness on Tuesday was the man serving the 75-year sentence, Gary Ramsey, 50, who claimed to have known Geraldo when they were teenagers and they were allegedly both selling drugs on the same streets in the Bronx during the late 1980s. Before Ramsey took the stand, Solano worried about the logistics of how the witness might identify his client as the perpetrator of the crime.

As it turned out, the judge called Solano up to the bench while the witness was on the stand, leaving little doubt about which of the two men at the defense table Geraldo was. "Well, clearly I'm not the defendant," Solano later said, disappointed. The witness easily identified his client.

Justice Barrett himself was decked out in white latex gloves, a blue face mask, spectacles and a plastic face shield as he sat behind the plexiglass dividers mounted to the bench.

Despite the installation of microphones in the specially equipped double-jury courtroom, the judge's muffled voice was often reduced to incoherent tones, like the teacher portrayed in the Peanuts comic strip. Attorneys struggled at times to hear him, often asking him to repeat himself.

"Good morning and welcome back after these many months," the judge said, acknowledging the "delay of the COVID pandemic" as he was addressing the attorneys who sat behind their own plexiglass walls at their tables, sporting masks and face shields.

The judge ultimately opted to remove his mask but keep the shield when he addressed the jury.

A half-hour later, 12 masked jurors entered, each spaced two chairs apart over three rows in the box, followed by three alternates in chairs in the rear of the well. The judge noted that he had replaced one juror after the man told the court he was stuck in Pennsylvania. An alternate took his place.

"We're now going to resume the trial that started on March 4," the judge said.

Geraldo looked on in a blue shirt and mask, his family members seated together in the gallery behind him. He has been locked up during the pandemic, waiting for his trial to resume since his arrest in May 2019 on suspicion of second-degree murder. The trial had been suspended since March 4 due to the coronavirus, after a single day of opening statements and testimony from a medical examiner and a cold case detective, the prosecutor told Law360.

"The dangers posed by the disease are still present," Justice Barrett said, noting all the precautions the court had taken and that the courthouse "has never been this sanitary."

Bronx County Hall Of Justice was cold and quiet on Tuesday, with court officers easily outnumbering anyone else in the lobby. Visitors were scanned at the doorway, where a video display of their face alerted them to their temperature — below 100° will gain a visitor entry if they also pass a battery of questions about virus tests, symptoms, virus exposure and travel.

There was hushed concern at lunchtime when attorneys and court officers told Law360 that a juror said she was nauseous and throwing up — a CDC-designated symptom of COVID-19.

At the same time, court officers allowed attorneys into the courtroom at 2:30 p.m., but barred the press from entering for 30 minutes and declined repeated requests for an explanation for why the courtroom was locked to the public.

A state courts spokesman did not respond to a request for comment on why the courtroom was locked on Tuesday.

After the courtroom was unlocked, the judge dismissed the witness for the day in the midst of cross examination and called the sick juror into the courtroom. The woman confirmed the reports of her symptoms, but quickly asked to speak privately with the judge. After several minutes of muffled whispers and raised eyebrows from attorneys on both sides at the bench, the juror was excused for the day and told to return for duty the next day.

"She is confident that she can come in tomorrow," Assistant District Attorney Eric Hirsch told an attorney for the witness after returning to the prosecutors' table.

The judge later explained to the remaining jurors that "after a full inquiry" the illness was not "COVID related" and was merely a "temporary stomach ailment."

A state courts spokesman did not answer questions about what that inquiry involved, whether a doctor was consulted or if the juror was tested for COVID-19. "Her symptoms have nothing to do with the pandemic," said Lucian Chalfen. "She explained her situation to the judge, he was satisfied and she will take her seat tomorrow."

At some point earlier in the day, two other jurors told the judge they wished to be dismissed from the case as well. One of those jurors, an older man with white hair, entered the courtroom alongside his fellow jurors but turned to the judge and repeatedly pointed to himself and the judge as he made his way to his seat.

Still, the judge refused to hear those jurors' concerns and said he would make time to speak with them sometime in the next day or two, as trial continued with the two remaining witnesses. Closing statements will be on Friday or next Monday, the judge told the masked jurors.

"We want to desperately finish this case," Justice Barrett said, before reminding jurors of their responsibilities. "Trials always have little wrinkles," he added.

The murder trial will resume at 10 a.m. Wednesday, the judge said, before dismissing the remaining jurors for the day.

The government is represented by Eric Hirsch of the Bronx District Attorney's Office.

Geraldo is represented by Javier Solano.