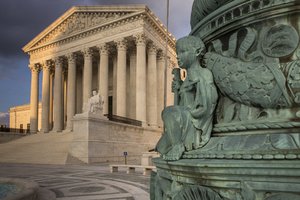 In a 4-2 order, with three justices not listing how they voted, the nation's highest court granted Republican Gov. Brad Little and Secretary of State Lawerence Denney's emergency application for a stay of a federal judge's order allowing Reclaim Idaho extra time to gather signatures for the initiative. The stay is valid through a ruling at the Ninth Circuit, which will hold a hearing on the case's merits on Aug. 13, and a potential writ of certiorari to the justices.

Chief Justice John Roberts wrote in a concurring opinion that the justices would likely agree to hear the case and that there was a "fair prospect" that they would overturn U.S. District Judge B. Lynn Winmill's order. Judge Winmill allowed the campaign 48 extra days to gather signatures, and to gather them electronically, saying the state had violated Reclaim Idaho's First Amendment rights by not providing the campaign with a safe method for gathering signatures during the state's stay-at-home order amid the pandemic.

"Even assuming that the state laws at issue implicate the First Amendment, such reasonable, nondiscretionary restrictions are almost certainly justified by the important regulatory interests in combating fraud and ensuring that ballots are not cluttered with initiatives that have not demonstrated sufficient grass-roots support," Justice Roberts wrote.

He was joined by Justices Samuel Alito, Neil Gorsuch and Brett Kavanaugh.

The order puts a halt to Reclaim Idaho's signature-gathering efforts for the Invest in Idaho initiative, as the state's April 30 deadline to gather signature petitions will be reinstated. The campaign said in a statement Wednesday it was still about 22,000 signatures shy of the 55,057 needed to qualify the measure for the Nov. 3 ballot.

The initiative would ask voters to raise the state's top income tax rate to 9.925% from 6.925% on individuals, trusts and estates with taxable income of $250,000 or more, or $500,000 for married couples, and raise the corporate income tax rate to 8% from 6.925%. If approved, the higher tax rates are expected to raise $170 million annually, which would be earmarked for education.

In urging the justices to deny the stay last week, Reclaim Idaho said that pausing the signature drive at this point in the election cycle would leave the initiative "dead in the water." But Justice Roberts said that the measure's potential failure to qualify for the ballot would be due in part to Reclaim Idaho's not initiating its lawsuit until more than one month after the state's signature deadline had passed.

In dissent, Justice Sonia Sotomayor, joined by Justice Ruth Bader Ginsburg, said the stay harms the campaign more than allowing the dispute to continue in the lower courts would harm Idaho.

Idaho officials could simply remove the initiative from the Nov. 3 ballot if Judge Winmill's order were reversed, whereas by denying Reclaim Idaho more chances to gather signatures, "it will be extremely difficult, if not impossible, for them to collect enough qualifying signatures by any reasonable deadline for the November ballot," Justice Sotomayor wrote.

Justice Sotomayor also chastised the majority's decision to leapfrog the Ninth Circuit's forthcoming ruling in the case, saying that "undermines the public's expectation that its highest court will act only after considered deliberation."

Little and Denney had argued that county officials would face considerable burdens verifying electronic signatures, which the state does not allow for initiative petitions, and that Judge Winmill's order would force state and local officials to navigate a compressed timeline to administer the question for the ballot.

In a statement, Little praised the justice's decision to pause Judge Winmill's order.

"I am pleased that the Supreme Court upheld Idaho's sovereignty over its election and initiative processes," Little said. "It is important that initiatives follow the laws set by the Idaho Legislature so we can ensure those initiatives that get on the ballot are legitimate and have significant support throughout Idaho."

Luke Mayville, co-founder of Reclaim Idaho, told Law360 that the campaign was dismayed at the justices' decision to act in the case at this juncture.

"We are shocked that the Supreme Court has taken extraordinary action to intervene in the normal judicial procedure," Mayville said.

Nevertheless, he said the campaign has not lost hope yet that the initiative may still qualify for the Nov. 3 ballot.

"The path ahead is uncertain," Mayville said. "But regardless of whether those in power continue to block our efforts, we at Reclaim Idaho are going to keep working for adequately funded schools."

The order did not list how Justices Stephen Breyer, Elena Kagan and Clarence Thomas voted on the stay.

Little and Denney are represented by Attorney General Lawrence G. Wasden and by Robert A. Berry, Brian Kane, Steven L. Olsen and Megan A. Larrondo of the Idaho Attorney General's Office.