Women Gain In GC Roles, But Still Get Paid Less Than Men

By Lauren Berg
Law360 is providing free access to its coronavirus coverage to make sure all members of the legal community have accurate information in this time of uncertainty and change. Use the form below to sign up for any of our weekly newsletters. Signing up for any of our section newsletters will opt you in to the weekly Coronavirus briefing.

Last year, 56 women and 113 men held the role of general counsel at 500 of the biggest revenue-earning companies in the U.S., with the median compensation for men reaching $2.8 million and the median pay for women reaching $2.5 million, according to a General Counsel Pay Trends report from legal recruiting firm BarkerGilmore and data company Equilar that examined U.S. Securities and Exchange Commission filings. The remaining companies in the Equilar 500 did not report general counsel compensation in their filings. 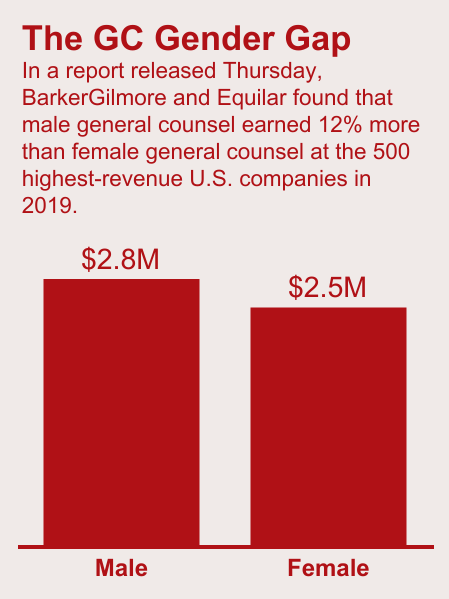 Women did outearn men in stock awards, however, with a median value of $13,000 higher than men in the role of general counsel, according to the report.

In general, at the top of the heap, the report found that at companies with revenues of more than $20 billion, median general counsel compensation reached $4.6 million last year, a 2.6% increase from 2018.

Typically, the more senior and tenured an executive is at a particular company, the more money that person makes, but the report found that in the case of general counsel, that's not necessarily true. Among the Equilar 500 general counsel, looking at five-year ranges, median compensation peaked among those who have been at their companies for less than five years, at $2.9 million, according to the report.

"Interestingly, median compensation was lowest for general counsel that have been at their companies for 20 or more years," the report said. "The general counsel appears to be an executive position in which remaining at a company long-term limits earning potential."

But the study also showed that the average general counsel earns more money as time passes since they earned their law degree.

John Gilmore, the co-founder and managing partner of BarkerGilmore, said in the report that since the beginning of the coronavirus pandemic, general counsel and their departments have risen to the challenge, despite many having to lay off lawyers to help companies shoulder the economic fallout. He said general counsel are relied upon more than ever by company executives for strategic insights and leadership skills.

During the pandemic, general counsel should be focused on the safety of employees and customers by putting plans in place to prevent the spread of the virus and what to do when someone tests positive, Gilmore said. They also have the daunting task of keeping business operations going, he said, while making sure the company is in compliance with state regulations.

Gilmore said general counsel rarely make compensation a priority and are more interested in tackling challenges at their companies and being effective leaders.

"General counsel remain optimistic about businesses bouncing back in a meaningful way, and the silver lining will be greater equality for all, more efficient and cost-effective operations, and consequently, greater shareholder value," he said in the report.