Law360 (August 31, 2020, 8:48 PM EDT) -- The American Bar Association's fiscal year ended Monday, and while the organization's final results are not yet available, a report on the first three quarters of the year points to some harsh realities for the organization as it faces the impacts of the coronavirus pandemic.

The ABA was operating $6.3 million in the red in May, three months before the conclusion of the 2020 fiscal year, according to Michelle Behnke, the ABA treasurer whose term ended in August.

Behnke told the association's House of Delegates in an early August report that the ABA needs to find a way to escape the "expense reduction treadmill" — attempting to make up for revenue declines with steeper and steeper budget cuts — and instead look for ways to boost revenue. 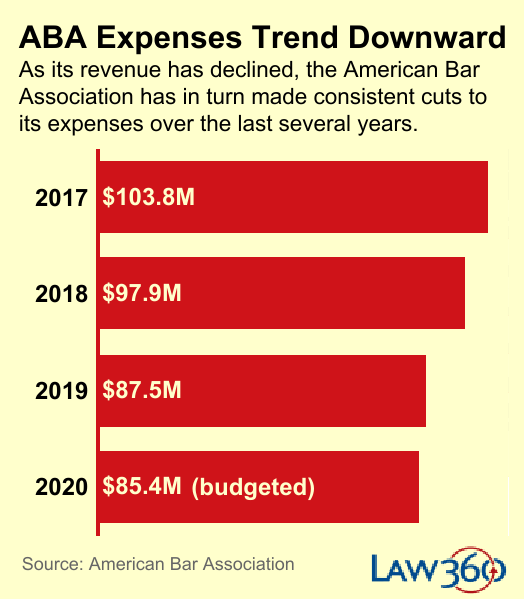 "Growing revenue, especially in the non-dues revenue category, will be important. Growing revenue is the only way we can get off of the expense reduction treadmill we've been on thus far," Behnke told the House of Delegates in a report Aug. 4.

The association's fiscal year ended Monday, but the full-year results will not be available for some time. In her report, Behnke discussed the ABA's financial results fiscal year-to-date as of May.

Behnke's three-year tenure as treasurer ended following her report on Aug. 4, and she was replaced by Baltimore lawyer Kevin L. Shepherd.

Looking at the results as of May, the fiscal year was turning out to be a rough one for the ABA, even before the full brunt of the coronavirus pandemic had been felt.

Despite budgeting for $165 million in general operating revenue during the nine-month period between September and May, the organization pulled in just $135.4 million, Behnke said.

"The shortfall in revenue is not a new story. The shortfall in general operations is a result of lower dues, meeting fees and lower advertising and contributions, as well as royalties," she said.

At the same time, expenses were down significantly, $24 million below budget. Despite these efforts, expenses exceeded revenue for the period by $6.3 million, she said. 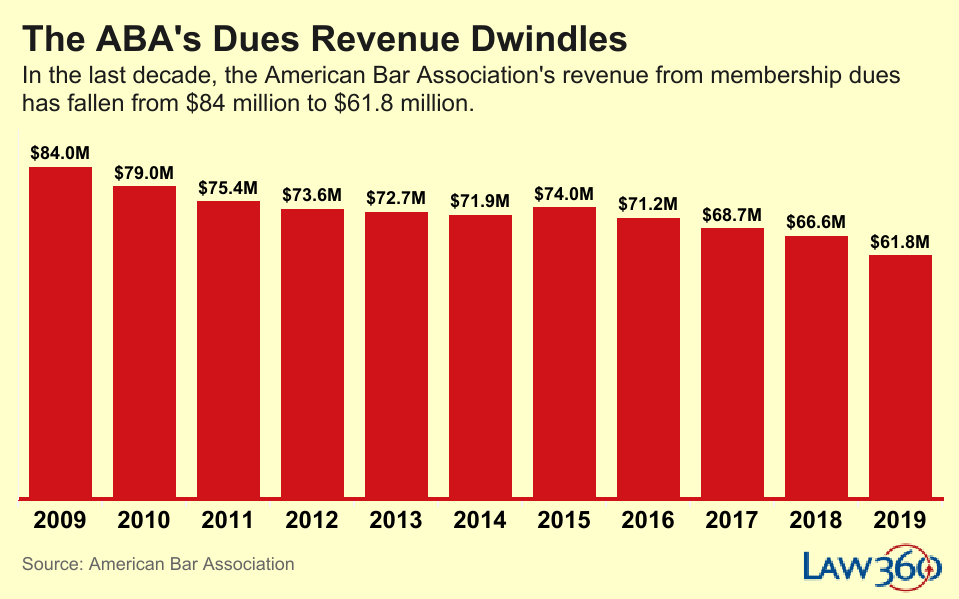 During the last three years that she served as treasurer, the ABA's general operations expenses have been reduced significantly, a good deal of which has come through reductions in staff, Behnke said.

In recent years, the organization has conducted layoffs, instituted a reorganization, implemented a voluntary buyout program, and shifted staff from general operations into other areas, such as grants and sections. Overall, the association has 962 total staff members today, which is more than it did in 2017.

"Given that people and space are a large part of our budget, any further reductions in general operations necessarily means we have to examine both what we do, where we do it, and how we do it," she said.

In 2019, the ABA implemented a new membership pricing scheme with some lower price options, aimed at attracting more members to the organization.

"This program, along with a tightening in expenses, has the association on the right track," executive director Jack Rives told Law360 in a statement Monday.

After years of declines in dues-paying members, in 2020 the organization has added 26,000 new people to those ranks, he said.

"We understand that we cannot reverse years of past trends and practices in a single year and it takes time to educate the market and for the market to become aware of our new value proposition," Rives said of the new pricing model. "We remain focused and committed to making additional improvements, adapt to the circumstances we cannot control, and continue to deliver the value and good works that the ABA provides."

Clarification: This story has been updated to include more information about the ABA's staffing changes.