By Emma Cueto
Law360 is providing free access to its coronavirus coverage to make sure all members of the legal community have accurate information in this time of uncertainty and change. Use the form below to sign up for any of our weekly newsletters. Signing up for any of our section newsletters will opt you in to the weekly Coronavirus briefing.


Law360 (September 4, 2020, 3:54 PM EDT) -- As COVID-19 cases began spiking on the Navajo Nation, located primarily in Arizona, an associate at Stinson LLP's Phoenix office used his connection to the reservation to coordinate a relief effort to send personal protective equipment to first responders and others at risk in the community.

Javier Torres, who is licensed to practice law on the reservation and whose wife, Ginger Sykes, is Navajo, said that as soon as his family members heard about the supply shortages, they felt compelled to help.

What started as Sykes and her mother sewing as many masks as they could from material they normally use to make powwow regalia quickly morphed into a team of volunteers sending vans loaded up not only with masks, but hand sanitizer, bleach, gloves and other supplies that were hard to find on the reservation, creating a "PPE Pantry," he said.

"We were a small group, but we wanted to do what we could," he said. "It's been a really huge effort that's all come together." 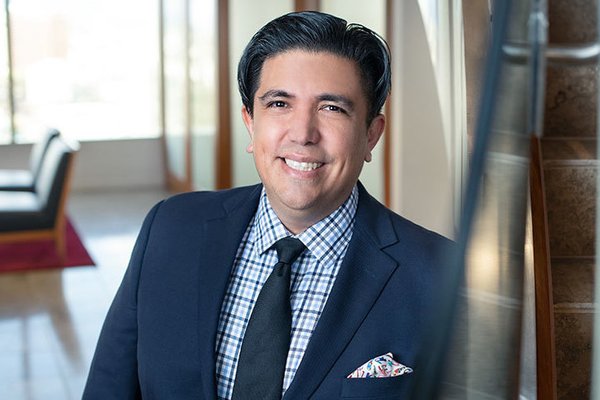 The Navajo Nation, which is home to about 170,000 people, according to 2010 census data, was hit hard and early by COVID-19, reporting an average of over 100 cases per day on the reservation during the first week of May. Although the number of new cases has dropped in recent weeks — down to about 10 per day in the last week of August — there have been 9,800 cases and over 500 deaths on the reservation, according to the Navajo Department of Health.

Trying to combat the pandemic in the Navajo Nation has been a challenge. The reservation is large — over 17 million acres — and much of its population is remote. Many people live in multigenerational households, and about 30% of residents don't have running water, which makes regular hand-washing and sanitizing more difficult.

Torres said he and Sykes were shocked when they saw on Facebook that the hospital in Tuba City, the largest city on the reservation, was asking for donations of homemade masks.

"We were like, 'Why is a hospital resorting to posting on Facebook for strangers to send homemade face masks?'" he said. "My wife and her mother basically turned our house into a mask factory."

Donors and volunteers have provided a steady stream of homemade masks for the PPE Pantry.

A friend of a friend named Marie Nez-Gamble agreed to deliver the masks from Phoenix to the hospital. After a few deliveries, she asked if Torres and Sykes were able to buy bleach in the city; on the reservation, she told them, EMTs weren't able to find it and therefore couldn't sanitize their ambulances.

In response, Torres and Sykes expanded their efforts to bleach and additional supplies, teaming up with others in Phoenix. The Phoenix volunteers coordinated with Nez-Gamble, who lives in Tuba City and works as a vocational rehabilitation counselor, to get the supplies to the Navajo Nation and into the hands of people who needed them.

"It was a lot faster than trying to [go through the nation]," Nez-Gamble said. "Overnight, we were able to get supplies shipped to Tuba City."

The nation, she said, has an established process for filling those requests, such as getting three quotes for supplies before purchasing. But with partners in Phoenix and funds raised through GoFundMe donations, the group was able to work without bureaucracy to source hard-to-find supplies and establish a PPE pantry where first responders could pick up items and supplies could be distributed. 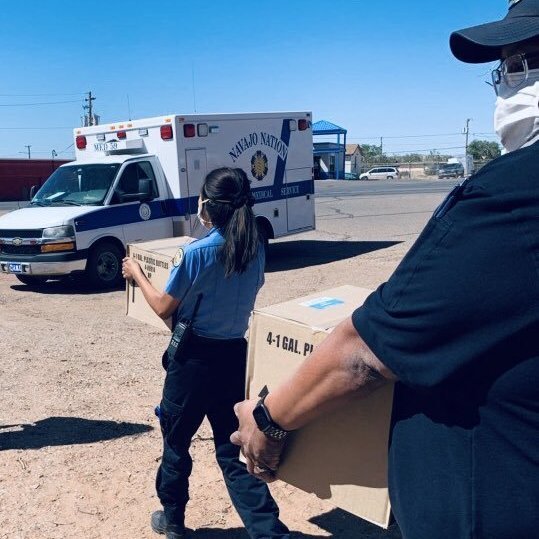 First responders are able to pick up supplies such as gloves, masks and sanitizer from the PPE Pantry in Tuba City.

"As we get money in, we basically spend it as soon as we can," Torres said.

In addition to taking in over $60,000 in cash donations, the group also accepted donations of supplies, from homemade masks to fabric to 5,000 N95 masks Torres says came from a fellow Stanford alumnus.

He and Sykes said it was important to them to get supplies directly into the hands of people who needed them.

"The thing about us is that many of us on the team are Navajo, and we have friends and family who live in these communities," Sykes said. "We didn't have to go through organizations to find the need. … It is really supplying the people."

Nez-Gamble, who coordinated the effort to share supplies, said that having the pantry really helped efforts on the ground. First responders, such as EMTs, knew they could come by the pantry to get bleach or hand sanitizer when they were running low, she said. Volunteers also contacted facilities such as nursing homes to set up deliveries across the vast reservation.

"It is challenging," she said. "We wound up contacting facilities, making arrangements to meet halfway. If I know someone who is traveling to another area, I'll make arrangements to ... meet up somewhere to pick up items to be distributed."

The effects of the pandemic on the reservation were deeply felt, she said, and volunteers wanted to do whatever they could to protect the community.

"It was devastating," she said. "[We worked to] reach out, especially to rural areas, educating elders, getting the message to them how serious this pandemic is and giving them supplies. … At one point, we were giving out face masks just wherever we stopped."

As the infection rate has dropped, the flow of supplies has also slowed, from two shipments a week at the height to only one every week or two, since the pantry now stays stocked longer, according to Torres.

However, Nez-Gamble said, people on the reservation are staying vigilant and aren't assuming the infection rate will continue to decrease.

"They say it has [turned a corner]," she said, "but we're not letting our guard down. … Whatever [supplies] we can get our hands on, there is still a need."