With Romney On Board, GOP Eyes Pre-Election Confirmation

Law360 (September 22, 2020, 10:48 AM EDT) -- Sen. Mitt Romney of Utah — one of the few Republican senators whose support was in question — said Tuesday he would vote to confirm a U.S. Supreme Court nominee this year, virtually assuring the GOP will be able to seat a new justice, likely before Election Day.

Democrats and others opposed to a quick confirmation had pinned their hopes on Romney. The 2012 Republican presidential nominee bucked his party in President Donald Trump's impeachment trial, standing as the only GOP senator voting to remove Trump from office in February. 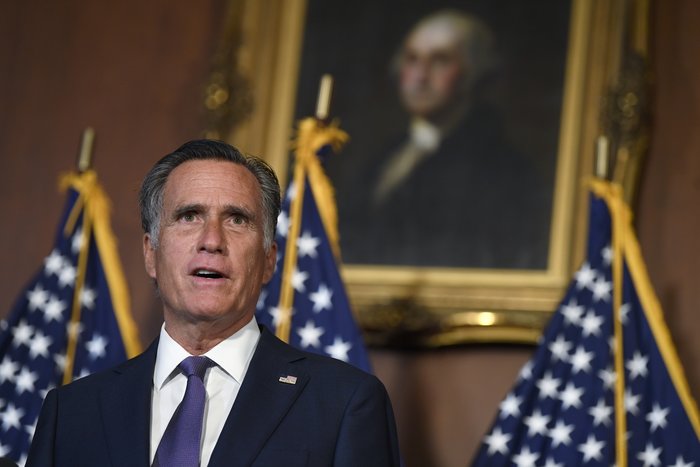 Sen. Mitt Romney of Utah was one of the few Republicans whose support for confirming a Supreme Court nominee this year was in question after breaking with the party and voting to remove President Donald Trump from office in February. (AP Photo/Susan Walsh)

Romney sided with his party Tuesday, minutes after Trump tweeted that he would announce his pick Saturday.

"If the nominee reaches the Senate floor, I intend to vote based upon their qualifications," Romney said in a statement. "My decision ... is based on the immutable fairness of following the law, which in this case is the Constitution and precedent. The historical precedent of election year nominations is that the Senate generally does not confirm an opposing party's nominee but does confirm a nominee of its own."

He also welcomed the chance to cement a conservative Supreme Court majority.

"It's also appropriate for a nation which is, if you will, center-right to have a court which reflects center-right points of view," he told reporters.

Other Republicans who had not yet taken a position, Sen. Dan Sullivan of Alaska and retiring Sen. Mike Enzi of Wyoming, also backed a quick confirmation Tuesday.

Divided government in 2016 meant it was not clear "what the American [people] wanted for the direction of the Supreme Court," Grassley tweeted. "There's no ambiguity now [with a] Republican Senate [and] president."

This leaves only two of 53 Senate Republicans opposed to a pre-election confirmation — Sens. Lisa Murkowski of Alaska and Susan Collins of Maine. Collins clarified her position Tuesday.

"I did not think there should be a vote prior to the election, and if there is one, I would oppose the nominee," Collins said. "We're simply too close to the election. ... We need to play by the same set of rules" as in 2016.

A third GOP defection would force Vice President Mike Pence to break the tie, a first for a Supreme Court appointment. A fourth defection could block a replacement for the late Justice Ruth Bader Ginsburg.

But Republicans appear to have 51 votes if they like Trump's nominee. A leading contender, Seventh Circuit Judge Amy Coney Barrett, visited the White House both Monday and Tuesday, according to CNN.

Republican leaders want a vote as soon as possible, with the Judiciary Committee chairman predicting a new justice by Nov. 3.

"We've got the votes to confirm the judge — the justice — on the floor of the Senate before the election, and that's what's coming," Sen. Lindsey Graham, R-S.C., told Fox News late Monday.

But the chamber's second-ranking Republican, Majority Whip John Thune of South Dakota, told reporters Tuesday that while "there would be sufficient time" to vote before Election Day, "there are different points of view about that" in the Republican conference.

If the president announces his pick Saturday, there would be 38 days until Nov. 3.

That would break with 70 years of precedent. No one has been confirmed to the high court without a public confirmation hearing since 1949, according to CRS. Three-quarters of nominees had four or more days of hearings over the last half-century.

Graham opposed moving without hearings, saying Tuesday that he aimed to "keep the process like we had it before."

"I think it's important to the country to have a hearing," he told reporters. "I'm confident we can have a hearing that will allow the nominee to be submitted to the floor before Election Day. Following the precedents of the Senate, I think we can do that."

As for a final confirmation vote before Nov. 3, Graham said, "I'll leave it up to Mitch."

"A lot of senators, including on the Republican side, want to be able to show that they went through a thorough process," said Mark Champoux, who supervised Department of Justice work on Trump's judicial nominations from 2018 until July. "It will be other parts of the process that might be condensed."

Democrats are fiercely opposed to quick action, charging hypocrisy after Republicans kept Justice Antonin Scalia's seat open nearly a year after his February 2016 death. On Tuesday they protested by invoking a scheduling rule that postponed some committee meetings.

Champoux, now a partner at Davis Graham & Stubbs LLP, said Democratic senators' supporters expect them to do everything possible to slow the process.

But the minority party cannot stop a confirmation or push it until after the election.

Until 2017, it took 60 votes to confirm a justice, usually requiring the nominee to gain at least some bipartisan support. That ended with recent "nuclear option" rules changes.

In 2013, Democrats dropped the confirmation threshold for all judgeships below the Supreme Court to a simple majority from a three-fifths supermajority. Republicans in 2017 extended the change to the high court.

Also on Tuesday, 10 former federal judges urged senators to postpone a confirmation until after Inauguration Day because the judiciary's "legitimacy is largely drawn from the public's faith that its decision-making is fair and true."

Republican senators are unlikely to be swayed by a letter signed almost entirely by Democratic picks. One exception was former Third Circuit Judge William H. Webster, appointed to the bench by President Richard Nixon and later tapped by President Ronald Reagan to lead the Central Intelligence Agency.

Update: This article has been updated with new information throughout.