The nearly six-hour hearing kicked off with opening statements from Senate Judiciary Committee members and the judge herself, who wore a black mask whenever she was not speaking. Several senators, including two in quarantine, joined by videoconference as they debated President Donald Trump's pick to replace the late Justice Ruth Bader Ginsburg. 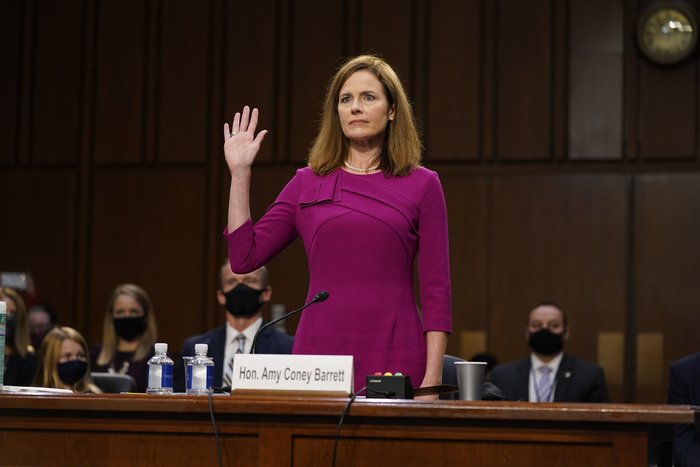 Democrats stuck to a coordinated argument against Judge Barrett as a possible vote to strike down the 2010 health care law, sharing stories and poster-size photos of constituents who benefited from the health care overhaul.

With just a few weeks before a presidential election and another high court hearing on the ACA's constitutionality, Sen. Sheldon Whitehouse, D-R.I., said Americans should consider this nomination a "judicial torpedo aimed at their essential protections."

Republicans lauded Judge Barrett's commitment to originalism and countered that she has not said how she would rule in any particular case. They praised her resume and said the Democrats' focus on health care policy showed they couldn't find deficiencies in her record.

"What speaks the loudest is the dog that didn't bark," said Sen. Ted Cruz, R-Texas. "We've heard very little about the nominee. ... That's because, by any measure, Judge Barrett's credentials are impeccable."

The 48-year-old jurist graduated first in her class from Notre Dame Law School, clerked at the D.C. Circuit and the Supreme Court, spent two years in private practice and taught law for 15 years. She was appointed to the Seventh Circuit in 2017.

The American Bar Association's judicial evaluation committee on Sunday gave Judge Barrett its top rating of "well-qualified" without elaboration. However, a minority of the ABA panel voted for the middle "qualified" rating, marking the first time in nearly 20 years a Supreme Court selection did not draw a unanimous top rating. In 1991, now-Justice Clarence Thomas received a "qualified" rating with a minority voting "not qualified."

When the time finally came for her own opening statement, Judge Barrett credited mentors including the late Justice Antonin Scalia, for whom she clerked.

"Justice Scalia taught me more than just law. He was devoted to his family, resolute in his beliefs and fearless of criticism," she said. "His judicial philosophy was straightforward: A judge must apply the law as it is written, not as she wishes it were."

"You will be an intellectual powerhouse on the Supreme Court and steer their focus toward textualism and originalism as rightful guiding philosophies," Blackburn told the judge.

Although Democrats focused almost exclusively on health care, one raised the broader issue of respect for precedent. As a law professor, Judge Barrett wrote that originalism can require overturning precedents that don't comport with the original public meaning of a law or constitutional provision.

"I'm deeply concerned [that] your approach to reviewing and reconsidering long-settled cases may overturn some principles for which Justice Ginsburg fought her entire adult life," Coons said, citing precedents on privacy, contraception, abortion and same-sex marriage.

Hawley cited Democratic comments during the nominee's 2017 confirmation hearings for the Seventh Circuit. The panel's top Democrat, Sen. Dianne Feinstein of California, told Judge Barrett at the time that "the dogma lives loudly within you."

Hawley also referenced questions that committee Democrats asked a Nebraska judicial nominee about membership in  the Knights of Columbus, a Catholic service organization that has advocated against abortion and same-sex marriage. 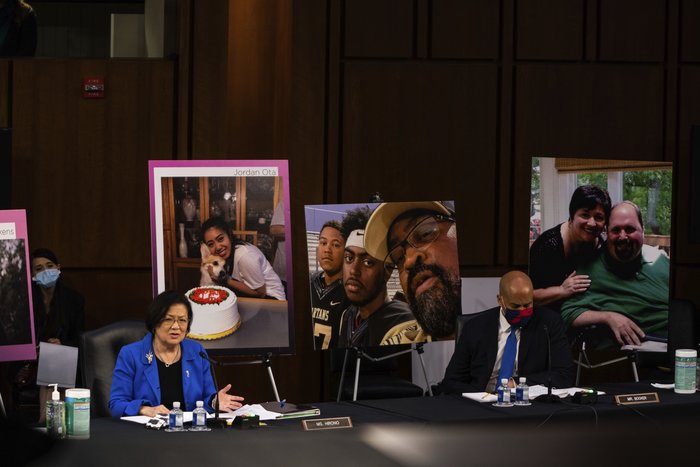 "It's an attempt to bring back an old standard that the Constitution explicitly forbids — a religious test for holding office," Hawley said, alleging a "pattern and practice of religious bigotry from members of this committee."

Several other GOP senators raised the issue, but Democrats dismissed it as posturing.

"We have taken an oath to a Constitution that says no religious test. Enough said," Illinois Sen. Dick Durbin told reporters after the hearing.

Monday was the first of four days of hearings. Some conservatives called for skipping hearings for the first time in 60 years and proceeding quickly to a final vote, but Chair Lindsey Graham, R-S.C., said the committee would allow Americans to judge for themselves even if senators' positions are unlikely to change.

Democrats have almost uniformly said they will vote against confirmation because of the election's proximity, accusing Republicans of hypocrisy for proceeding with the nomination after having refused to consider President Barack Obama's 2016 nomination of Judge Merrick Garland for nearly a year. GOP leaders argue this time is different because the same party holds both the White House and Senate.

While Democrats have blasted the speedy confirmation process as "illegitimate," they have also acknowledged they have little power to halt it.

"We don't have some clever procedural way to stop this sham, to stop them from rushing through a nominee," Minnesota Sen. Amy Klobuchar said Tuesday.

Sen. Mike Lee, a Utah Republican who experienced symptoms and tested positive about 10 days ago, appeared in person after he said doctors cleared him. The other recently infected GOP senator, Thom Tillis of North Carolina, appeared by videoconference. So did Cruz, who has been quarantining after contact with Lee but said he would appear in person Tuesday.

Lee and Tillis were among the Republican senators at the White House Rose Garden event last month when Trump announced his nomination of Judge Barrett. More than 30 attendees, including the president, have since tested positive for the coronavirus. Senate Republicans have vowed that will not impede the confirmation process.

The committee is set for a longer hearing Tuesday, when its 22 members each will get up to 30 minutes to question Judge Barrett.