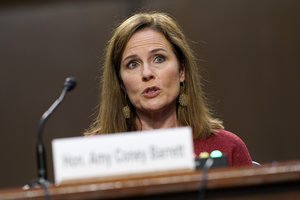 "If I were confirmed, you would be getting Justice Barrett, not Justice Scalia," Judge Amy Coney Barrett told lawmakers during the second day of her Supreme Court confirmation hearings Tuesday. (AP Photo/Susan Walsh, Pool)

The judge kept an even keel throughout the marathon session, although Democrats expressed frustration that she declined to address crucial precedents and whether she would recuse herself in some future cases. She maintained strong support from every Republican and remains on track for confirmation later this month.

Judge Barrett said she would not be controlled by political supporters, policy preferences or the previous statements of her mentor, the late Justice Antonin Scalia, whose judicial philosophy she shares.

Sen. Amy Klobuchar, D-Minn., pointed to President Donald Trump's comments that he wants a ninth justice seated quickly because he expects the presidential election to end up at the high court.

"I can't really speak to what the president has said on Twitter. He hasn't said any of that to me," the judge replied. "I am 100% committed to judicial independence from political pressure."

She also said her past academic critiques of Supreme Court rulings upholding the Affordable Care Act did not constrain her future votes on the law.

"One of the upsides of being an academic is you can speak for yourself" rather than reach a shared opinion with colleagues, she said. "It's different with the judicial decision-making process. It's difficult to say how I would have decided that case."

And while she called Justice Scalia a key mentor, she said she might vote differently than the conservative icon who was one of the chief theorists of originalism.

"If I were confirmed, you would be getting Justice Barrett, not Justice Scalia. I don't think anyone should assume that just because Justice Scalia decided a decision a certain way, I would too," she said.

Democrats on the Senate Judiciary Committee continued their focus on the health care law after sharing stories Monday of individual constituents who have benefited from its provisions.

But Judge Barrett said the protections highlighted by those personal accounts aren't at issue in the Supreme Court case on the ACA that's set for argument next month, adding that the case's outcome hinges on legal questions, not practical impact.

"If there were policy differences or policy consequences, those are for" Congress to work out, she told the lawmakers. "For the court, it's really a question of adhering to the law and going where the law leads, and leaving the policy decisions up to you."

"They need one more Trump judge on the bench before Nov. 10 to win and strike down the entire Affordable Care Act," Harris said. "President Trump promised that every justice he put forward would 'do the right thing unlike Bush's appointee John Roberts on Obamacare.'"

Sen. Chris Coons, D-Del., questioned whether the judge's academic critiques of the court's approach in past decisions amounted to fighting words staking out opposition to the law.

"For those to be fighting words, you would have to assume that my critique of the reasoning reflects a hostility to the ACA," she said, adding that the pending case deals with different issues.

Republicans charged that Democrats were using the specter of a ruling against the ACA to fearmonger, propagandize and fundraise.

The judge told Sen. Mike Crapo, R-Idaho, that she voted in a law school moot court last month to find the individual mandate unconstitutional but severable, leaving the rest of the law intact. She noted that a mock ruling does not signal a real ruling, but Crapo suggested it should quell fears about her vote.

The judge also faced Democrats' questions about whether she would recuse herself from election litigation this year, given Trump's statements about the possibility of the contest being decided by the high court.

"To protect confidence in both you and the court, will you commit to recuse yourself from any dispute that arises out of the 2020 presidential election?" asked Sen. Patrick Leahy, D-Vt.

Judge Barrett refused to commit one way or the other, but said she "had no conversation with the president or any of his staff about how I might rule … [and] made no precommitments to anyone."

She promised to follow the recusal statute and consult with other justices but said she could not "short-circuit that entire process" and announce a decision in advance on what amounts to a judicial ruling in itself.

Sen. Richard Blumenthal, D-Conn., bluntly said it would be unethical not to recuse after the president's comments.

"I think you know it would be wrong," Blumenthal told her, "not because of anything you've done [but] because of what Donald Trump has done, and my Republican colleagues, because they have indelibly put at issue your integrity."

"I can't pre-commit or say I'm going in with some agenda, because I'm not. I have no agenda to try to overrule" those decisions, Judge Barrett told Feinstein.

The nominee said scholars don't consider Roe v. Wade among the handful of foundational cases called "super-precedents" because there are still broad calls to overturn it — although she said omitting Roe from that list doesn't amount to calling for its reversal.

The nominee previously expressed a personal opposition to abortion and acknowledged that she still has personal views, but she said they wouldn't impact her legal rulings.

"My policy views, my moral convictions, my religious beliefs do not bear on how I decide cases," she said.

Several Democrats brought up a 2006 advertisement she signed onto, but the judge only recalled backing a statement about opposing "abortion on demand," not the accompanying statement calling to end "the barbaric legacy of Roe."

She told Blumenthal she "wasn't trying to hide it" but rather didn't originally provide the ad to the Senate because she didn't remember it and it wasn't clearly covered by the Senate questionnaire.

Blumenthal pressed her to say whether Roe was correctly decided, which Judge Barrett declined to do, citing ethics and consistent precedents from past nominees.

The hearing also featured some personal testimony from Judge Barrett. She brought up her family in response to a question about the video of a Minneapolis police officer killing George Floyd in May.

"Given that I have two Black children, that was very, very personal for my family," she said, recalling the experience of her 17-year-old daughter who was adopted from Haiti.

"We wept together in my room," she said. "To understand that there would be a risk to her brother [who was also adopted from Haiti] or the sons she might have one day of that kind of brutality has been an ongoing conversation."

Sen. Dick Durbin, D-Ill., asked Judge Barrett how she viewed racism in America. She said it was obvious that "racism persists in our country" but that "giving broader statements and making broader diagnosis about the problem of racism is kind of beyond what I'm capable of doing as a judge."

She later told Sen. Cory Booker, D-N.J., that "in our large criminal justice system, it would be inconceivable that there isn't some implicit bias."

Her family also came up when committee Chairman Lindsey Graham, R-S.C., asked about her experiences since being nominated to the high court.

"This is a really difficult, some might say excruciating, process," she said. "I've tried to be on a media blackout for the sake of my mental health, but you can't keep yourself walled off from everything, and I'm aware of a lot of the caricatures that are floating around" about her Catholic faith and her multiracial family.

The chairman argued Judge Barrett's nomination amounted to a question for the American people: "Is it OK to be religiously conservative … and seek a seat on the Supreme Court."

The nomination hearings are set to resume Wednesday for a slightly shorter third and final day with the judge.