Law360 (October 27, 2020, 6:15 PM EDT) -- Nearly 60% of law firm and legal organization political action committee contributions have been placed in the hands of Democrats this election cycle, new data shows, but a few key Republicans also saw big donations, demonstrating what experts say is a likely effort by firms and lawyer associations to gain access to those in power.

Corporate PACs of all kinds have long been known as a way for organizations to build relationships with incumbents and other candidates likely to win and hold office through monetary contributions, and law firms are no exception, according to Michael S. Kang, a research professor and campaign finance expert at Northwestern Pritzker School of Law. 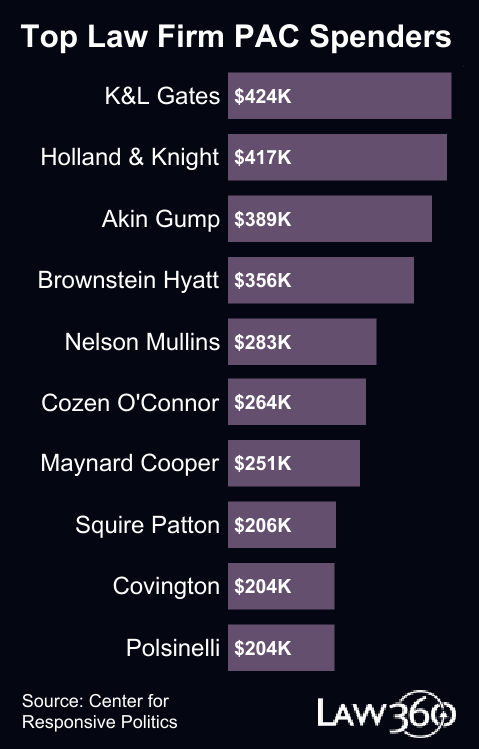 "Law firms are important hubs in partisan political networks, and law firm partners are often plugged into party strategy and savvy about where the money will be most useful and valued," Kang said.

That could explain why Sens. Gary Peters, D-Mich., and Cory Gardner, R-Colo., are both among law firm PACs' biggest recipients this election cycle — both Peters and Gardner are in tight races that might swing party control of the U.S. Senate.

A Peters victory could swing the Senate to majority Democrat, while a Gardner win could ensure a Republican majority.

"Giving to them is strategically smart and yields the highest potential payoffs for their parties if they help lead to victory," Kang said.

Other popular recipients, though, may not be in particularly tight races, but do hold positions of authority in congressional committees that are important to the law firms and their clients, according to Robert Boatright, a professor and chair of Clark University's department of political science. 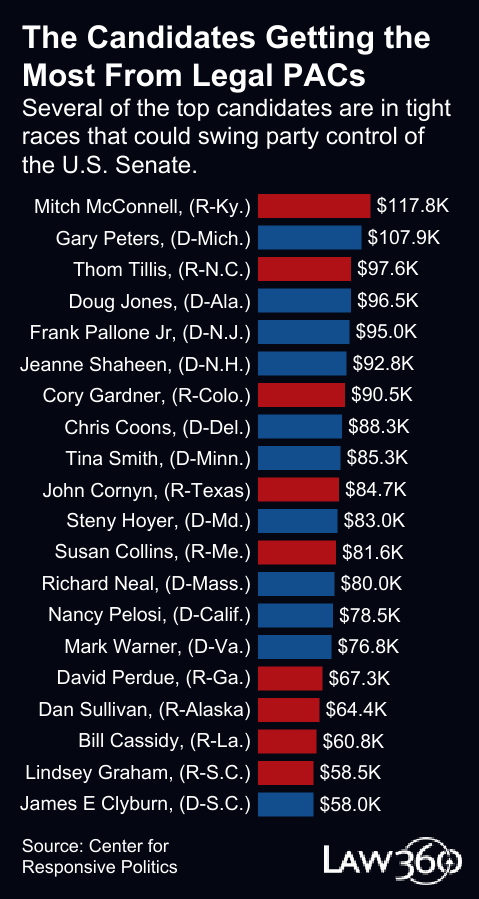 Two of the top recipients, Sens. John Cornyn, R-Texas, and Jeannie Shaheen, D-N.H., are on the finance and appropriations committees, respectively. Peters and Gardner are both on the commerce committee, and Sen. Mitch McConnell, R-Ky., is the Senate Majority Leader, he said.

"Over the course of their past term, all of these people had some reason to think that they might be facing a strong competitor, even though in some instances their competitors wound up being a little weaker than might have been expected," Boatright said. "So all of these candidates likely put some work into raising PAC money."

Another thread connecting the donations is that top law firm PAC recipients are not known as being particularly politically polarizing, the way Sen. Bernie Sanders, I-Vt., or Ted Cruz, R-Texas, might be seen, Boatright noted.

"So they're safe bets, and they can use the money," he said.

That could be an indicator that Democrats will fare well in congressional races this time around, according to experts. 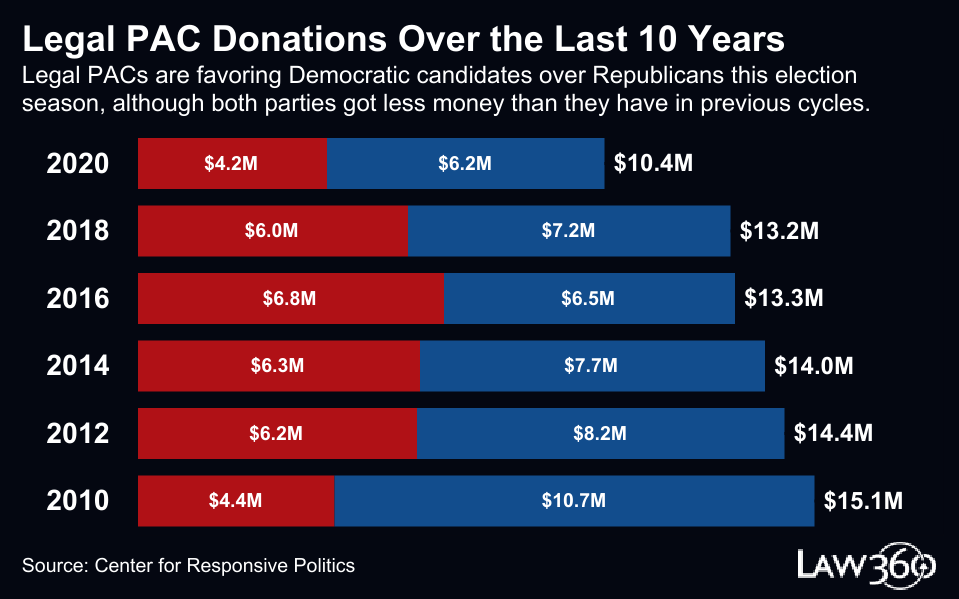 
David Primo, a professor of political science and business administration at the University of Rochester, said that fluctuations in law firm PAC giving often follow changes in who controls Congress. Primo is the coauthor of a book, "Campaign Finance and American Democracy: What the Public Really Thinks and Why It Matters."

"More generally, PACs make giving decisions with the goal of developing relationships with members of Congress who are relevant to the law firms' interests — interests which are often a function of the firms' client base and which party controls government," Primo said. "That's why you can look at overall party giving and see changes over time that are a function of the balance of power in Congress and the presidency."

Note: All PAC contribution data comes from the Center for Responsive Politics, which has a special method of tagging to obtain it from Federal Election Commission filings. The data is current as of the FEC's final pre-election filing deadline of Oct. 22. It comprises PACs formed by law firms and legal organizations, including the American Association for Justice, which donated almost $2 million to candidates, primarily Democrats. The final numbers for 2020 may change slightly when all reporting is completed for this election cycle.

Correction: A previous version of this story inaccurately described the partisan makeup of the American Association for Justice PAC's donations.