Law360 (October 28, 2020, 11:05 PM EDT) -- The number of new employment lawsuits filed in federal court has dropped dramatically in 2020 amid the coronavirus pandemic, according to a new report by Lex Machina.

Lex Machina's latest report on federal employment litigation, released Thursday, found workers filed just over 14,000 lawsuits in the first three quarters of 2020, compared to about 16,700 and 16,000 in 2018 and 2019, respectively. The figures put this year's employment case filings well below the totals of about 21,000 to 23,000 for each of the last 10 years, according to the report.

The drop-off has been especially pronounced in the second and third quarters, in which workers filed 4,669 and 4,278 cases, respectively. Workers filed between 4,900 and 6,000 cases in each of the prior nine quarters, Lex Machina found. 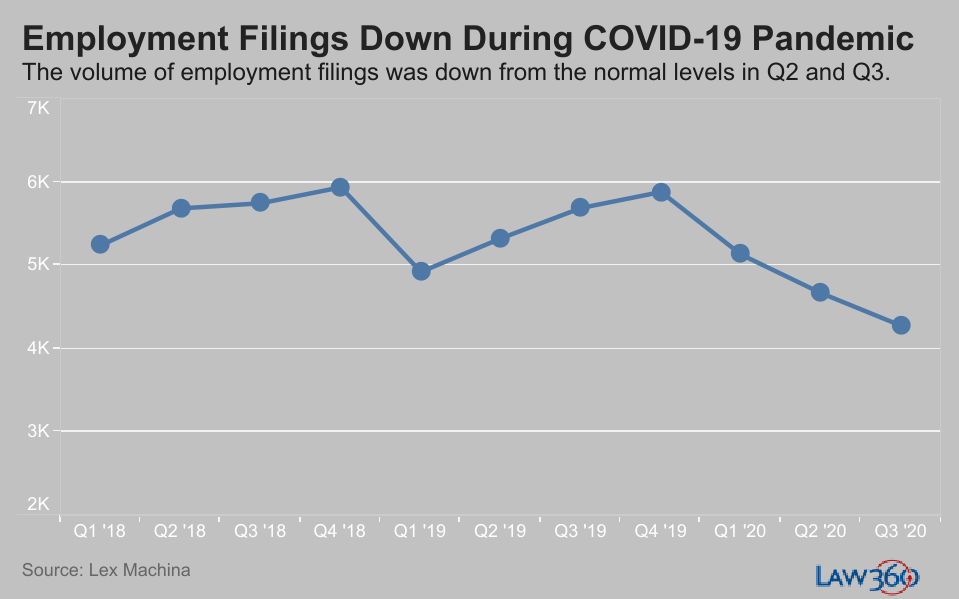 
That the number of new case filings has dropped in 2020 comes as no surprise to employment practitioners.

"I would guess case numbers overall have dropped, not just employment cases … and that's partly because, as someone who was trying to file cases during that time, [I know] it was difficult," said Juno Turner, litigation director for workplace-focused impact litigation group Towards Justice.

The magnitude of the reduction varies across different legal areas, Lex Machina found. Workers filed about 2,500 accommodation claims in the first three quarters of 2020, close to their rate in 2018 and down about 200 cases from 2019. FLSA and FMLA litigation also saw declines of less than 10% from 2019, while the numbers of new harassment and disability discrimination claims were down by roughly a fifth. 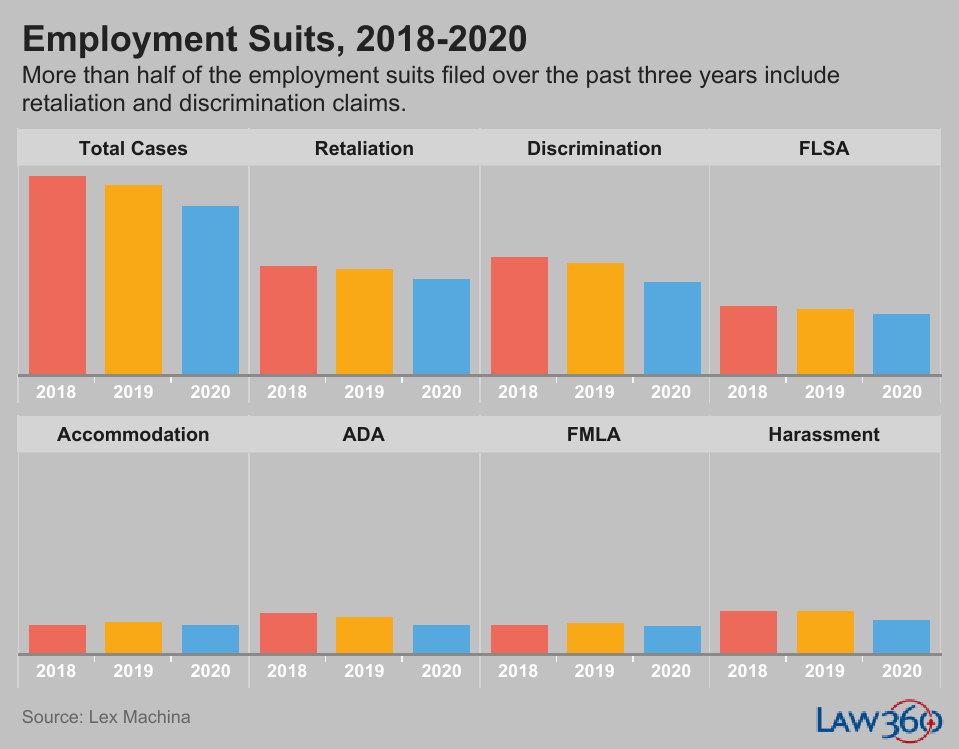 
Brian Murphy, a defense litigator and partner at Sheppard Mullin Richter & Hampton LLP, said the decline in harassment and discrimination may be tied to the shift of many jobs to remote, because "when there's less opportunity for person-to-person interaction … claims like harassment or discrimination are expected to fall." Workers may also be wary of "rocking the boat" by filing claims against businesses that are struggling during the pandemic, he said.

Employers' fortunes may also factor into the figures because suits against ailing businesses may not be worth the trouble for workers, said Peter Romer-Friedman, a plaintiffs' employment lawyer with Gupta Wessler PLLC.

"I think this is probably the biggest driver," he said. "Lots of employers are going bankrupt or out of business, and workers and their counsel have to think about whether the defendant is judgment-proof."

Though the pandemic appears to have reduced case volume overall, coronavirus-related claims have accounted for more than 300 cases through the first three quarters, Lex Machina found.

Lex Machina tracked employment lawsuits that either would not have been filed but for the pandemic because the allegations are tied to it, or that allege pandemic-related circumstances exacerbated a dispute. Workers have filed 309 such cases overall, 200 of which came in the third quarter alone, the report found.

Just under three-quarters of these suits — 228 — include claims that workers were retaliated against for reasons related to the virus, Lex Machina said. Workers filed FMLA claims in 142 suits and FLSA claims in 129, according to the data. On the other end of the spectrum, workers accused their employers of disability discrimination in 41 cases and lodged harassment claims in 29.

Murphy said he expects to see more wage claims going forward given the extent to which the pandemic has complicated paying workers. For example, the shift to telework has made it harder for employers to track workers' hours and determine how much to pay, he said.

"It's certainly easier to do in the workplace … you're working, that is compensable time," Murphy said. "When someone is at home and they're taking breaks to attend to personal tasks, walking the dog, et cetera, it gets a little bit squirrely."

Workers who have to submit to COVID-19 exams as part of their jobs may also test whether they're owed pay for time spent waiting in line or commuting to testing facilities, he added.

The report also tracks which law firms have been busiest during the pandemic. Employment giants Littler Mendelson PC, Jackson Lewis PC and Ogletree, Deakins, Nash Smoak & Stewart PC led management-side firms in 2020, representing defendants in 934, 871 and 684 cases, respectively, Lex Machina found. But Jackson Lewis has handled more coronavirus-related cases: The firm has had a hand in 23 such cases so far, more than twice as many as Ogletree and Littler.

Lex Machina also found cases have been slower to reach trial during the pandemic. The 136 cases that reached trial during the first three quarters of 2020 hit that mark after a median 859 days, compared to a median 721 days for the 285 cases that reached trial over the same period last year. But courts have otherwise processed cases about as quickly as ever, deciding about 2,000 cases via summary judgment in a median 627 days, compared to about 2,400 cases and 609 days last year, the report found.

"Federal judges have been very good at keeping their dockets moving," Romer-Friedman said. "Judges and their law clerks are resolving motions just as timely as they normally do. At the same time, jury trials are really not happening very often in the civil context."