Law360 (November 2, 2020, 6:47 PM EST) -- There are many items on the table in this year's presidential election that will mold the market for mergers and acquisitions, including whether the winner can get control of the pandemic, what U.S. tax policy will look like going forward and how international diplomacy will impact cross-border M&A.

Experts maintain that the market for M&A is slated to ramp up no matter who wins. According to the 16th Annual M&A Outlook Survey from law firm Dykema Gossett PLLC, 71% of respondents expect the M&A market to strengthen over the next 12 months, up from 33% in last year's survey. Still, the dealmaking environment could look very different depending on whether Republican President Donald Trump or Democratic challenger Joe Biden is the victor.

"Typically, when you have a big election year like this, there is a lot of talk and focus on the impact of the election," said Rahul Patel, a partner at King & Spalding LLP and co-chair of the firm's global private equity and mergers and acquisitions practice. "We've seen people take actions accordingly, where they were either hurrying up to try and get deals done in anticipation of tax rates or costs of capital going up, or, on the other hand, slowing things down to wait for a period of less uncertainty."

The coronavirus pandemic has not abated, with cases and deaths continuing to rise in the U.S. on a daily basis, and COVID-19 is not going to disappear as an issue once the election is over. According to the Dykema survey — which features insight from 225 CEOs, chief financial officers, managing directors and other professionals involved in M&A across more than a dozen sectors — almost 63% of respondents ranked COVID-19 as the top threat to M&A activity going forward. In second and third place, according to the survey, were a Biden victory and a Democratic sweep of the House and Senate.

"The real issue is how we are going to get out the back end of this pandemic," said Michael Fieweger, a partner at Baker McKenzie and chair of the firm's North American private equity practice group.

That said, dealmakers have proven it's possible for the M&A market to remain active in a pandemic-challenged world, as evidenced by the many major transactions that have taken place in the months since the COVID-19 outbreak, with recent examples including Advanced Micro Devices' $35 billion acquisition of fellow semiconductor company Xilinx, and ConocoPhillips' $13 billion merger with peer Texas oil and gas company Concho Resources.

With that in mind, optimists may argue that lawyers and dealmakers have learned how to get stuff done through phone calls or Zoom, and in some parts of the U.S. people have begun having socially distant drinks or lunch. Still, there's no question that it is more difficult to run a deal process in the current environment, according to Aaron Cutler, a partner in the global regulatory practice group of Hogan Lovells.

"You can't travel and see somebody right now," he said. "It's really difficult to do that, and it's impacting all of us. It's difficult to further relationships, build trust and do significant business together when you can't have significant social interactions or spend time in the office together."

Much of what the winner will do after the election remains unknown, but taxes are one area where there is at least some clarity. Under Trump's Tax Cuts and Jobs Act, which went into effect on Jan. 1, 2018, the corporate tax rate was lowered from 35% to 21%, making M&A deals less expensive.

Biden's proposed tax plan would increase the corporate tax rate to 28%. It would also apply a minimum 15% tax rate on book income — which is the income reported on financial statements — for corporations with at least $100 million of book income.

"Tax policy is going to be huge for M&A activity," Cutler said.

Of course, Biden could struggle to get his tax plan through Congress unless the election also results in the Senate turning blue.

"If the Senate doesn't flip, Biden won't be able to get his tax plan through as drafted," Cutler said. "He'll have to compromise on that in order to get anything through."

Whether or not the Senate flips, a Biden presidency will probably mean M&A becomes more expensive. Therefore if he wins, there will likely be a flurry of M&A activity as companies try to get deals done before new tax rates can go into effect.

That's especially true for private equity firms, which are also anticipating a potential rise in capital gains tax rates that would hamper investment returns, according to Brian Richards, a partner in Paul Hastings LLP's private equity and M&A practices and chair of the firm's global PE practice. Additionally, PE players are preparing for a potential push from the progressive wing of the Democratic Party to tax carried interest as ordinary income, which Richards said "would be something of a third-rail jolt for private equity."

"Look for more action — and transactions — among entrepreneurs looking for equity partners even with depressed valuations, as well as corporates seeking deals before the tax advantage is taken away," Richards said.

Since many of the changes Biden would like to make require legislation, they would be unlikely to go into effect until the start of 2022, Cutler said, giving deal-hungry companies some time to try to get transactions through sooner rather than later.

"A lot of changes Biden would make will be enacted for Jan. 1, 2022, and won't be retroactive, so 2021 could be a gangbusters year for dealmaking," Cutler said. 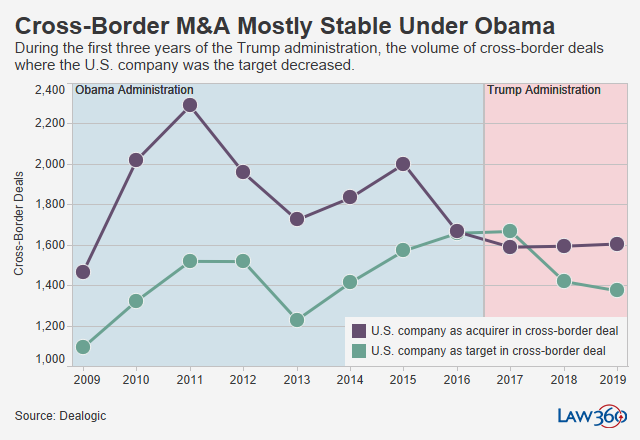 
The president's relationship with the rest of the world can play a significant role in how comfortable countries feel doing deals with businesses based in the U.S., and depending on the outcome of this year's election, there could be major changes in the state of multiple global relationships.

"If Trump were to win, it's going to be more of the same," Fieweger said. "You'd tend to have more of a dampening of cross-border transactions under Trump. I don't expect the Biden administration to roll back all protectionism, but I do think, especially with respect to our friends, people would feel it's a more friendly environment to invest in the U.S."

By "friends," Fieweger means allies like Canada, the U.K. and France. Much of the tension when it comes to cross-border M&A, however, relates not to them, but to China. The Committee on Foreign Investment in the United States, which polices M&A that involves foreign entities in order to protect U.S. national security, has played a major role under both the Trump and Obama administrations. Most recently, pressure from CFIUS played a role in Oracle's announced acquisition of a minority stake in TikTok as the popular Chinese social media app tries to alleviate U.S. concerns about U.S. user data.

No matter whether Trump or Biden wins, it's expected that the U.S. will maintain a guarded position when it comes to deals featuring Chinese entities, which could dampen the overall numbers for cross-border M&A.

"It may still be tough to do cross-border deals, given issues like COVID and our relationship with China," Cutler said. "I don't think a Biden administration would have a big pivot from Trump's policy on China."