Law360 (November 4, 2020, 10:15 PM EST) -- With a path to electoral victory narrowing, President Donald Trump unleashed an onslaught of lawsuits and challenges Wednesday, suing to stop vote counting in Pennsylvania, Michigan and Georgia, promising to demand a recount in Wisconsin, and joining a U.S. Supreme Court suit over mail-in ballots. 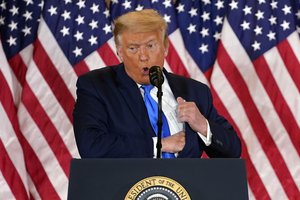 Just hours after Michigan and Wisconsin appeared to break in favor of former Vice President Joe Biden, and with Pennsylvania and Georgia still too close to call, Trump's attorneys launched litigation on multiple fronts seeking to stall the count on grounds poll watchers were allegedly denied access to the vote counting.

In an appeal to the Commonwealth Court of Pennsylvania filed by Linda Kerns and Porter Wright Morris & Arthur attorneys Ronald Hicks and Carolyn B. McGee, the Trump campaign sought to overturn a Philadelphia judge's election night denial of "meaningful access" to watch the counting of votes at the Pennsylvania Convention Center, where a barrier separated campaign surrogates from the tables where ballots were being inspected and opened.

The Trump campaign declared victory in the Keystone State on Wednesday afternoon, even though 1.2 million votes — mostly from around Philadelphia and Pittsburgh — remain to be counted. Trump attorney Rudy Giuliani said without evidence that ballots counted in Pennsylvania without being observed by the campaign should be considered fraudulent, and even thrown out.

"We never got to see a single one of them," Giuliani said during a Wednesday press conference. "120,000 went through. ... They should be taken out of the account."

"The eyes of the country are on Pennsylvania, but Pennsylvania has kept eyes off of the absentee ballot counting process all along, and that must stop today," the Trump campaign said in a statement. "In Philadelphia and elsewhere, Democrat officials forced our observers to stay 25 feet or more from the counting process, leaving no meaningful way whatsoever for our observers to do their jobs. We are also suing to temporarily halt counting until there is meaningful transparency and Republicans can ensure all counting is done above board and by the law."

Gov. Tom Wolf said the lawsuits and demands for closer observation amounted to intimidation, and said the state would continue counting.

"Pennsylvania is going to count every vote and make sure that everyone has their voice heard. Pennsylvania is going to fight every single attempt to disenfranchise voters and continue to administer a free and fair election," he said. "Our election officials at the state and local level should be free to do their jobs without intimidation or attacks. These attempts to subvert the democratic process are disgraceful."

Pennsylvania Attorney General Josh Shapiro, a Democrat also facing reelection, had lashed out at Trump earlier on election night for the president's attempts to question the election's integrity, leading to criticism and a call to step aside from any election-related litigation by his Republican opponent, Heather Heidelbaugh.

Trump's blast of litigation came on a day in which the slow but steady drip of mail-in ballots eroded the lead he had built on Election Day, even as key states remained too close to call when given the ballots that were yet to be counted — or yet to arrive.

Slow service by the U.S. Postal Service had led several states, including Pennsylvania, to allow extra time after Election Day for ballots to arrive and still be counted. A Washington D.C. federal judge rapped the USPS Wednesday for failing to follow an order to thoroughly sweep facilities for any ballots that had yet to be delivered or returned.

Pennsylvania Republican candidates had also challenged whether counties, campaigns and political parties could get lists of voters whose mail-in ballots had been rejected for technical mistakes, like missing signatures or privacy envelopes, and contact them to cast provisional ballots on Election Day. The Democratic National Committee sought to join two of those suits Wednesday as one judge expressed skepticism over the claims.

In Philadelphia, the Trump campaign's attorneys had challenged the distance that all observers were required to maintain from the actual counting, but Philadelphia Court of Common Pleas Judge Stella Tsai dismissed the campaign's complaint on election night.

"Given that observers are directed only to observe and not to audit ballots, we conclude, based on the witness's testimony, that the Board of Elections has complied with the observation requirements," Judge Tsai's order said. "We, however, would not discourage the Board from considering the implementation of arrangements to allow for an additional corridor for observation along the side of the canvassing tables if feasible — subject to spatial distancing under COVID-19 and voting privacy requirements."

Lauren Vidas of JRMogil Law, a former Obama campaign attorney who was observing the special election court sessions Tuesday for Protect Our Vote Philly, told Law360 the campaign tried twice to argue that its observers couldn't get close enough to read the ballots as they were being opened and verified from their designated area of the convention center. The campaign argued observers needed "meaningful observation" or "meaningful access," which the city's attorneys countered was not part of the Pennsylvania Election Code, Vidas said.

The first time, the complaint was withdrawn without prejudice; the second time it was dismissed, Vidas said.

In the Michigan Court of Claims suit, the campaign claimed the secretary of state was allowing the counting of ballots without inspectors from each party being present, and contested the state's use of drop boxes without campaigns' "challengers" present to ensure all ballots were handled in accordance with the law.

"Secretary Benson is violating the Michigan Constitution and Michigan election law by allowing absent voter ballots to be processed and counted without allowing challengers to observe the video of the ballot boxes into which these ballots are placed," the Michigan complaint said. "Plaintiffs ask Secretary Benson to segregate ballots cast in these remote and unattended ballot drop boxes and, before the ballots are processed, removed from their verifying envelopes and counted, allow designated challengers to view the video of the remote ballot box."

The campaign released a statement that it was seeking "meaningful access" to counting in Michigan as well.

In the U.S. Supreme Court, the campaign asked to join the suit brought by Pennsylvania's Republican Party claiming the three-day extension granted by the state's justices improperly usurped the legislature's authority to manage elections and changed the definition of "election day." The court had previously split 4-4 on the question, then declared it was too close to the election to reconsider. However, Justice Samuel Alito had left open the possibility of hearing the case after the vote if the state agreed to segregate the ballots that arrived after Election Day.

"A state court's commandeering of 'the legislative scheme for appointing Presidential electors' — as happened here — 'presents a federal constitutional question' of nationwide significance," the campaign's brief said. "Indeed, three Justices have already explained that 'the Pennsylvania Supreme Court's decision calls out for review by this Court.'"

The campaign also said Wednesday it would begin the process of requesting a recount in Wisconsin, another Midwest state that had narrowly gone for Biden. Wisconsin election rules allow a recount if the margin between the top two candidates comes it at 1% or lower, a benchmark that appears to have been met.

In Georgia, the Trump campaign filed suit late Wednesday demanding that the state segregate all ballots received after Election Day, claiming an election observer saw a batch of 53 late-arriving ballots being added to the pile to be counted by the Chatham County Board of Elections. But the observer's declaration, attached as an exhibit to the complaint, only said he did not see what happened to the 53 ballots during a period he had left the room, and did not specifically say when they had been received.

A Georgia court had ruled that ballots received a few days after Election Day could still be counted, but the Eleventh Circuit overturned that extension on Oct. 2.

"A significant degree of confusion may still exist regarding whether ballots received after 7:00 P.M. can be legally counted in Georgia — and they cannot," the Trump campaign's lawsuit said. "Petitioners request this court command the CCBE to collect, secure, and safely store all absentee ballots received by the CCBE after 7:00 P.M. on Election Day and provide an accounting of all such absentee ballots."

Boockvar is represented by J. Bart DeLone, Sean A. Kirkpatrick, Michael J. Scarinci and Daniel B. Mullen of the Pennsylvania Office of the Attorney General.

The Philadelphia County Board of Elections is represented by Susan M. Lin of Kairys Rudovsky Messing Feinberg & Lin LLP, and Benjamin H. Field and Sean J. McGrath of the City of Philadelphia Law Department.