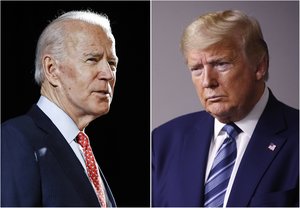 In a press call Thursday morning, Trump senior adviser Jason Miller said to "expect there will be additional legal action to make sure we have eyes on previous ballots that have been counted."

He expressed concerns over "magical sacks of ballots" for former Vice President Joe Biden and said the campaign wants to make sure Democrats "are not able to pull a fast one on the American people."

Biden adviser Bob Bauer called the suits "silly" in his own briefing Thursday morning and said they were "part of a broader misinformation campaign."

"These lawsuits don't have to have merit. That's not the purpose," Bauer said. "It's to create an opportunity for them to message falsely about what's taking place in the election process."

The Trump campaign and Philadelphia election officials agreed Thursday to allow Democrats and Republicans each to bring in 60 people to observe the ongoing vote count in the city after the Trump campaign claimed its watchers had been unfairly denied access.

The deal was brokered at an emergency hearing in Pennsylvania federal court Thursday evening. The Trump campaign claimed election officials in Philadelphia had violated a state court order handed down hours earlier requiring that observers be allowed to watch the vote count from six feet away.

Attorneys for the county board of elections, however, insisted the board had complied with the order and observers from both political parties had been treated equally.

In the state court ruling, which the Trump campaign described as a "massive legal victory," Judge Christine Fizzano Cannon of Pennsylvania's Commonwealth Court said watchers should be able to observe all aspects of the count from as close as six feet.

The ruling flipped an Election Day ruling by a Philadelphia County judge.

Speaking from the White House press room Thursday evening, Trump depicted himself the "legal" winner of the election and a candidate for "farmers and police officers," while he accused Biden of running a "corrupt Democrat machine" funded by "big media, big money and big tech."

Trump reiterated his oft-repeated claim that mail-in ballots are fraudulent, although he did not mention his own decision to vote by mail in Florida in August. The president also said he suspected the "tremendous litigation" already begun over his campaign's voter fraud allegations could make its way to the U.S. Supreme Court.

"Ultimately I have a feeling judges are going to rule," he said, before ending the event without fielding questions from the press.

A Georgia state judge on Thursday morning threw out a lawsuit brought by the Trump campaign and Georgia Republicans that had accused the Chatham County Board of Elections, which covers Savannah, of potentially mishandling 53 late-arriving ballots.

Judge James F. Bass tossed the suit without explanation after an hourlong hearing.

The suit, filed late Wednesday, claimed a Trump election observer saw a batch of late-arriving ballots added to a pile to be counted by election officials. An attached declaration by the observer did not go that far, however, saying only that he did not see what happened to the 53 ballots while he was out of the room.

In October, the Eleventh Circuit overturned a ruling by a Georgia court that had said ballots received a few days after Nov. 3 could still be counted.

A D.C. federal judge on Thursday ordered mail facilities in North Carolina and Pennsylvania to conduct sweeps for undelivered mail-in ballots twice daily after the U.S. Postal Service revealed that thousands of ballots postmarked over the weekend were not delivered to local election boards by Election Day.

According to data filed in court, roughly 8,000 to 9,000 ballots were not delivered by Tuesday evening despite being mailed by voters as of Sunday.

U.S. District Judge Emmet G. Sullivan's order was issued in litigation filed by the NAACP and other voter advocacy groups, which claimed that mail delays have hindered Americans' right to vote.

The sweeps are mandated at facilities with later ballot receipt deadlines. Pennsylvania allows ballots postmarked on time that arrive by Nov. 6 to be counted, while North Carolina has extended its receipt deadline to Nov. 12.

In another state with a razor-thin margin, the Trump campaign said Thursday morning it would file a suit in the District of Nevada on behalf of a voter who said she was unable to vote because when she went to the polls, she was told someone had already voted in her name.

Former Director of National Intelligence Ric Grenell was on hand in Nevada to announce the suit in a press conference Thursday morning. He claimed without evidence that illegal mail-in ballots had been cast.

"We were told signatures would save us from all of the fraud, but to date we have not been able to observe these signatures or meaningfully challenge a single mail-in ballot out of hundreds of thousands cast," Grenell said.

A Michigan judge expressed incredulity on Thursday at the Trump campaign's bid to submit evidence of an improperly dated absentee ballot.

The campaign had offered an affidavit from an election inspector stating that an unnamed poll worker had provided information about an absentee ballot that was allegedly delivered the day after the election but backdated as having been delivered the previous day.

"I've looked at this affidavit repeatedly. What I have at best is a hearsay affidavit," said Judge Cynthia Stephens of the Michigan Court of Claims.

The campaign's attorney, Thor Hearne, tried to argue that the inspector had firsthand knowledge of the poll worker's information, but Judge Stephens said she couldn't make a determination of truth based on information from an unknown third party.

"I heard somebody else say something. Tell me why that's not hearsay. Come on now!"

The campaign had filed suit Wednesday seeking to freeze the ballot count and alleging that an absentee counting board had removed a certified election challenger while it tabulated the votes.

But with the votes having already been counted, Judge Stephens said the request was moot and she also found a number of defects in it.

The petition was short on specifics, including when the challenger was removed or why, and evidence was lacking as to whether the named defendant, Secretary of State Jocelyn Benson, should be held liable for the alleged misconduct when she wasn't responsible for the "day-to-day conduct" of the vote count, Judge Stephens said.

"In this instance, where the issue is the day-to-day conduct of the vote count, the individuals who bear that responsibility … lies with the local election officials," she said.

The campaign also pressed the court to release surveillance footage of ballot dropboxes installed after Oct. 1, arguing that the footage fell under Benson's directive for polling access. But Judge Stephens denied that request, saying that meaningful access to vote processing was limited to active polling places.

Michigan state attorney Heather Meingast also argued that the state doesn't keep track of when ballot boxes are created and that election officials don't segregate absentee ballots based on which dropbox they were left in.

A Republican candidate on Thursday withdrew her Pennsylvania federal court challenge to Montgomery County's outreach to voters whose mail-in ballots were defective, noting that a state court will hear a similar claim Friday.

Congressional candidate Kathy Barnette had questioned the suburban Philadelphia county's practice of reaching out to voters whose ballots were rejected for technical deficiencies such as a missing privacy envelope or signature and allowing them to come in person to cast a provisional ballot. But another case, brought in the Commonwealth Court of Pennsylvania, mounted a broader challenge to the state guidance allowing such outreach, and was scheduled for a hearing in Harrisburg.

"Due to the timing of these proceedings and the pendency of a hearing scheduled in the Commonwealth Court of Pennsylvania ... plaintiffs believe that a temporary restraining order in this case will be ineffective in addressing the matters covered in their motion and, therefore, withdraw their motion without prejudice," the motion to withdraw said.

The other case, brought by two other Republican candidates, claimed giving out information about which votes had been tossed out during the pre-canvassing process on Election Day — which allowed counties, candidates or political parties to call those voters and see if they wanted to cast a provisional ballot — violated state law against prematurely releasing "results" from the canvass.

Update: This story has been updated with the deal on vote observers between Philadelphia officials and the Trump administration, as well as the D.C. federal judge's order.