USPS Must Sweep For Mail-In Ballots Twice A Day In NC, Pa.

By Khorri Atkinson
Law360 is providing free access to its coronavirus coverage to make sure all members of the legal community have accurate information in this time of uncertainty and change. Use the form below to sign up for any of our weekly newsletters. Signing up for any of our section newsletters will opt you in to the weekly Coronavirus briefing.


Law360 (November 5, 2020, 4:32 PM EST) -- A D.C. federal judge on Thursday ordered mail facilities in North Carolina and Pennsylvania to conduct sweeps for undelivered ballots twice a day after the U.S. Postal Service submitted data showing thousands of ballots postmarked over the weekend were not delivered to local election boards by Election Day. 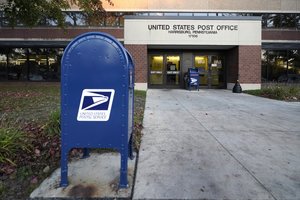 The twice-daily sweeps will take place at facilities serving the states that have a Friday ballot receipt deadline — the last deadline to accept mail-in ballots. According to data filed in court Thursday, USPS delivered about 150,000 ballots nationwide by Wednesday. Of this amount, roughly 8,000 to 9,000 ballots were not delivered by Tuesday evening despite being mailed as of Sunday by voters.

Under the order, plant managers overseeing postal facilities in Greensboro, North Carolina, and mid-Carolinas, as well as Philadelphia and central and western Pennsylvania, must coordinate with all local county boards of elections to deliver ballots postmarked on or before Nov 3. by 5 p.m. local time.

In a separate ruling, all USPS mailing facilities serving states with an extended ballot receipt deadline must, until their respective deadlines pass, carry out ballot sweeps no later than 10 a.m. local time followed by a mid-to-late afternoon ballot sweep to ensure any identified local ballots can be delivered on that day.

After completing a sweep, each facility must report to USPS headquarters the total number of ballots identified and confirm that delivery of those ballots has been expedited to meet the state's deadline.

Starting Thursday, "and until further order of the court, defendants shall promptly submit to plaintiffs a single report with the total number of ballots identified through daily sweeps, with one exception: for facilities that are located in states whose ballot receipt deadline is that day," the order added. "Defendants shall submit the results of those sweeps to plaintiffs immediately following its receipt of the results of the second sweep at these facilities."

Some states accept ballots for up to a week after Election Day, as long as they were postmarked by then. Pennsylvania's extended deadline is Friday. Meanwhile, North Carolina has a Nov. 6 statutory deadline, but the ballot receipt deadline has been extended to Nov. 12.

During a contentious teleconference hearing Wednesday, Judge Sullivan tore into USPS for failing to comply with his Tuesday order, which required special Election Day sweeps for all remaining ballots at more than a dozen facilities across the country. USPS told the judge that it couldn't feasibly carry out the sweeps between 12:30 p.m. and 3 p.m.

Judge Sullivan warned that "someone may have a price to pay for that," and suggested he may order Postmaster General Louis DeJoy to testify under oath about the agency's failure to follow his order.

But for now, time is of the essence and the judge said USPS has to race against the clock to get undelivered ballots turned in to local election boards by their deadline. The judge instructed USPS on Wednesday to deliver outstanding ballots at facilities in Texas by 5 p.m. USPS later told the court that more than 800 ballots were found and delivered to county election officials.

During Thursday's phone hearing, Judge Sullivan did not address whether DeJoy will be called to testify nor how USPS will be held accountable for not complying with Tuesday's directive. But the judge appeared more pleased this time, often lauding career USPS workers for their service.

The U.S. Postal Service is represented by Joseph E. Borson of the U.S. Department of Justice's Civil Division.