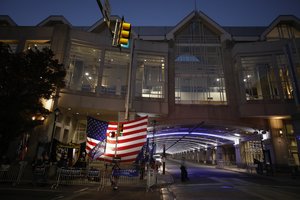 The campaign wants the court to bar state officials from certifying the results of last week's election, alleging that observers were unable to meaningfully observe the canvassing of hundreds of thousands of votes in Philadelphia and Pittsburgh, and to throw out mail-in ballots after voters in primarily Democratic areas were allowed to "cure" procedural defects including missing signatures and security envelopes.

The campaign argues the case could ultimately end in Trump winning Pennsylvania after being declared the loser there on Saturday.

"We are within our rights to look into these irregularities," Trump campaign attorney Matt Morgan said at a press conference on Monday afternoon. "We believe this lawsuit takes us one step closer to closing the vote differential in Pennsylvania."

By being widely recognized Saturday as winning the state, President-elect Joe Biden lined up enough electoral votes to propel him into the White House in January.

The Trump campaign already went to court in Philadelphia last week arguing that watchers were kept too far away from where mail-in ballots were being counted at the city's convention center in order to "meaningfully observe" the process.

A trial judge initially rejected the campaign's claim on grounds that the state's Election Code only allowed watchers to be present "in the room" and made no provision for "meaningful observation," but a state appellate judge agreed to allow watchers to move within six feet of the counting operation on Thursday.

The Pennsylvania Supreme Court agreed to hear the dispute on Monday afternoon.

In the federal complaint on Monday, however, the Trump campaign casts the issue as a violation of equal protection rights as it contends that it was only observers in Philadelphia and Allegheny County — heavily Democratic areas — who had been kept too far away from the canvassing operations.

"Defendants created a system whereby it was physically impossible for the candidates and political parties to view the ballots and verify that illegally cast ballots were not opened and counted," the complaint alleges.

Between Allegheny County and Philadelphia, the complaint contends there were about 680,000 ballots that had been canvassed without proper observation.

The complaint also pointed to efforts by some counties to allow voters to cure mail-in ballots that were sent in with clear problems, including missing signatures or secrecy envelopes, either through correcting the ballots or by canceling them and voting provisionally.

Similar claims are pending as part of a pair of lawsuits in federal court in Philadelphia and in the state's Commonwealth Court, where counties were ordered on Friday to segregate any such provisional ballots until a ruling could be made.

In the lawsuit on Monday, however, the Trump campaign says that guidance from the state's Department of State authorizing counties to reach out to voters who had submitted clearly deficient ballots was not explicitly authorized under Pennsylvania law and thus was a violation of constitutional provisions giving state legislatures authority to set rules for the conduct of elections.

The complaint also alleges that voters in Republican-heavy counties did not have the same opportunity to cure potentially deficient mail-in ballots as those in certain Democrat-heavy counties that opted to allow for curing.

In a message on Twitter, Pennsylvania Attorney General Josh Shapiro brushed off the lawsuit as "the latest meritless lawsuit to challenge [Pennsylvania's] election, which was overseen by bipartisan officials and was lawful, fair and secure."

"For months, the majority of these lawsuits have been dismissed and found to have no merit by courts at all levels, and this one is no different," he said.

Representatives for election boards in Philadelphia and Allegheny counties did not immediately return messages seeking comment.

The case has been assigned to U.S. District Judge Matthew Brann, according to court records.

The Trump campaign is represented by Ronald Hicks Jr. and Carolyn McGee of Porter Wright Morris & Arthur LLP and Linda Kerns of the Law Offices of Linda A. Kerns LLC.

Counsel information for the defendants was not immediately available.