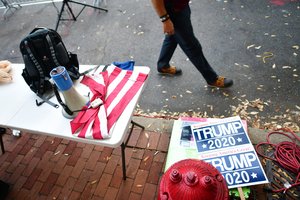 A Trump supporter walks past campaign signs while demonstrating Tuesday outside of where votes were still being counted in Philadelphia. (Mark Makela/Getty Images)

The move late Thursday left Trump's campaign with only a single attorney — Philadelphia-based solo practitioner Linda Kerns — as counsel on the sweeping legal challenge, which aims to stop the state from certifying the results of its election after former Vice President Joe Biden was declared the winner there last weekend.

"Plaintiffs and Porter Wright have reached a mutual agreement that plaintiffs will be best served if Porter Wright withdraws, and current co-counsel and such other counsel as plaintiffs may choose to engage represent plaintiffs in this case," the firm said in a court filing announcing its withdrawal from the case.

Trump campaign spokesman Tim Murtaugh blamed the withdrawal on "cancel culture" and vowed to move forward with the case.

"Cancel culture has finally reached the courtroom," he said in a statement. "Leftist mobs descended upon some of the lawyers representing the president's campaign and they buckled. If the target were anyone but Donald Trump, the media would be screaming about injustice and the fundamental right to legal representation. The president's team is undeterred and will move forward with rock-solid attorneys to ensure free and fair elections for all Americans."

As of Friday afternoon, Kerns asked the court to grant special admission to allow John Scott, a litigator with the Texas-based boutique Scott PLLC, to join the case on behalf of the Trump campaign.

Neither Kerns nor Scott nor a spokesperson for Porter Wright immediately returned messages seeking comment Friday.

Porter Wright has represented the Trump campaign in at least nine cases in Pennsylvania in recent months challenging various aspects of the state's electoral mechanisms, from the use of drop boxes for mail-in ballots, to the need for canvassers to match signatures on ballots and voter rolls, to the ability of campaign operatives to oversee vote-counting.

Porter Wright and other firms representing the Trump campaign in various legal challenges across the country over the outcome of last week's election have been facing increasing criticism for their ongoing work on behalf of the president's ill-fated reelection bid.

The firms, including Jones Day and Snell & Wilmer LLP, have been the target of social media posts from members of the legal community, public interest groups and others urging potential clients to boycott the firms.

While Jones Day has faced criticism over its work, the firm has clarified that its attorneys are not representing Trump, his campaign or any affiliated party in litigation alleging voter fraud.

Hearings in the case in Pennsylvania are scheduled to be held next week in Williamsport.

The Trump campaign is represented by Linda Kerns of the Law Offices of Linda A. Kerns LLC.

The commonwealth is represented by Daniel T Donovan, Susan M. Davies and Michael A. Glick of Kirkland & Ellis LLP, and Daniel T. Brier, Donna A. Walsh and John B. Dempsey of Myers Brier & Kelly LLP.

Update: This story has been updated to include a statement from the Trump campaign.