Law360 (November 25, 2020, 12:18 PM EST) -- A Pennsylvania judge on Wednesday ordered the state to temporarily pause further action on certifying its 2020 election results until her court holds a hearing on a lawsuit seeking to declare all mail-in votes in the Keystone State unconstitutional, but the state immediately appealed. 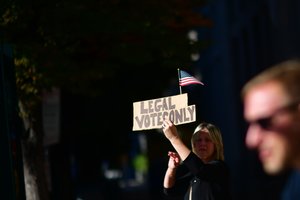 A President Donald Trump supporter holds a sign while demonstrating on Nov. 10. A Pennsylvania judge on Wednesday ordered the state to halt any further steps toward finalizing the results of the 2020 general election while the court hears a suit seeking to declare all mail-in ballots in the state unconstitutional. (Photo by Mark Makela/Getty Images)

"To the extent that there remains any further action to perfect the certification of the results of the 2020 general election ... for the offices of president and vice president of the United States of America, respondents are preliminarily enjoined from doing so, pending an evidentiary hearing," the judge's order said. "Inasmuch as respondents, based on their press release and briefs, have not undertaken certification of any of the other results of the election, respondents are preliminarily enjoined from certifying the remaining results of the election, pending the evidentiary hearing."

After pledging that the order would not change Pennsylvania's 20 electoral votes for Biden, Attorney General Josh Shapiro filed an appeal to the state Supreme Court on Wednesday afternoon, asking the justices to exercise their extraordinary jurisdiction powers to take up the case and determine if Judge McCullough erred in granting the temporary injunction.

The hearing, which had been scheduled for Friday morning, was postponed because of the appeal, Judge McCullough noted in another order Wednesday evening.

"Since the birth of our nation nearly 250 years ago, no court has ever issued an order purporting to interfere with a state's ascertainment of its presidential electors — until today," the state's application for extraordinary jurisdiction said. "The Commonwealth Court's order threatens to disrupt the certification of every race in the 2020 general election; foreclose the seating of elected representatives; indefinitely postpone the December 1 start of the General Assembly's term; undermine the will of the voters; and cast a wholly unwarranted cloud over Pennsylvania's election results."

Granting the relief the challengers asked for risked missing the Dec. 1 deadline to certify votes for down-ballot posts, including the entire Pennsylvania House of Representatives and part of the state Senate, the state argued.

Attorneys for the state and the Republican-majority legislature that had passed the expanded voting bill argued in briefs that the challengers' request to halt certification was too late and they lacked any particularized harm to give them standing to sue. But the challengers filed a supplemental application for emergency relief late Tuesday night that laid out other steps in formalizing the election that the court could stop, up to and including an injunction stopping electors from meeting in Harrisburg in December.

"Should it be absolutely necessary, in order for this court to be empowered to provide adequate relief, petitioners may seek for leave from this court to join the slate of presidential and vice presidential electors as additional respondents in this action, and move to enjoin them from taking certain action," the petition said. "Because the electors, by law, must perform their duties at the 'seat of government of this Commonwealth,' this court may also enjoin respondents from permitting the electors to assemble at such location."

The lawsuit seeks to declare the expansion of mail-in voting unconstitutional and to void those ballots cast in the 2020 election, or to have the state's legislature choose who won Pennsylvania. President Donald Trump's election-day advantage in the state had flipped to an 80,000-vote advantage for Biden as mail-in votes were counted.

"We commend the Commonwealth Court and Judge Patricia McCullough for today's order granting emergency relief … until the court has the opportunity to consider granting further relief from unconstitutional universal mail-in balloting," Gregory Teufel of OGC Law, representing the challengers, told Law360 on Wednesday.

Gov. Tom Wolf and Secretary of the Commonwealth Kathy Boockvar certified the state's presidential election results Tuesday and submitted them to the Archivist of the United States, which led them to argue the case was now moot.

But the challengers pointed to other steps and deadlines in the formal process of finalizing the votes for president and other offices in their supplement and suggested the state's certification on the day after counties' deadline to report their votes was done to head off the lawsuit's effort to stop the process.

"Respondents assert only that certain actions with regard to the finalization of the presidential and vice presidential election results have taken place — i.e., the tabulation of the returns, and the signing of the certification submitted to the Archivist," the supplement said. "While respondents may have proactively attempted to avoid potential injunctive relief granted by this court, respondents' duties with regard to finalization of the full election results are far from complete."

In election litigation so far this year, Commonwealth Court judges have given Republicans and Trump a few significant wins, but those rulings have mostly been reversed on appeal to the Supreme Court of Pennsylvania.

Attorneys for the General Assembly did not immediately respond to requests for comment.

The plaintiffs are represented by Gregory Teufel of OGC Law LLC and Brandon M. Shields of Gabriel & Shields.

Update: This article has been updated with additional developments and with comments from counsel for the challengers.