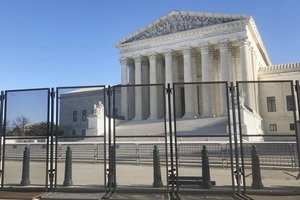 The majority gave little explanation for granting the FDA's request to reinstate the requirement, which a Maryland federal judge temporarily blocked in July after doctors argued in a suit that in-person visits posed unreasonable risks of contracting COVID-19.

Tuesday's ruling, formally a stay of the July injunction, was unsigned. The high court's three liberals said they would have rejected the FDA's request, and of the six conservatives, only Chief Justice John Roberts supplied a rationale.

"My view is that courts owe significant deference to the politically accountable entities with the background, competence and expertise to assess public health," Justice Roberts wrote.

Justice Sonia Sotomayor, in a dissent joined by Justice Elena Kagan, agreed that such deference would normally make sense. But she wrote that the government hasn't explained why abortion-inducing medication is the only drug that must be obtained in person during the coronavirus crisis even though it can be prescribed via telemedicine.

"There simply is no reasoned decision here to which this court can defer," Justice Sotomayor wrote.

The requirement that women make in-person visits to obtain the drug — mifepristone — was enacted in 2000. It's the only one of 20,000 FDA-approved drugs that require such visits but can nonetheless be ingested anywhere without medical supervision, according to court filings.

A small number of other drugs usually must be obtained and ingested at a medical site, but in-person requirements for those drugs — including narcotic painkillers — have been waived during the pandemic.

Eva Chalas, president of the American College of Obstetricians and Gynecologists, which sued to suspend the in-person requirement, said in a Tuesday statement that her group is "deeply disappointed that our members and their patients will now be faced with an unnecessary increase in risk of exposure to COVID-19 as the virus rages across the country."

The FDA has said in court filings that mifepristone "carries serious risks for up to seven percent of patients, including bleeding requiring surgical intervention," and that requiring in-person dispensing and risk disclosure improves safety.

But Justice Sotomayor on Tuesday said that the agency "has not identified a single harm experienced by women who have obtained mifepristone by mail or delivery" since the district judge blocked the in-person policy six months ago.

In her dissent, Justice Sotomayor also seemed to raise the prospect of the Biden administration pausing the in-person requirement, although she didn't explicitly name President-elect Joe Biden.

"One can only hope that the government will reconsider and exhibit greater care and empathy for women seeking some measure of control over their health and reproductive lives in these unsettling times," her dissent said.

Biden's transition team did not immediately respond to a request for comment on Tuesday evening.

Mifepristone is used with another drug, misoprostol, during the first 10 weeks of pregnancy to essentially induce a miscarriage. After the 10-week mark, abortions are typically performed surgically.

The Supreme Court in October punted a decision in the case and gave the FDA a chance to argue in district court that the circumstances of the pandemic had changed. But last month, U.S. District Judge Theodore Chuang found that "the COVID-19 pandemic continues to pose a significant health risk necessitating the preliminary injunction."

Justice Sotomayor cited those circumstances on Tuesday, writing that "although the COVID-19 pandemic has only worsened since October, the court now grants the government's request."

FDA representatives had no immediate comment on Tuesday night.

The American College of Obstetricians and Gynecologists is represented by the American Civil Liberties Union Foundation and Arnold & Porter.

The FDA is represented by the U.S. Department of Justice's Civil Division.

The case is U.S. Food and Drug Administration et al. v. American College of Obstetricians and Gynecologists et al., case number 20A34, before the Supreme Court of the United States.