How COVID Has Affected Policing And Incarceration 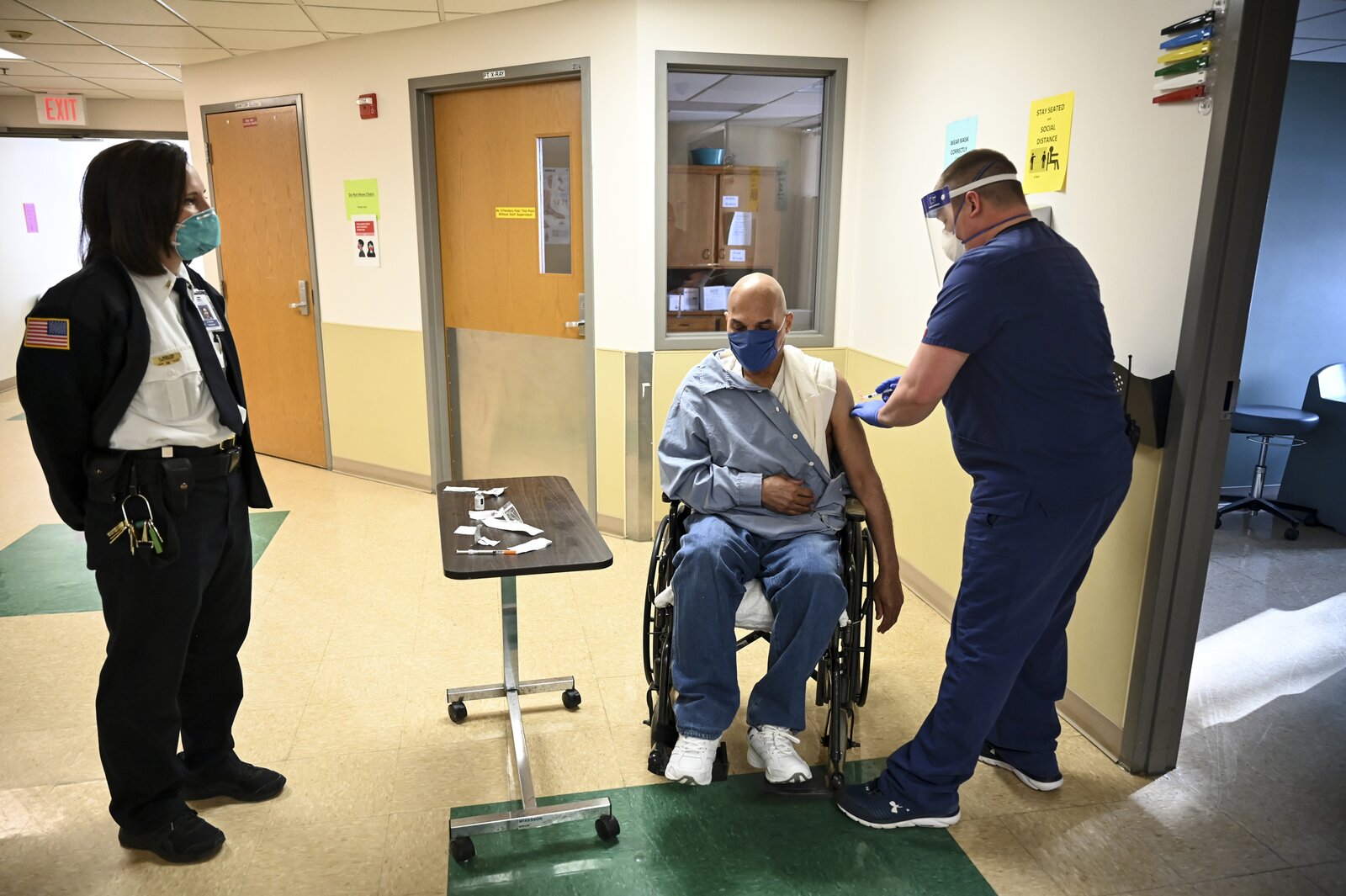 Even though virus-related death tolls were twice as high as in prisons and jails as the general public, fewer than half of states prioritized prisoners with other people living in congregated settings for COVID-19 vaccines. (Aaron Lavinsky/Star Tribune via AP)

Prisons and jails are hot spots for virus outbreaks, with virus-related death tolls twice as high as among the general public, according to criminal justice experts. In response to those virus outbreaks, officials last year changed policing practices to send fewer people to jails and stopped transfers of inmates from jails to prisons.

"We can incarcerate less and be just as safe," said Insha Rahman, vice president of advocacy and partnerships at the Vera Institute of Justice, a nonprofit research and policy organization that works with the government to improve justice systems.

Health and Safety of Prisoners

According to a December report from the Council on Criminal Justice's National Commission on COVID-19 and Criminal Justice, prisons had almost four times as many confirmed coronavirus cases and twice as many deaths per capita as the general public.

Death rates were higher among the incarcerated because jails and prisons are largely overcrowded, unsanitary and lacking adequate medical care. And many prisoners in many facilities didn't have access to hand sanitizer, masks or gloves.

Editor's Note: This article is the second of a two-part series examining the pandemic's effect on the justice system, including courts, communities, law enforcement, and jails and prisons. Click here to read the first article.

Advocates urged state and local government officials to prioritize people in prisons and jails along with people living in congregated settings for COVID-19 vaccines to reduce virus outbreaks and deaths, but fewer than half of states prioritized prisoners for the vaccines, according Lauren-Brooke Eisen, program director for at Brennan Center for Justice.

Rahman said that one thing that can be learned from prison death tolls is that a public health crisis can't be managed with the way U.S. prisons and jails are set up.

The CCJ recommended in its report that the criminal justice system be improved for public health crises by authorizing more emergency releases of medically vulnerable people and diverting people who have mental health or drug abuse problems to treatment programs.

Eisen said that government officials don't tend to think about jails and prisons when they are preparing for public health crises because doctors and medical staff at prisons and jails often don't have a seat at the table when states, cities or counties are doing emergency preparedness.

"Hopefully, this pandemic will have shed some light on ... the devastating conditions people in our jails and prisons are living in every single day," Eisen said.

During the pandemic, the number of people behind bars has decreased because of fewer arrests for misdemeanor crimes, suspension of jail to prison transfers and inmates being released early or under supervision to reduce overcrowding that was contributing to virus outbreaks in facilities.


According to the CCJ's report, prison populations were reduced 5% nationally in 2020.

However, advocates say that more inmates should have been released and that government officials didn't do enough.

In April, the Brennan Center wrote to governors in all 50 states urging them to use their clemency authority to reduce sentences so that inmates could be released early from prison and to work with prosecutors so that more people who had been convicted but not yet sentenced wouldn't be sent to prison during the pandemic.

Eisen said that only a few governors such as Phil Murphy of New Jersey and Gavin Newsom of California issued orders to reduce incarceration populations in their states.

Almost 40% of people in our state and federal prisons don't need to be there for public safety because they either shouldn't have been imprisoned or have been in prison too long, according to Eisen.

"Our sentences are disproportionately long when you look at other democracies across the world," Eisen said.

Rahman also said that early releases have disproportionately benefited white prisoners because prosecutors have broad discretion when deciding who gets released early and can be biased against Black and brown people when determining who isn't a threat.

The pandemic has caused law enforcement officers to change how they policed their communities. For example, officers made fewer misdemeanor arrests, issuing citations instead.

According to the Brennan Center, officials in states including Montana, Wisconsin and Texas adopted cite-and-release policies for some low-level offenses to decrease jail populations.

In Kentucky, as a result of changes to policing practices amid the pandemic, arrests dropped from 700 to 150 per day, according to the Kentucky Administrative Office of the Courts.

Rahman said that the reduction in arrests for misdemeanor crimes was a positive way the pandemic has affected policing.

"We saw that we don't need to police as much as we do, we can police far less and communities will be just fine," Rahman said, adding that the billions of dollars spent on law enforcement each year could instead go to community-based violence prevention programs.

However, changes in policing also may have led to more violent crimes.

According to a 2020 end-of-year crime report from the CCJ's National Commission on COVID-19 and Criminal Justice, homicide rates were 30% higher than in 2019 based on data from 34 cities, though still at a historical low.

Criminal justice experts say that the increase in violent crimes wasn't related to fewer people in jail or fewer arrests for misdemeanors.

According to the CCJ's report, strained police resources during the pandemic have restricted law enforcement's ability to take crime prevention actions.

Len Engel, director of policy and campaigns at the Crime and Justice Institute, said law enforcement officers in some areas stopped all gang suppression activities to avoid person-to-person conduct.

"Street workers go into communities and homes and into businesses to connect with people who are in this environment to talk them away from using violence as a response," he said.

In addition, some jurisdictions pulled back their policing in response to summer protests over police brutality, according to CCJ's report.

"We are in a period of extraordinary, unprecedented strife and trauma," Buskey said, adding that the pandemic has caused "one of the worst economic collapses in our history."

"The right response would have been to figure out how to do the violence interruption and grief counseling, managing trauma, managing boredom, managing despair through social distanced meetings," she said.