The person who succeeds Cyrus R. Vance Jr. as the Manhattan district attorney on Jan. 1 will need to gain the trust of an Asian American community rocked by a surge in hate-motivated violence against its members and the perception that their trauma is not being recognized or addressed by law enforcement and the justice system. 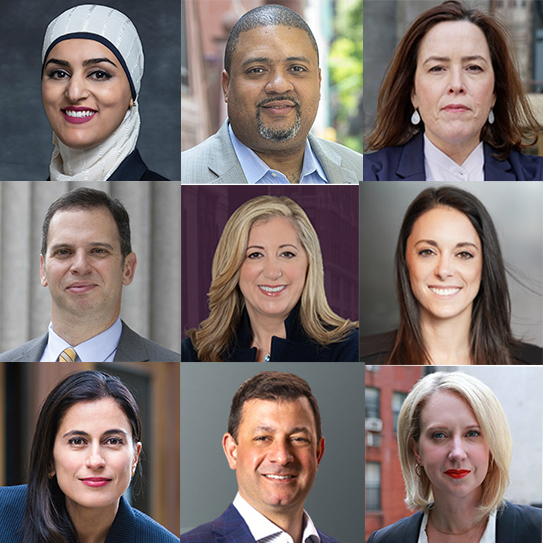 At a forum hosted by the Asian American Bar Association of New York last week in the runup to the primary election, seven Democratic candidates and one Republican tried to strike a balance between deterrence and overkill. In doing so, they diverged on how to use prosecutorial power to stave off attacks on people of Asian descent, which have been on the rise since the pandemic began.

Hate crime laws in New York allow prosecutors to upgrade misdemeanors to felonies. They can also charge first-degree aggravated harassment, which is itself a felony. Most of the candidates pledged to use enhanced charges that carry prison time for perpetrators of hate crimes.

Lucy Lang and Diana Florence, both former prosecutors in the Manhattan District Attorney's Office, and Tali Farhadian Weinstein, a former federal prosecutor, said they would use the enhancements.

"That's what hate crime enhancements exist for," Lang said. "Hate crimes should be treated more seriously than other kinds of crimes."

Florence, who has worked for over 20 years at the office she now seeks to lead, said prosecutors should use the "full brunt of the law" to deter hate crimes.

"Many of my colleagues in this race think that prison should never be used again," she said. "I'm not about over-criminalizing, but we need to use it as a deterrent."

Farhadian Weinstein, who is leading in polls, said the rise in hate crimes demands a "forceful response."

"People have these do-not-prosecute lists that include things like harassment in the second degree, like shoving or pushing," she said. "We have to call that out and treat it differently."

Alvin Bragg, another leader in the race, proposed a more nuanced policy. He would use enhancements in the most serious cases, but not in misdemeanor cases that don't involve violence.

"My view on incarceration, generally, is that it should be saved for harm, in a sort of physical sense, or large pecuniary loss," said Bragg, a former deputy New York attorney general and now co-director of the Racial Justice Project at New York Law School.

Bragg said prosecutors tend to overcharge defendants in most circumstances. In cases of bias-motivated attacks, however, it's the opposite. He said he would look at the underlying facts of each case and determine whether upgrading charges is appropriate.

"I wouldn't feel it incumbent upon me to add the enhancement," Bragg said.

In a report on anti-Asian violence published in February, AABANY urged police and prosecutors to create fully staffed units dedicated to fight hate crimes. The group also urged the district attorney's office, which is seeing its first leadership change in 12 years, to consider using the enhancements provided by the law more often.

Prosecuting hate crimes can be challenging. To charge a hate crime, state law requires manifest bias in a perpetrator's speech, such as the utterance of a racial slur, or other proof of bias. Lacking the evidence, prosecutors often file lower charges.

Lang said she would rely more heavily on an existing cyber crimes unit to investigate possible racial motives. Farhadian Weinstein, who was part of the New York State Bar Association's task force on hate crime last year, said investigating biases require a specially trained workforce looking into possible patterns — things a perpetrator might have done or said in the past, social media feeds, or other contextual factors — and that's when a dedicated unit would prove useful. Most candidates support creating such a unit.

"We need to have specialized prosecutors and specialized investigators to do that work," she said.

Another hurdle is that hate crimes go largely unreported, particularly against Asian Americans who may face language barriers and a general distrust of law enforcement, sometimes for reasons related to immigration status. According to data from the New York Police Department, there were 237 cases of hate crime reported in the 10 months beginning in January 2020. Reporting has become more efficient in recent months, members of the attorney group said, but prosecutions of hate crimes are still rare.

Numerous violent anti-Asian attacks in recent months were perpetrated by people with mental illnesses who were often homeless. The victims are overwhelmingly elderly and female. That has become a thorny issue for candidates, particularly those touting progressive agendas, who have pledged to stop prosecuting crimes related to poverty.

Most of the contenders for the office have said throughout their campaigns that they intend to invest in alternatives to incarceration to reduce the jail population and save tax dollars. Providing medical assistance and housing to people with mental health issues or who are homeless or have drug addiction is more effective in tackling crime because they address the root of it, they say.

Yet to Asian Americans in a community on edge amid a rise in violence that appears to be driven by ethnic bias, the move toward reform might be ill-timed.

"There's so much pain and trauma in the Asian community right now," Jennifer X. Luo of Sher Tremonte LLP, a member of ABBANY's issues committee, asked the candidates. "What do you say to them? Are you just going to say, 'I'm going to focus on education'?"

Eliza Orlins, who is running on one of the most left-leaning platforms and is the only public defender in the race, replied that the law can only go so far in deterring hate crimes. Deep-seated racism, which fuels such attacks, cannot be solved by threatening people with prison time, she said.

"We've seen hate crime legislation get passed after certain instances, and it has actually not done anything to substantially, or even at all, deter hate crimes," she said.

Dan Quart, a New York State Assembly member representing Manhattan's East Side who did not take part in the forum, has said he doesn't believe harsher punishment will deliver justice, including in hate crimes.

"We know that the longer sentences that these charges carry do not have any public safety benefit and come at a high cost to the taxpayer," Quart told Law360 in an email last week. "As district attorney, I would not upgrade charges in these cases."

Orlins has pledged to cut the budget of the district attorney's office in half. Tahanie Aboushi, a civil rights attorney at Aboushi Law Firm PLLC who is also running a progressive campaign, said she would do the same. Their argument is that by declining to prosecute most misdemeanors, the office will free up resources to dedicate to more serious crimes, including hate crimes that involve violence.

"There are underlying charges that won't necessarily trigger the enhancements but that can accomplish that accountability that some communities might be looking for," Aboushi said.

AABANY has not endorsed any candidate.

The New York City Bar Association announced Monday afternoon that it gave Orlins and Aboushi a "not approved" rating and assigned an "approved" rating to the other candidates. In a statement accompanying the ratings, the city bar said "candidates rated approved have affirmatively demonstrated qualifications necessary for the performance of the duties of the position for which they are being considered."

Although the law permits enhancing charges where there is evidence of bias, most hate crime defendants are charged with second-degree aggravated harassment, a misdemeanor that is not bail eligible and is unlikely to be punished with prison time, the panelists said.

Orlins and Aboushi said they wouldn't prosecute most misdemeanors. Bragg, Quart and, to a lesser extent, Lang and Florence have also included do-not-prosecute lists in their platforms, although without committing to sharp budget reductions.

Most anti-Asian attacks, from threatening, shoving or spitting to more physical aggressions, fall within the misdemeanor category. This fact could steer voters toward candidates with hard-line approaches who have been consistent in calling out the surge in violent crime across the city as, in part, a failure by police and prosecutors to ensure safety.

"This is where the people who don't take misdemeanor prosecution seriously get in trouble," Farhadian Weinstein said.

Liz Crotty, a prosecutor under former Manhattan District Attorney Robert Morgenthau and now a defense attorney at her own firm, Crotty Saland PC, and Thomas Kenniff, the only Republican in the race, are running more traditional crime-focused campaigns overall, calling for the reinstatement of a controversial NYPD anti-crime unit they said was effective in taking guns off the street. They also criticized other candidates for ruling out prosecuting certain types of crimes.

On the issue of hate crimes, both Crotty and Kenniff showed less urgency than their opponents, saying they would make the creation of a fully-staffed hate crime bureau contingent on the number of hate crimes reports. So far, the number has been low, they said.

"I'd be open to it if the numbers go up," Crotty said. "I think what we have to do too is, really, be working with the police and how we report hate crimes."

Crotty said she would use restorative justice practices when possible, and charge offenses that carry prison time when necessary.

A bail reform that took effect last year adds a level of complication to conversations about how to effectively tackle hate crimes.

Some of the most egregious anti-Asian attacks, such as one involving a man who shoved, kicked and stomped a 65-year-old woman to the ground and told her she didn't belong here, have been charged as felonies, which allowed judges to remand suspects or require bail. Most misdemeanors, however, including some involving violence, are no longer eligible for detention.

Quart, Orlins and Aboushi said they support the elimination of bail, which they say further criminalizes poverty.

"I don't believe connecting one's freedom to their wealth is moral," Quart said. "If a crime committed is so heinous that an individual should be held in jail, I would seek remand, not bail."