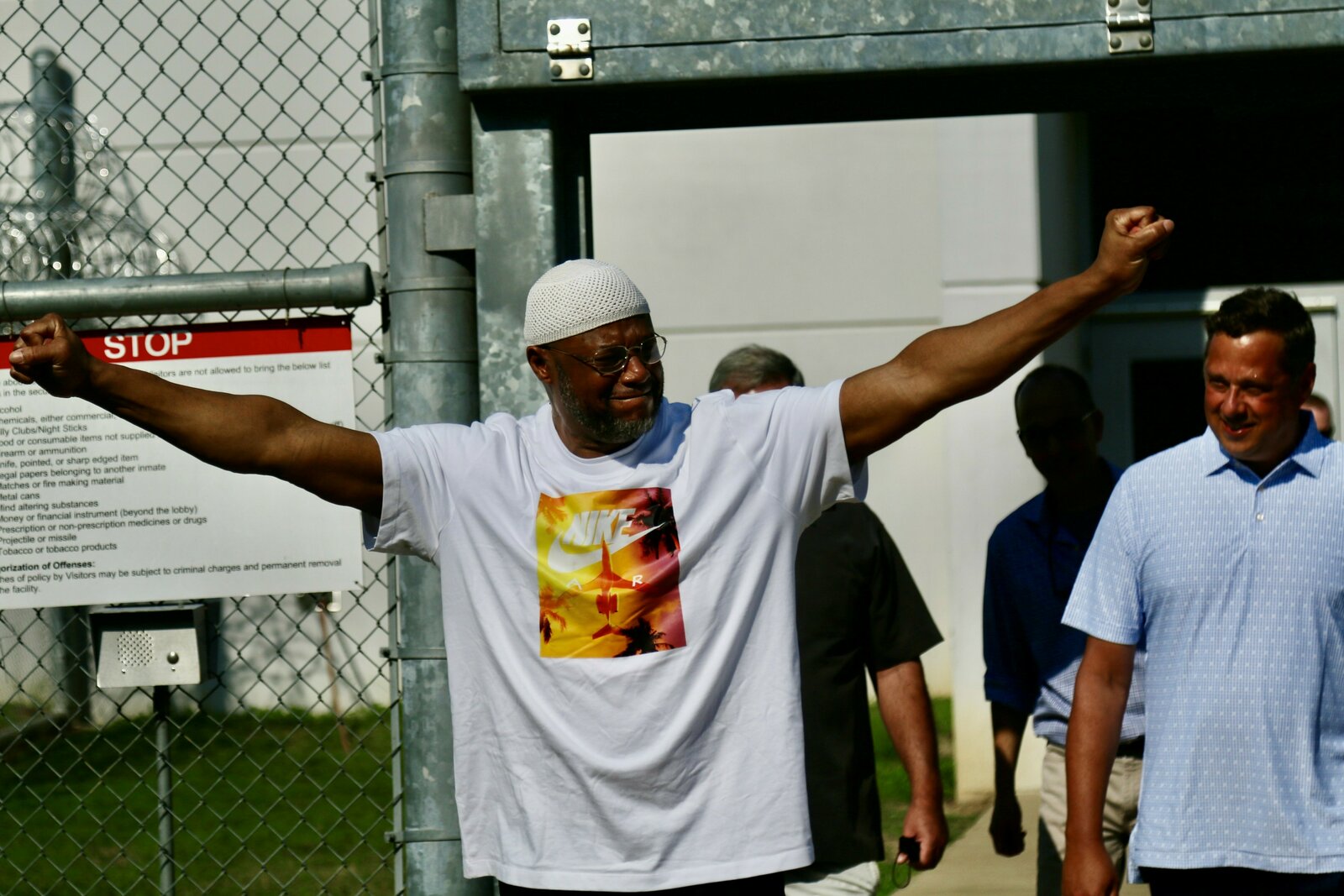 Sherwood Brown exits the DeSoto County Adult Detention Facility in Hernando, Mississippi, after 28 years in custody for a crime he didn't commit.


In January 1993, a brutal triple homicide shocked a small Mississippi community: A 13-year-old girl, Evangela Boyd, found dead in her home, her naked body lying on the floor of the laundry room. Her mom, Verline Boyd, and her grandmother, Betty Boyd, found lifeless in other areas of the house, which was ransacked. All of them died of chop wounds to the head made with a blade, possibly an ax or a machete.

The killings took place in Eudora, Mississippi, a small unincorporated community about 25 miles south of Memphis. Two years later, a local man, Sherwood Brown, then 25, was convicted of the heinous murders at trial. His sentence was death.

More than a quarter-century later, Brown, now 53, walked free after exculpating DNA evidence cast serious doubts on his conviction, and the Mississippi Supreme Court decided to vacate his conviction and sentence, paving the way for his release on Aug. 24.

More than 25 attorneys with Fish & Richardson PC, an intellectual property law firm, helped Brown in his long quest for freedom.

"We are extremely thankful to see Sherwood walk out of prison a free man, following decades of suffering and injustice," John R. Lane, the firm's principal, said in a statement upon Brown's release. "After all of this time, we never lost hope, and are gratified justice has finally been served."

Odds were stacked against Brown, a Black, poor, 10th grade dropout sitting on death row. Speaking to Law360, Lane said he came to his help out of compassion.

The State's Case Against Brown

Detectives found partial bloody shoe prints inside the victims' home and front yard, and later found a similar mark in Brown's driveway — he lived close by. Brown, who had two felonies on his record, became a main suspect.

After he was arrested, investigators said a pair of Brown's shoes resembled the shoe prints at the crime scene. A lab test conducted by the Federal Bureau of Investigation concluded it was "possible" the sole of Brown's left shoe contained traces of blood, according to court documents. That became the centerpiece of the state prosecutors' case.

A cut on Brown's wrist also became a crucial element in the case against him. He said he had gotten it while working, possibly handling rebar, but prosecutors argued it was a bite mark from the youngest victim, and used two expert testimonies to support the theory.

Dr. Michael West, one of the state's experts, advanced the narrative that the cut on Brown's left wrist was a bite mark from Evangela Boyd fighting for her life.

By the time he submitted his testimony in the case in the early 1990s, West had achieved notoriety for his use of so-called forensic odontology — bite-mark analysis used in criminal investigations — that has since been discredited.

Several of West's testimonies at trials were later disproved by DNA testing. The role the doctor played in helping convict innocent people became the subject of a popular Netflix documentary, "The Innocence Files," which chronicled a series of wrongful convictions.

West could not be reached for comment. In a 2011 deposition obtained by The Clarion-Ledger, Mississippi's newspaper of record, West distanced himself from the field of forensic odontology.

"I no longer believe in bite-mark analysis. I don't think it should be used in court. I think you should use DNA. Throw bite marks out," he reportedly said.

West was not available to testify at Brown's trial because he was on the stand in another county providing testimony, also about bite-mark matching, at the murder trial of Kennedy Brewer, another defendant who was wrongfully convicted, then exonerated in 2008 following DNA testing.

Another forensic odontologist, Dr. Harry Mincer, ended up testifying at Brown's trial, reaching the same conclusion: Boyd had left the mark on Brown's arm in a last attempt to survive the attack. A former president of the American Board of Forensic Odontology, Mincer died earlier this month at age 89.

A third element in the prosecution was the testimony of an acquaintance who alleged Brown had confessed having raped the girl. That testimony was shaky, at best, Lane said. The acquaintance, also a convicted felon, had admitted during the trial that he had committed perjury.

"I mean, this guy was just a mess, and he had been given a sweetheart deal in another case to testify in Sherwood's case," Lane said. "He was just bad all the way around."

When Lane began working on Brown's case in 2009, Fish & Richardson had already been representing him pro bono for several years.

Lane became the coordinator of Brown's defense team, which by then had been joined by other pro bono attorneys, including Garland T. Stephens of Weil Gotshal & Manges LLP, J. Douglas Minor Jr. of Bradley Arant Boult Cummings LLP, and W. Tucker Carrington of the George C. Cochran Innocence Project at the University of Mississippi School of Law, who represents people who claim they were wrongfully convicted by the state. 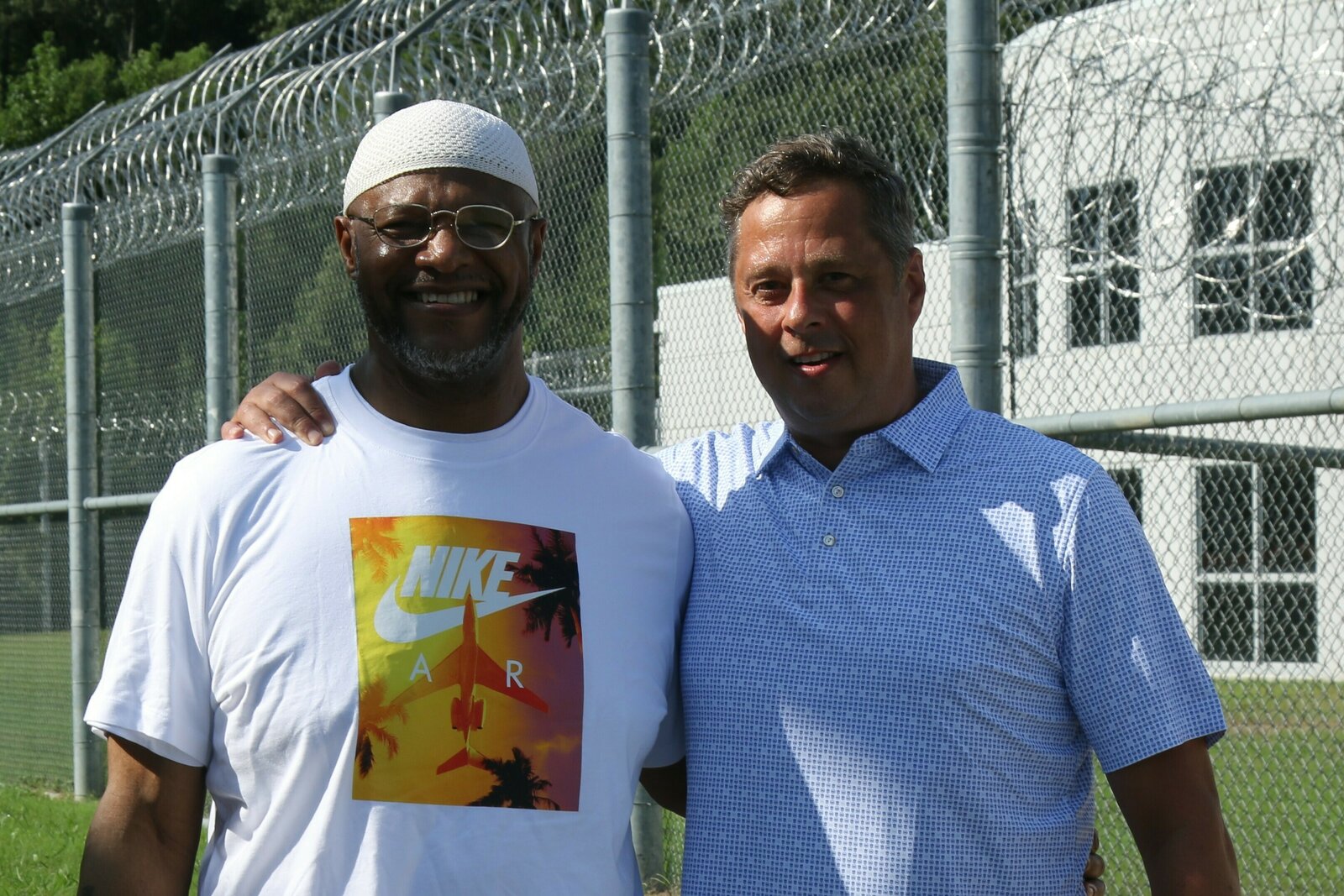 Sherwood Brown and John R. Lane of Fish & Richardson PC on Aug. 24, 2021, the day Brown was released from custody. Brown spent 28 years behind bars in Mississippi, 22 of which were on death row. DNA evidence exculpated Brown from a triple murder for which he was convicted.


Brown's attorneys first tried unsuccessfully to get Brown off death row in virtue of the U.S. Supreme Court's 2002 decision in Atkins v. Virginia

, which held that executing people who are mentally disable violates the Eighth Amendment's prohibition on cruel and unusual punishments. The lawyers pointed to Brown's low IQ in support of their argument, but the court rejected it.

But later, the attorneys began believing that Brown, who had continued to profess his innocence, could have been wrongfully convicted.

"As we started working with him, he just kept telling us, 'I'm innocent, I didn't do these crimes,'" Lane said.

A prolonged legal battle ensued on which laboratory would do it. Brown's attorneys wanted Forensic Analytical Sciences Inc., a well known DNA forensic testing company based in California that was also employed in the case against O.J. Simpson, to carry out the testing. The state countered the company was biased, and advocated for a different lab.

"We had to go to the court and work that out," Lane said. A county judge ultimately ordered that both labs perform the DNA test.

No trace of Brown's DNA was ultimately found in scrapings from the teenage victim's fingernails, after a series of tests conducted in 2014 and in 2015. A test of the bloodied footprints found at the scene revealed only traces of female blood, while only male blood was found on Brown's shoe sole.

"That blew apart the state's theory that Sherwood would have left the shoe prints," Lane said.

Samples of saliva and blood found in the girl's mouth, as well as her pubic hair and samples from her bra were also tested, returning no match for Brown, only showing presence of the DNA of other men who were never identified.

"It turned out she probably did bite the perpetrator, but it wasn't Sherwood," Lane said.

By the time DNA test results put him out of the crime scene, Brown had already been in prison for two decades. He spent most of them at the Mississippi State Penitentiary, more commonly known as Parchman, where the death chamber is located. The prison has gained notoriety throughout the decades for the violence carried out within it.

In January 2017, Lane filed a motion with Mississippi's high court to vacate Brown's conviction based on the DNA testing results and the false testimony provided at his trial. In October the same year, the state's Supreme Court vacated the conviction outright,

"The relief afforded herein is extraordinary and extremely rare," the court's judges said in an en banc order.

The court's decision, however, wasn't the end of Brown's time in prison. He was taken off death row and put into a DeSoto County jail. Now he had to fight the indictment against him, which remained active. And the state of Mississippi was intent on retrying him.

The DeSoto prosecutor on the case recused himself, and so did the judge initially assigned to it.

"We had to go through this sort of wrangling to get a new prosecutor and a new judge," Lane said.

The new prosecutor wanted to retry Brown and seek the death penalty again. He made plans for new DNA testing on the evidence.

"We were like, 'Are you serious? Come on man — two laboratories have already tested it,'" Lane recalled. The court allowed the additional testing and other investigation in the case, which took about three years, from 2018 to 2021. Four laboratories tested the evidence, again returning no matches for Brown.

"Every time, there was nothing incriminating Sherwood," Lane said. "The state was trying to find something to incriminate Sherwood, but every time they did, it kind of stumped them deeper."

At that point, the prosecutor, Benjamin F. Creekmore, dismissed the case. A county judge signed a brief order declaring the state had no intent on prosecuting Brown, finally allowing him to go free. Brown walked out of the DeSoto County jail on Aug. 24.

Creekmore did not return a request for comment on the case.

Lane and his co-counsel traveled to Mississippi to meet Brown immediately following his release. They now plan to help him adjust to life as a free man, working closely with him and a caseworker.

"​​He has been incarcerated 28 years, he comes from a really poor family. He's like a 10th grade dropout. He doesn't have a toothbrush, a job, an ID," Lane said. "He couldn't just walk out of the jail."

Mérrida Coxwell of Coxwell & Associates PLLC, a prominent criminal defense lawyer in Mississippi who worked pro-bono on the last phase of Brown's case alongside Tom Fortner of Lowrey & Fortner PA, told Law360 in an email that Brown is adjusting well, considering the amount of time he spent confined in a prison cell.

"He is unfamiliar with modern things like cellphones, streaming TV, and the general way in which the world has gone digital," Coxwell said. "We have social workers helping his adjustment, and we hope his adjustment will continue to improve."

Fortner told Law360 he was pleased that Brown was released.

"I'm glad it all worked out. It was a strange case. It was a hard case," Fortner said. "The wrong people get convicted sometimes. It's always a really good feeling when something like this gets straightened out. It felt real good."

In an email to Law360, Stephens, a patent litigator, said Brown has been a "victim of shoddy forensic and expert evidence" that was allowed at trial despite lacking scientific support.

"Science is the best source of truth available to human beings, but when experts present conclusions as scientific when they have not been subject to real scientific scrutiny, it can lead to tragic mistakes," he said.

Seeing Brown walk out of prison was a highlight of his legal career, but also a deeply fulfilling moment, Stephens said. "His strength of spirit and lack of bitterness after 28 years of wrongful imprisonment is an inspiration."