By Jimmy Hoover · Listen to article

U.S. Supreme Court watchers scanning both the draft and final version of the decision in Dobbs v. Jackson Women's Health

quickly discovered the documents to be virtually identical, save for a few minor stylistic changes and new responses to Chief Justice John Roberts' concurrence and the liberal justices' joint dissent. Word after word, page after page, Justice Alito's rationale for jettisoning the 49-year-old constitutional right to abortion was exactly the same as that contained in the initial draft of the ruling published in Politico in early May.

"Nobody objected to anything in the draft," professor Mark Graber of the University of Maryland's Francis King Carey School of Law said in an interview. "This was a fairly generic argument against Roe, and so it's not surprising that it didn't change much. Alito already had his majority. He was never getting Chief Justice Roberts. There's added material in response to the chief justice. But this summarized where the five justices in the conservative majority were."

In other words, Graber said, "Minds were made up almost immediately."

What Changed From Draft to Final Opinion

Although the documents were virtually identical, there were some small differences. 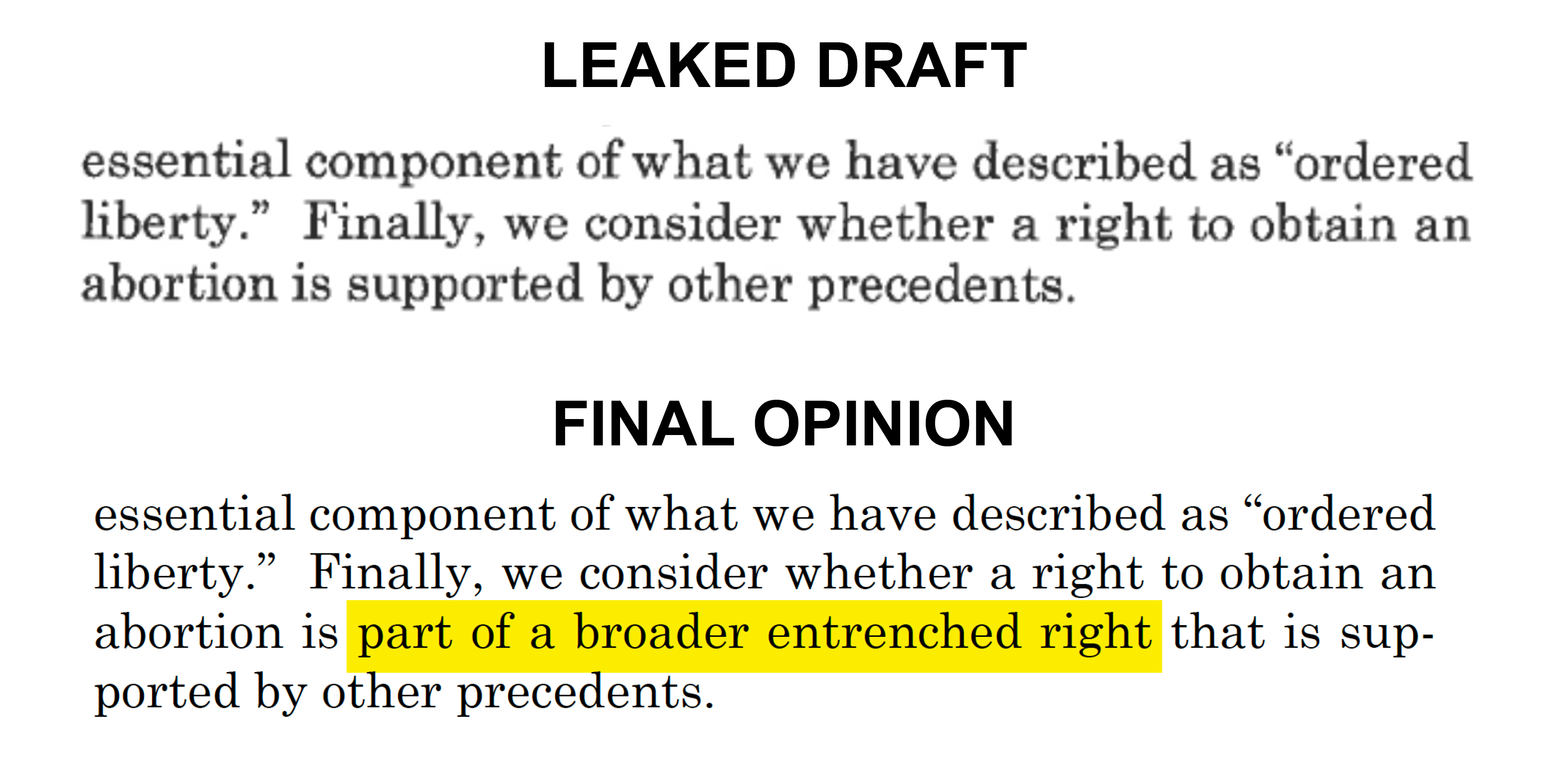 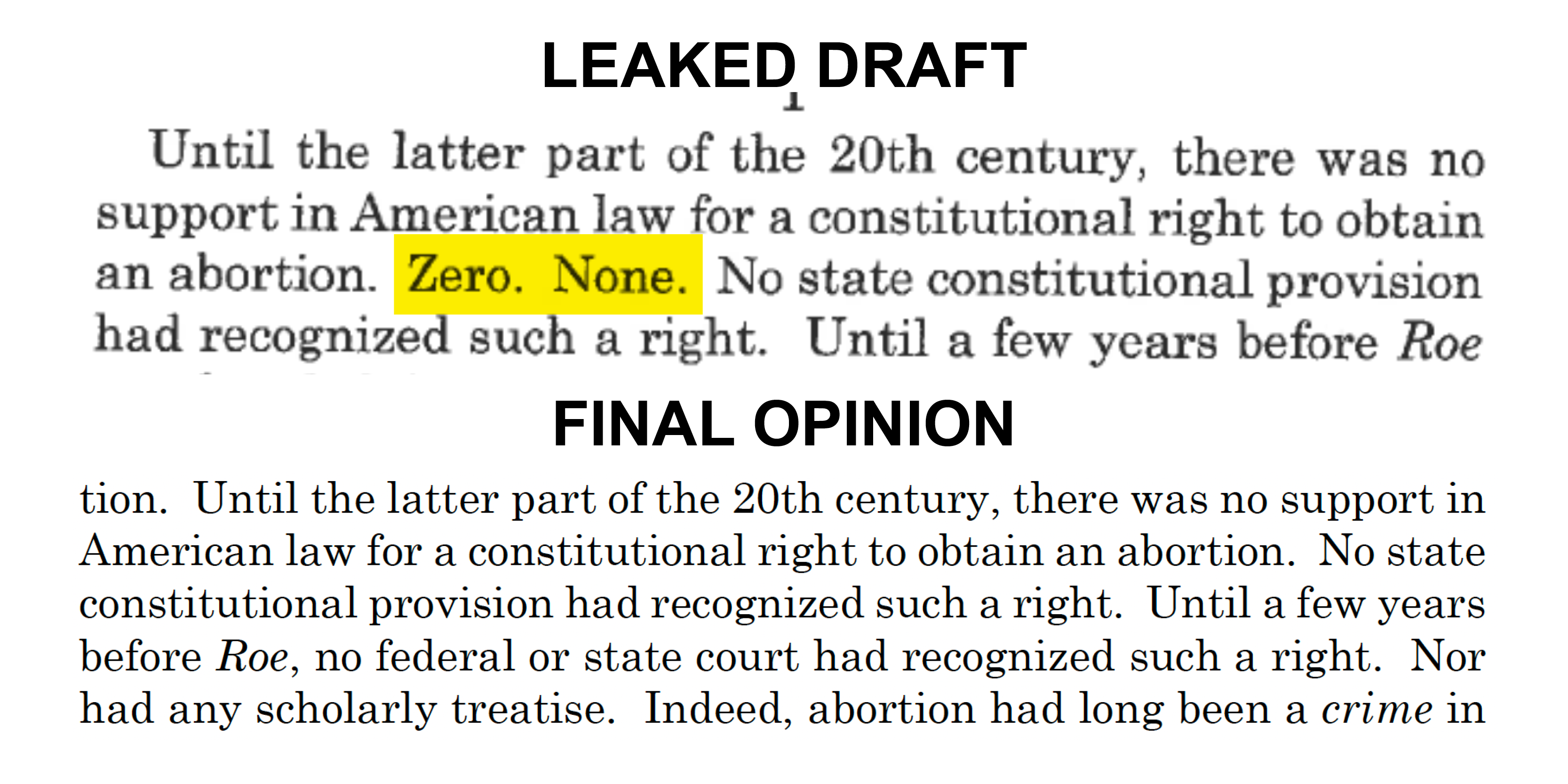 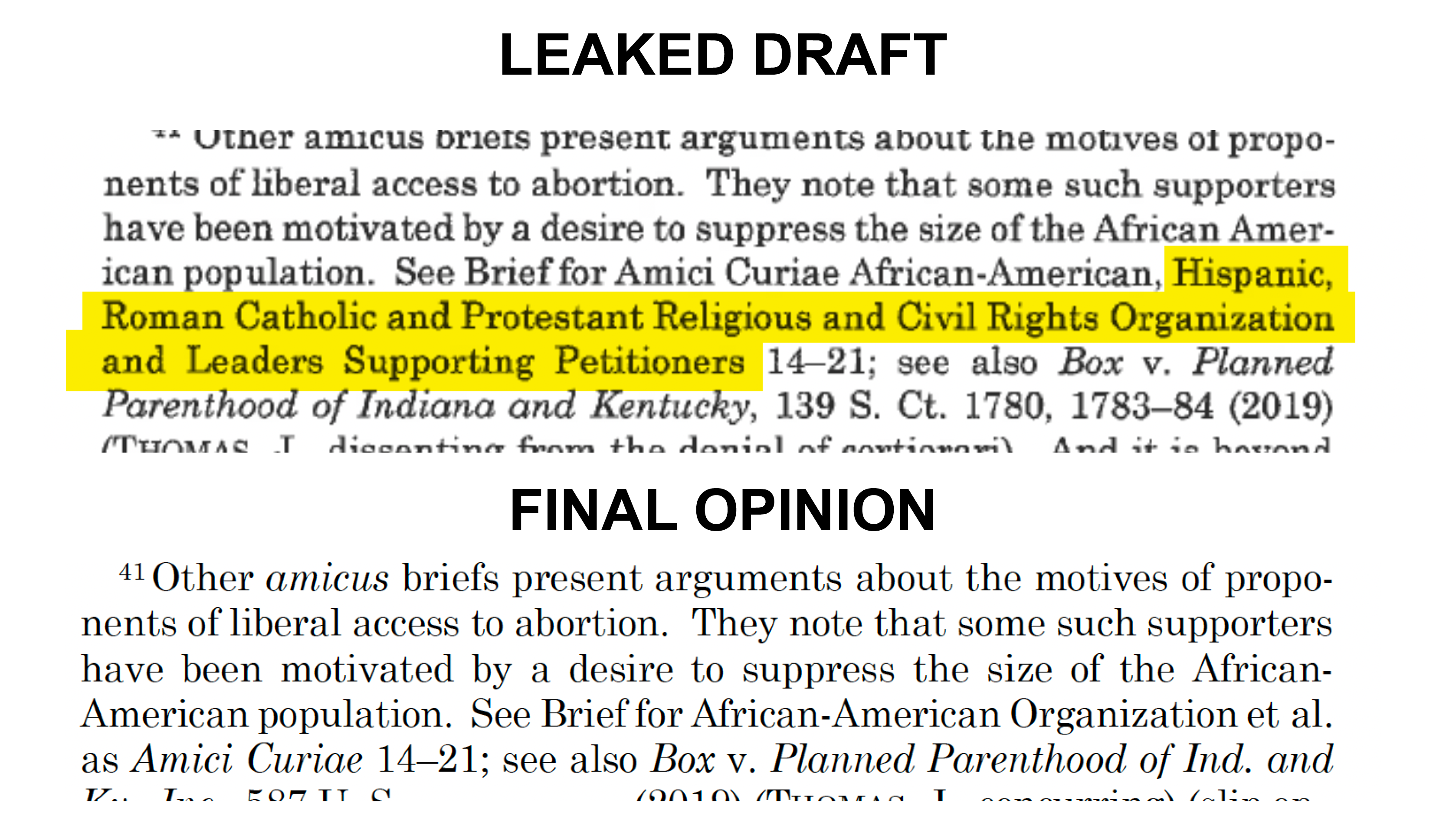 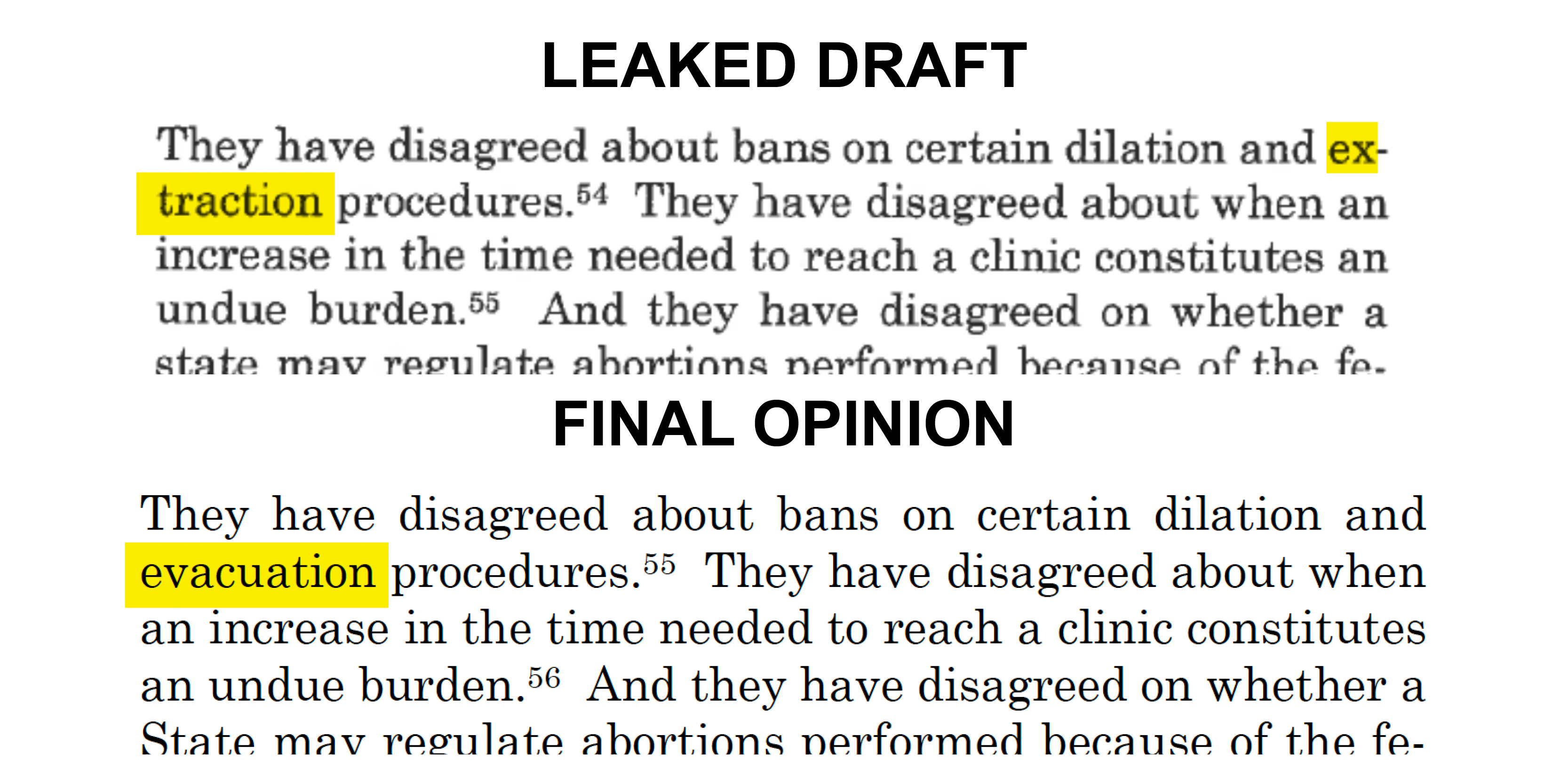 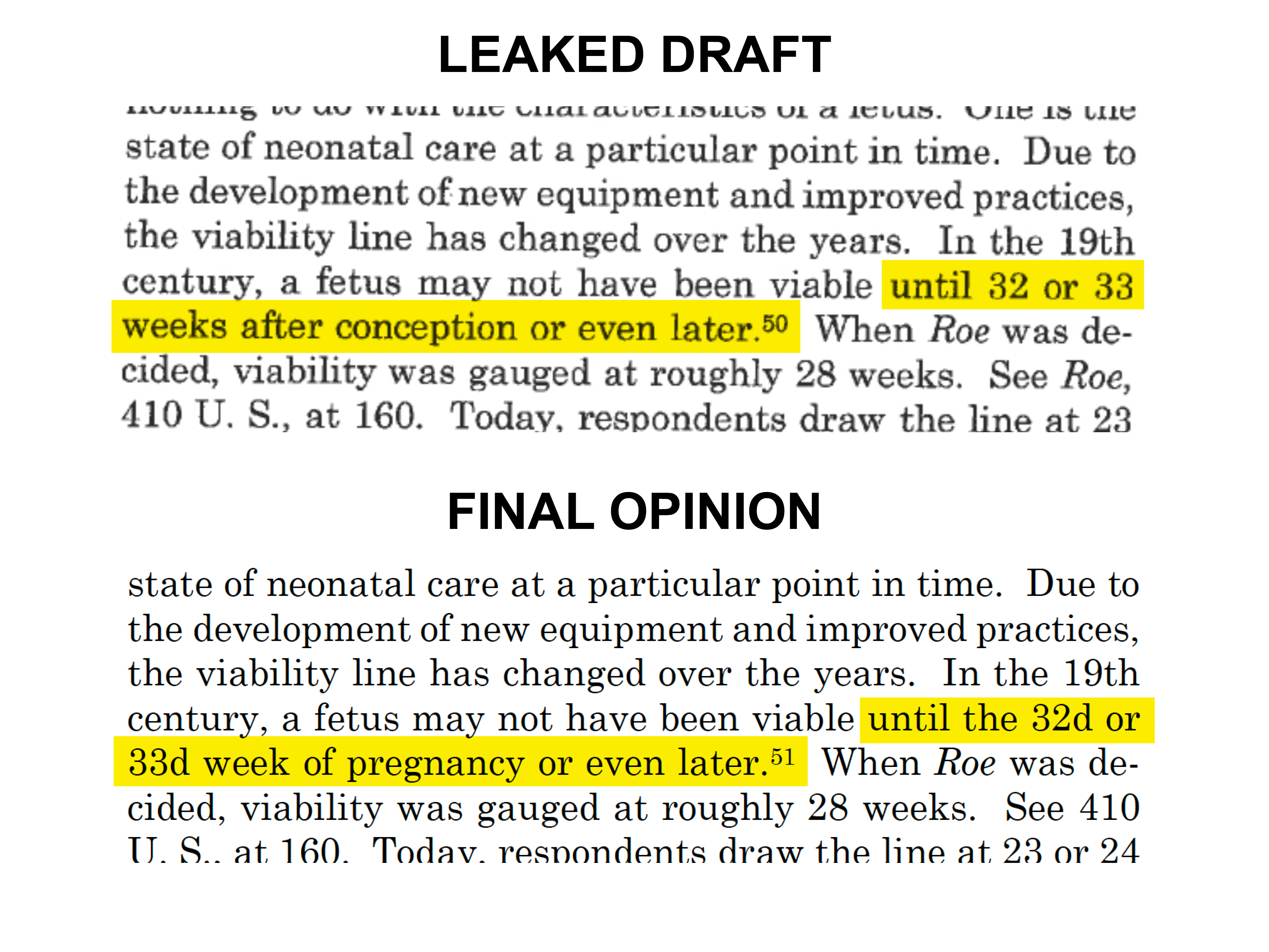 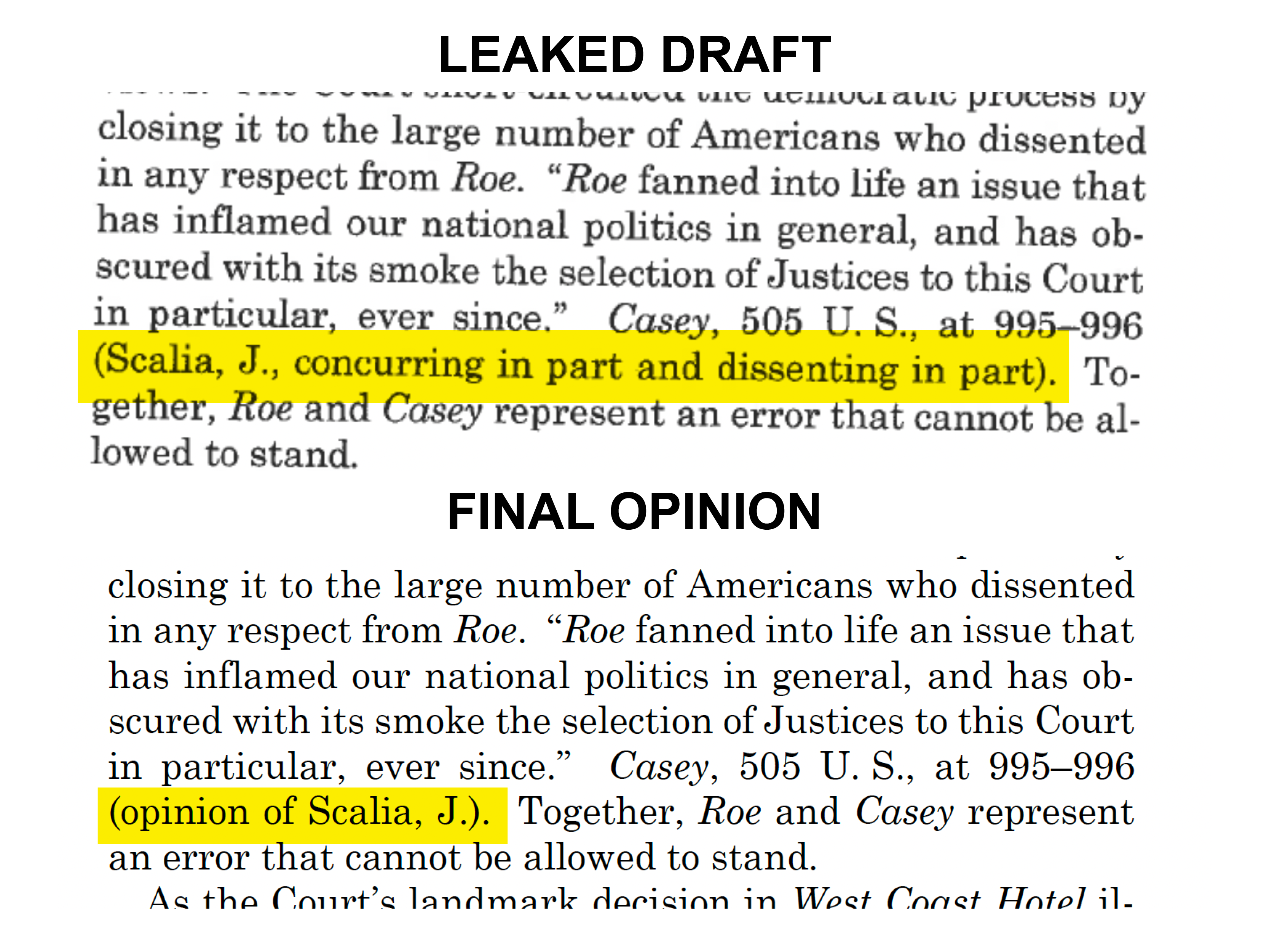 Justice Alito's final opinion, stretching 79 pages even before its appendix, concluded that Roe was "egregiously wrong from the start" and that the right to an abortion is not protected by the due process clause of the 14th Amendment. The decision is expected to result in a nationwide rollback of abortion rights, with many states soon to pass outright bans on the procedure.

After the draft of the ruling leaked in May, the Supreme Court quickly issued a statement that authenticated the material but emphasized that it "does not represent a decision by the Court or the final position of any member on the issues in the case." In fact, back in May, some experts warned that the draft marked just the beginning of the debate among the justices and didn't necessarily reflect their current thinking.

But Joseph Thai, who clerked for then-Justice John Paul Stevens and is now a professor at the University of Oklahoma College of Law, told Law360 that "the amount and degree of changes demanded after a draft opinion circulates depend largely on the strength of the coalition backing the draft holding and rationale."

"Sometimes, a fence-sitting fifth vote can hold a draft hostage and extract significant changes," he said. "Apparently, despite reassurances at confirmation hearings that Roe is settled law and stare decisis matters, there were no fence-sitters among the majority to overrule Roe."

"The five-member majority did not flinch from the public backlash following the leak," Thai said. If anything, he said, the leak had the opposite effect. "It was likely that it fortified the majority coalition and entrenched the draft. Diluting the draft might give the appearance of buckling under the public backlash. Instead, under attack, the five justices circled wagons."

Maryland professor Graber, however, was skeptical that the leak hardened the position of the conservative justices. What is more likely is that the court's Republican appointees, with the exception of Justice Roberts, already were in lockstep on an issue that has been at the center of political discourse since Roe was decided in 1973, he said.

Many issues that the justices face involve complex questions of civil procedure or statutory interpretation, where their views are not necessarily set in stone. That's hardly true for abortion. "We're at the stage with abortion … is there anything new that can really be said?" said Graber.

"On a lot of issues people change their mind," he added. "But on something like abortion, when you've been thinking about it since you were 15, you're not changing your mind."