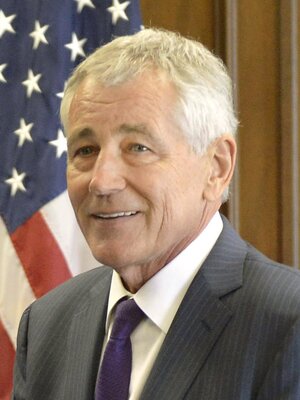 The commission was formed to study why about a third of veterans have been arrested and booked in jail at least once, compared to less than 20% of nonveterans, and recommend evidence-based policy changes to help them. The research is designed to last two years.

During Hagel's tenure as defense secretary from 2013 to 2015, he led initiatives in the military to increase resources for preventing suicide, combating sexual assault and accounting for missing personnel, according to his CCJ biography.

Before becoming defense secretary, Hagel served two terms as a Nebraska senator and was a senior member of the Senate Committees on Foreign Relations; Banking, Housing and Urban Affairs; and Intelligence.

Hagel spoke with Law360 about his role on the commission and how it will help veterans. This interview has been edited for length and clarity.

How did you become chair of the Veterans Justice Commission?

I was invited by the Council on Criminal Justice to serve as the chair. I think given my Vietnam veteran experience, being secretary of defense, being the No. 2 guy at the [Department of Veterans Affairs] during the Reagan administration … and [because] I've always been involved in veterans issues. So I think all of those things probably added up to why they asked me to chair this 15-member commission.

How's the commission's work going to bring justice to veterans?

We have over 180,000 veterans who are in prisons and jails across this country. Many of them are serving life sentences. Now that's an astounding number. I think most people would be shocked to know that. These are men and women who have devoted a certain amount of their life — a lot of them 20 years of their careers — to the security of this country. They took an oath of office. They followed rather rigorous guidelines of the profession. They put that uniform on to not only protect our country and secure our country all over the world, but had a high purpose.

And so you look at that and what they achieved, and then you ask the question, "How could that happen?" That these are the kind of men and women who would go into that work, but yet when they come back [and] get out of service, end up in jail and penitentiaries. Some of them do some pretty bad things.

How is it that that can happen? Why does that happen? Are we failing the veterans somewhere? I think it's not just one agency, one department or one group we've got to look at as our veterans transition out from the Department of Defense. There are about 200,000 transferees every year of active duty military transferring into civilian life. Is it something that starts in the military? Is it post-traumatic stress syndrome? Is it traumatic experiences? Is it abuse of alcohol and drug use? We know it's all those things, but we're not paying enough attention to it — all the agencies and departments. What we want to do is we want to go deep into this and see if we can help these veterans before it's too late, before they do get sentenced, and before they do hurt other people and violate laws. So we're going to be looking at every aspect of that.

From the commission's preliminary assessment report, it seems like there is some research that suggests risk factors such as trauma, PTSD, physical brain injury, substance abuse, military sexual assault and homelessness increase veterans chances of becoming involved in the criminal justice system. What additional research needs to be done to better understand the connection between these risk factors and veterans' involvement in the criminal justice system?

When I was secretary of defense, I put out a directive in 2014 to have all services review bad paper [other than honorable] discharges because … when my brother Tom and I were in Vietnam in 1968, which was the worst year, a lot of Vietnam veterans coming back had PTSD and our government didn't recognize that for a long time, just like they didn't recognize exposure to Agent Orange. But there are so many factors that are involved here and what we want to do is we want to go into some detail and look at all these different factors.

For example, you mentioned sexual assault … When I was secretary of defense, I started a new sexual assault office in the Pentagon, and every Friday night, if I was in town, we'd have meetings with the chiefs of staff of each of the services on what's been done. We'd changed the curriculum [for] all the services [and] service academies on sexual assault. I had RAND do a complete survey for the Department of Defense on all of this, but we don't know enough about it.

I think our institutions have failed these veterans by not going deep enough and wide enough into these causes that allow veterans to get so off track that he or she feels that the only thing that they can do, or they want to do, or alternatives or consequences, are [to] break the law. We're going to look at all of that, and we're going to look at every dimension.

Is one of the things that needs to be researched more why one veteran who has trauma or PTSD or a physical brain injury commits crime and another veteran who has those risk factors doesn't?

The Defense Department has done a better job over the years in the transitioning process to kind of sort out some of these issues early on to identify some of these people who are more vulnerable. Quite frankly, some people just shouldn't be in service. Some people are just not built for that kind life.

Now, when I was in Vietnam, it was a draftee war. So the government was taking anybody who could walk, and there were so many kids that should have never been in the service, never had a uniform on. That means even before they went into the service, they had trouble. That's still the case with some [veterans], even though it's an all-volunteer force today. The downside there is we've had the two longest wars America has ever been in — 20-year wars in Afghanistan and Iraq. Because it's an all-volunteer force, we keep sending the same people back. You keep sending them back five, six, seven times for combat tours. That has an effect on people. I don't care who you are or how strong you are, that affects you.

That's a factor that we do know and that leads to some real problems the military has in recruiting. The Army today is far below its quota in recruiting. These factors that we're going to be looking at have short-term and long-term consequences for our military. It's a large universe of issues that we need to take a look at and study a lot more than what has been done.

That's what we're going to be looking at. As I said in 2014, I sent out a directive from the secretary of defense to all the services telling them to review all post-traumatic stress discharges, dishonorable discharges, bad paper discharges [or] general discharges, because I saw through my own experiences that a lot of these kids were slipping through the cracks. They did something in the military … [and received] a dishonorable discharge, but … that means you have no VA benefits. The VA cannot help you because of the bad paper discharge. Too many kids were just being thrown under the bus. Not enough attention was [given to] why did this happen to this kid?

If nothing else, we got to help them. We can't help them if they don't have any benefits, and the VA is good at this stuff. The VA cannot help a kid who's been given a dishonorable discharge. There's no way legally. So that starts with the Department of Defense.

I think our law enforcement agencies don't give much attention to a veteran who does something stupid [and] breaks the law. We should have some support for them [and] not do nothing. We've got to find ways to help them. We can't do that unless we have the facts, unless we have some good research on all this.

What was the result of that directive that you issued? From the preliminary assessment, it seems like it didn't have much of an effect because veterans with these bad paper discharges are still not getting VA benefits.

I think these are the things we're going to be looking at that are not being done now. As I said earlier, this is not just the VA [or] DOD. There are things I think within law enforcement they can do to be more aware of this issue.

What we're trying to do here is when a veteran commits a crime, we should have some mechanisms for police departments [and] law enforcement to evaluate that individual. Can we help them not make another mistake? Is there something that we can do now, even before they commit a crime? All of us have some responsibility, and all the recommendations that we'll be making are going to focus on all that societywide responsibility.

Do you think the criminal justice system has failed veterans?

I'm not going to make that kind of judgment until we get into this a little further. I think we've all in a way failed veterans, but I'm not going to lay any blame at one entity — criminal justice, VA, DOD — because I don't think it's right to start with. I think everybody can be [and] should be doing a lot more and should have been doing a lot more, but until we get into the specifics of it I'll hold my judgment on that.