Law360, Washington (June 27, 2018, 2:04 PM EDT) -- Associate Justice Anthony Kennedy, 81, the U.S. Supreme Court's most senior member, is stepping down from the bench, the court announced Wednesday. His retirement will hand President Donald Trump the chance to replace a crucial swing vote and shift the ideological balance of the court to the right. 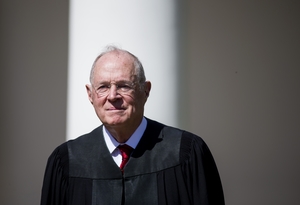 Justice Kennedy's retirement will take effect July 31, according to a statement distributed by the court's press office.

"It has been the greatest honor and privilege to serve our nation in the federal judiciary for 43 years, 30 of those years on the Supreme Court," he said in a statement.

Justice Kennedy was rumored to have considered retirement at the end of the 2016-17 Supreme Court term, but he stayed on for another year, casting deciding votes in cases involving class action waivers, President Donald Trump's travel ban and the fate of public-sector unions.

"Justice Kennedy has been a tireless voice for individual rights and the Founders' enduring vision of limited government," the White House said in a statement. "His words have left an indelible mark not only on this generation, but on the fabric of American history."

Trump met with Justice Kennedy on Wednesday and later told reporters in the Oval Office that he has been a "great justice of the Supreme Court," according to a White House pool report. Trump indicated that the search for his replacement will "begin immediately" and said he asked Justice Kennedy for a recommendation on his replacement. Trump did not describe Justice Kennedy's reply, the report said.

The White House has published a list of 25 names of possible Supreme Court nominees on its official website, a smattering of federal appellate and state supreme court judges with strong ties to right-leaning networks like the Federalist Society. Indeed, the group is said to have played a significant role in developing an earlier version of the shortlist during the 2016 presidential campaign.

President Trump indicated that Justice Kennedy's replacement will be "somebody from that list."

"President Trump's list of potential nominees for this vacancy includes many of the very best judges in America, judges who have records of being fair and independent and applying the Constitution as it was written," said Federalist Society Executive Vice President Leonard Leo, an outside adviser to President Trump on judicial nominations. "I expect the nominee to be like Justice [Neil] Gorsuch, to demonstrate excellence in every respect, and to earn widespread support from the American people, and bipartisan support for confirmation in the Senate."

Nominated by President Ronald Reagan in 1987, Justice Kennedy settled into an influential position at the center of the court's ideological makeup over the course of his 30 years on the bench. His record in cases involving LGBT rights and abortion access left Republicans feeling betrayed by one of their own appointees, while his votes against campaign finance reform and civil plaintiffs frustrated liberals, who viewed him as unreliable.

The justice's outsized role on the court was evident early on. In the 1992 case Planned Parenthood of Pennsylvania v. Casey, Justice Kennedy co-authored a plurality opinion that reaffirmed Roe v. Wade, the controversial ruling from two decades earlier that established women's constitutional right to abortion. Eleven years later, the justice took a big step in forging an LGBT legacy by striking down a Texas anti-sodomy law in Lawrence v. Texas. Justice Kennedy wrote for a 6-3 majority, which included fellow Republican appointee Justice Sandra Day O'Connor, that  the "petitioners are entitled to respect for their private lives."

Justice Kennedy bolstered that legacy with his 2013 decision in U.S. v. Windsor, finding the Defense of Marriage Act, which defined marriage as between a man and a woman for federal purposes, unconstitutional. Finally, in perhaps the most famous decision of his career, the justice cast the deciding vote in the 2015 case Obergefell v. Hodges, ruling that same-sex marriage is protected by the due process and equal protection clauses of the U.S. Constitution.

"No union is more profound than marriage, for it embodies the highest ideals of love, fidelity, devotion, sacrifice and family," Justice Kennedy wrote in the majority opinion that employed his trademark sentimental prose. "It would misunderstand these men and women to say they disrespect the idea of marriage. Their plea is that they do respect it, respect it so deeply that they seek to find its fulfillment for themselves."

His standing as a towering figure for gay rights met perhaps its toughest test during the October 2017 term with the case of a baker who was disciplined by the state of Colorado for refusing to make a custom cake for a gay couple's wedding reception. In Masterpiece Cakeshop v. Colorado Civil Rights Commission, many had expected him to rule against the LGBT community in favor of the baker's First Amendment argument argument that the state couldn't force him to express a message that violates his religious beliefs.

High Court Alignment in the Balance

Justice Kennedy's retirement is expected to pull the political balance of the court further to the right, as Trump will have the opportunity to replace him with a more reliably conservative jurist. That is in large part because during Justice Gorsuch's confirmation Senate Republicans eliminated filibusters for Supreme Court justices and now require only 51 votes to confirm a nominee.

"It is imperative that the president's nominee be considered fairly and not be subjected to personal attacks," said McConnell, who was responsible for organizing Senate Republicans in opposition to President Barack Obama's failed Supreme Court nominee, D.C. Circuit Judge Merrick Garland, before adopting the rule change that rocketed Justice Gorsuch to the high court.

Democrats, meanwhile, have said there should be no action on any nominee until the midterm elections, when the party controlling the Senate could change. "Leader McConnell set that standard in 2016 when he denied Judge Garland a hearing for nearly a year, and the Senate should follow the McConnell standard," said Sen. Dianne Feinstein, the ranking Democrat on the Judiciary Committee.

"The Supreme Court has an effect on the lives of every single American, and the American people should have a say in who the next nominee will be," Feinstein said, deploying nearly the same rhetoric McConnell used to justify the historic obstruction of the Garland nomination.

A graduate of Stanford University and Harvard Law School, Justice Kennedy sat on the Ninth Circuit in his native California before he was tapped by President Reagan to replace Justice Lewis Powell in 1987. He was the third choice for the seat after the Senate voted down D.C. Circuit Judge Robert Bork as too conservative, and the next choice, D.C. Circuit Judge Douglas Ginsburg, withdrew amid scrutiny over his past marijuana use. Receiving praise from both sides of the aisle, Justice Kennedy was confirmed by the Senate 97-0 in February 1988 after a seven-month vacancy.

Despite attempts to cast him as a liberal turncoat, Justice Kennedy regularly sided with the court's conservative wing on major rulings, such as the 2000 decision in Bush v. Gore, which ended the Florida recount and handed the presidency to George W. Bush, and, more recently, in Citizens United v. Federal Election Commission, which struck down restrictions on political expenditures by corporations and unions.

It is no surprise then that Justice Kennedy won significant praise from Washington Republicans, as well as right-leaning legal figures.

"Justice Anthony M. Kennedy is one of the leading thinkers on the court, and he is well-respected because he focused on the arguments made by counsel, listens closely and asks thoughtful questions at oral argument, and thinks carefully through each case, trying to reach the appropriate outcome in each matter before him," said Jamil Jaffer, a former clerk to Justice Gorsuch now at at George Mason University's Antonin Scalia Law School.

Update: This story has updated with information about possible replacements for Justice Kennedy and more reactions, including from lawmakers.