By Xiumei Dong
Law360 is providing free access to its coronavirus coverage to make sure all members of the legal community have accurate information in this time of uncertainty and change. Use the form below to sign up for any of our weekly newsletters. Signing up for any of our section newsletters will opt you in to the weekly Coronavirus briefing.


Law360 (April 13, 2020, 10:32 PM EDT) -- A group of UCLA law students published an open letter Monday condemning a corporate law professor who they said perpetuated xenophobic stereotypes by speculating in a now-deleted tweet that Chinese students in his class were responsible for his recent sickness.

In a two-part tweet posted on April 6, Professor Stephen Bainbridge retweeted an article from The Economist, saying that he would like to get an antibody test for the novel coronavirus when one becomes available. He then noted that he had cold or flu-like symptoms early in the year and implied that he might have gotten his sickness from his Chinese students.

"I have a number of Chinese students in my class this semester and I wonder if one of them might have brought the virus back from China," Bainbridge said. "I assume not because I know of nobody else at the law Schoo[l] who got sick, but still… One wonders." 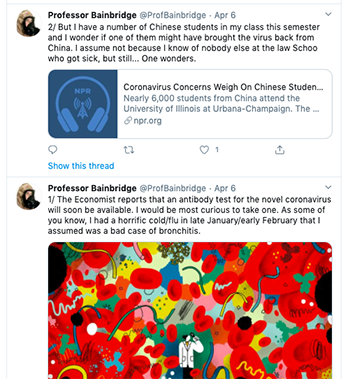 A screenshot showed UCLA law professor Stephen Bainbridge's tweets before they were deleted.

Shortly after, student groups from the law school, especially the Asian and Pacific Islander Law Student Association, or APILSA, reacted strongly against his comments. One first-year law student tweeted back at Bainbridge, questioning why the university tolerated his behavior.

"This is a @UCLA_Law professor, who gets to teach at an institution that will rather support racist professors than the students, particularly students of color," Asian American student Alton Wang tweeted. "And we wonder why law school isn't an inclusive environment and why institutional barriers remain for many [people of color]."

Bainbridge made a public apology to Wang, explaining that it was not his intention to offend anyone, and acknowledged he had made a mistake and his comment was "inappropriate. He also sent an apology email to APILSA.

In Monday's letter, APILSA said it cannot "fully accept" Bainbridge's apology, arguing it cannot make up for the "material harm" he had caused the Asian American community at the law school.

Apart from demanding a fuller apology from Bainbridge, the group wants the law school administration to denounce the professor's comments and create standards for the public social media behavior of faculty members.

"We strongly condemn Stephen Bainbridge's egregious tweets posted on April 6, which irresponsibly perpetuate xenophobic stereotypes," APILSA said in the letter. "This is a blatant violation of the spirit of the UCLA Faculty Code of Conduct, which states that faculty at UCLA must not discriminate against students on the basis of race or national origin."

As of Monday, over 350 law students across the country have signed APILSA's letter. APILSA is also hosting an online forum to address xenophobia experienced by students.

This is not the first time UCLA law students have reacted fiercely to Bainbridge's comments online. In 2011, Bainbridge posted a blog item about FedEx Express Office online services, calling a customer service representative he spoke with as a "moron with an impenetrable accent."

And before posting the controversial tweet on April 6, Bainbridge posted a tweet on Feb. 25 that said, "If we ask nicely, do you think we can get China to ban eating bats, civets, and other wild animals that serve as viral hosts?"

"This situation surpasses the lifespan of a deleted Tweet," APILSA argued in the letter. "What was a learning moment for Stephen Bainbridge was a deeply hurtful moment for his audience."

According to the letter, more than 1,100 incidents of racism and hate crimes against Asian Americans because of the coronavirus outbreak were reported in a two-week period starting March 19 to Stop AAPI Hate, a reporting center opened the same day by the advocacy group Asian Pacific Policy and Planning Council. These incidents include verbal harassment, physical abuse and discriminatory actions such as barring Asian Americans from business establishments and ride-sharing services.

"Although these tweets may not necessarily trigger violence directly, they perpetuate the same stereotypes that instill resentment, fear, and shame in their readers, ultimately inhibiting learning and a sense of belonging at the law school," the letter added.