Gender Disparity At The High Court: How Top Law Firms Measure Up

In the first sitting of the new U.S. Supreme Court term this month, six women stepped up to the podium to argue cases on issues ranging from the scope of the Federal Arbitration Act to the rights of landowners in federal court.

By contrast, 16 arguments were made by men. While still far short of gender parity, it was a more promising start for women who seek to argue cases before the nation's highest court.

Last October, three women stepped up to the podium during that first two-week period, and the term ended with the rate of arguments made by women hitting a 10-term low. In the last 10 completed terms, the percentage of arguments handled by women at the Supreme Court was 17 percent. But in the 2017 term, that number hit 12 percent.

Law360 did an in-depth data study to pinpoint where the disparity starts. We looked at all of the attorneys who have argued in the Supreme Court over the last 10 completed terms — 616 men, compared to 125 women — and found the firms with the highest, and lowest, rate of putting a woman behind the podium at 1 First St.

Of the 10 firms that have argued most frequently before the high court in the last decade, four have put no women up for oral argument during that time: Sidley Austin LLP, Mayer Brown LLP, Kellogg Hansen Todd Figel & Frederick PLLC and Jones Day. All either did not respond to multiple requests for comment or declined to address the matter.

Only seven law firms have had at least four oral arguments before the high court by female lawyers over the past 10 terms — and many of those arguments have been handled by the same woman. The number of individual women who argued last term also dropped, from 21 in the 2016 term to 16 in 2017.

With so few women involved in directing rulings that affect the nation, the court risks losing a substantial viewpoint, advocates and scholars say.

"If that female voice is lost at the Supreme Court, that impacts the case law that affects everyone, and only about half of the population is having its voice heard at the court," said Texas A&M political science professor Shane Gleason. 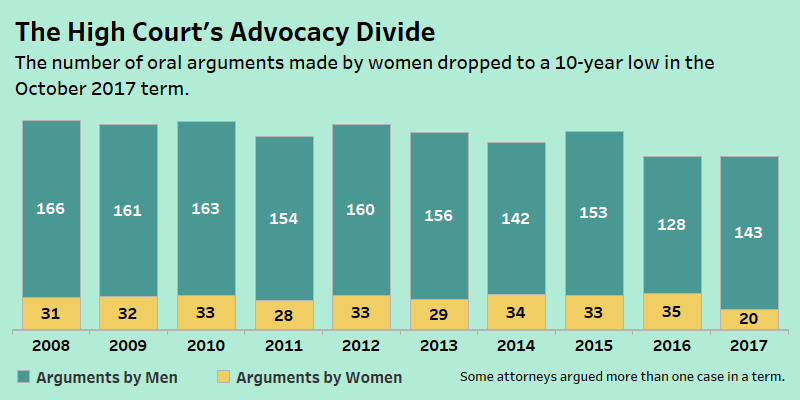 How law firms determine who argues cases depends on a range of factors, not the least of which is the preference of the client. Sometimes the argument will go to whoever worked on the case in the lower court, and other times it will be argued by whoever brought in the client.

"The former SGs and former acting SGs get a huge number of arguments, and they're all men right now … so that sucks up a lot of the oxygen," said Sarah Harrington, who worked at the SG's office as an assistant for eight years before moving to Goldstein & Russell PC in 2017.

Of the firms that argued before the Supreme Court the most in the past decade, Jenner & Block tops the list of most likely to put a female advocate before the high court. With four cases argued by women and 19 argued by men in the past 10 terms, the firm's rate of women-argued cases stands at 17.4 percent. 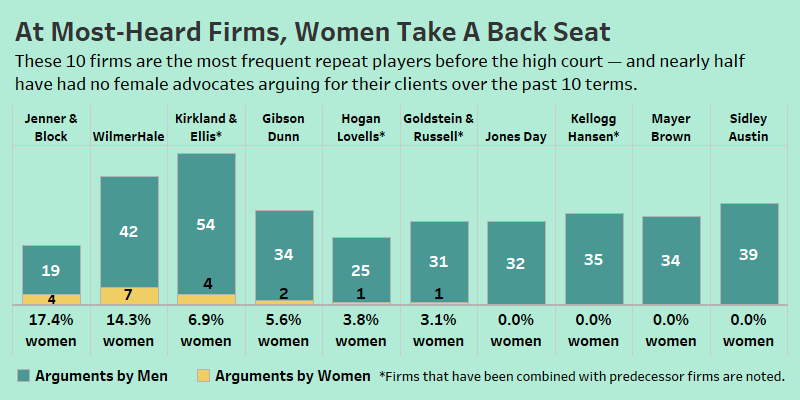 At the firms that have put no women before the court in the past 10 terms, some rely on the same man for the majority of oral arguments, whereas others divide them evenly among a wide pool of male advocates.

At Sidley, partner Carter Phillips argued 26 out of the firm's 39 arguments over the past 10 completed terms. A former firm chairman, Philips holds the record for the most Supreme Court arguments by an attorney in private practice, beyond the 10 terms of this study.

At Mayer Brown, most of the cases were argued by Charles Rothfeld and Andrew Pincus, who are leaders of the Yale Law School Supreme Court Clinic. The firm's appellate practice is co-chaired by three attorneys: Pincus, Evan Tager and Lauren R. Goldman. Tager also argues cases in the Supreme Court, and Goldman is working on cases in the Ninth Circuit.

At D.C.-based litigation boutique Kellogg Hansen, most of the firm's 35 arguments at the Supreme Court in the last 10 terms were handled by David Frederick, a former clerk for Justice Byron R. White.

The 32 arguments from Jones Day over the last 10 terms were distributed among 16 different men, with Michael Carvin, who argued on behalf of petitioners in King v. Burwell, and Shay Dvoretzky, a former clerk for Justice Antonin Scalia, handling the most.

In the past 10 terms, seven firms have had at least four oral arguments by women at the high court. Quinn Emanuel has had the most cases argued by women, followed by Arnold & Porter and WilmerHale, who are tied for the second most. 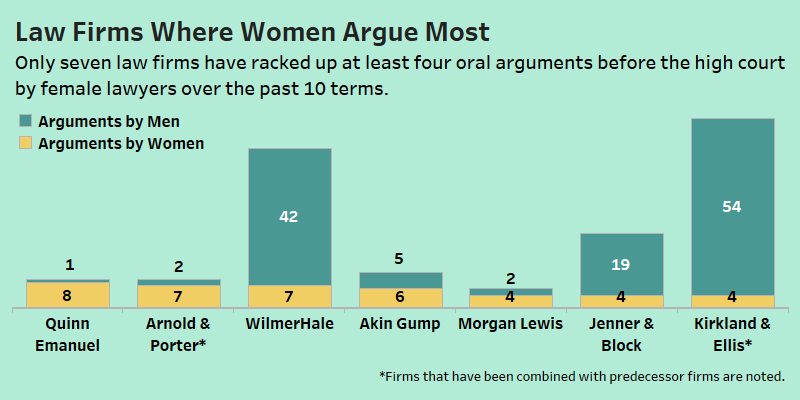 Quinn Emanuel, Arnold & Porter and Akin Gump more often have women argue before the high court than men, though all of those arguments have been handled by one or two women. At Quinn Emanuel, practice chair Kathleen Sullivan argued seven cases, and Sheila L. Birnbaum, who is now a partner at Dechert LLP, argued one.

At Arnold & Porter, Lisa Blatt, who has a near-perfect high court win record, has been the sole female arguer, with seven arguments in the past decade. Most recently, Blatt notched a win for a group of hospitals in a three-case argument over ERISA's religious exemption provision.

WilmerHale's cases have been argued by Catherine Carroll and Danielle Spinelli. Carroll, who is a former clerk for Justice David H. Souter, has argued three cases in the past 10 terms, most recently arguing on behalf of Helmerich & Payne in foreign expropriation case Venezuela v. Helmerich & Payne Int'l

Spinelli, a former clerk for Justice Stephen Breyer and vice chair of WilmerHale's appellate and Supreme Court practice group, has argued four cases in the past decade. She most recently argued on behalf of creditors in bankruptcy case Czyzewski v. Jevic Holding Corp.

All six of the female-argued cases at Akin Gump were carried out by Patricia Millett, who is now a judge for the U.S. Court of Appeals for the D.C. Circuit.

At Morgan Lewis, Allyson Ho argued four of the firm's six cases over the last decade, including a win in April 2017 in McLane v. Equal Employment Opportunity Commission

, when the justices ruled that federal appeals courts should use a deferential standard to review trial court decisions on enforcement of EEOC subpoenas. Ho recently moved her practice to Gibson Dunn.

, when the justices ruled that criminal defendants can challenge the constitutionality of laws they already pled guilty to breaking if they didn't explicitly waive the right to do so.

And at Kirkland, all four cases were argued by Erin Murphy, who argued last term for the Wisconsin State Senate as amicus in the gerrymandering case Gill v. Whitford.

A significant proportion of female advocates before the court in the past decade were women from the solicitor general's office, so the dropping numbers of women from that office arguing cases could signal a lessening of opportunities for women. 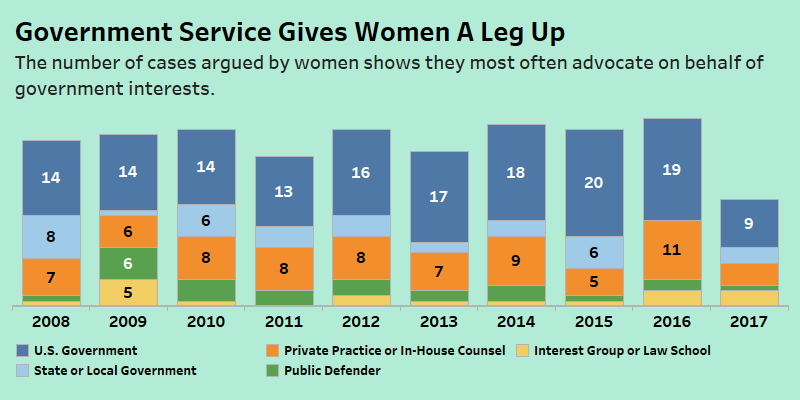 Prior to this drop, women argued 19 cases on behalf of the solicitor general's office in 2016.

Six women left the office in the last year. Several of the women who left called the surge in departures "coincidental."

The number of female assistants to the solicitor general leaving had an effect on the presence of women in the courtroom. In 2016, seven women argued cases on behalf of the federal government, and in 2017 that number dropped to five.

Harrington, one of the women who left the SG's office for private practice last year, said the gender balance of high court advocates will begin to shift once women start occupying the roles of solicitor general and deputy solicitor general, posts currently held by men.

"It's all because each level is dependent on the level before," she said. "We need some change at the bottom. I think the gender disparity among private practice lawyers in the Supreme Court is going to be the last thing to change."

"I think there will be generational change and we'll see it in the next few years," said Sullivan, the Quinn Emanuel practice chair.

Methodology: Law360 counted all advocates who appeared in the transcript of each oral argument before the U.S. Supreme Court from the 2008 term through the 2017 term. The law firm or organization the attorney is affiliated with was verified in documents filed with the Supreme Court if it is unclear from the transcript. Some cases have more than one oral argument. This data counts each of those arguments separately.

Our analysis of law firms does not include solo practitioners.

Amanda James and Annie Pancak are data reporters for Law360 who also contributed to the first installment in this special report. Additional reporting and data analysis by senior data reporter Jacqueline Bell. Graphics by Jonathan Hayter. Editing by Jocelyn Allison and Rebecca Flanagan.

Correction: A prior version of this story incorrectly referred to one of the Mayer Brown attorneys as a practice co-chair. It also included an incorrect Supreme Court citation. The errors have been corrected.