The agency's latest guidance took on scenarios that it hadn't yet addressed in previous iterations of a Q&A document it first issued on March 24 and has updated several times after the passage of the Families First Coronavirus Response Act. The law, which President Donald Trump signed on March 18, takes effect April 1 and will remain in place until the end of the year. 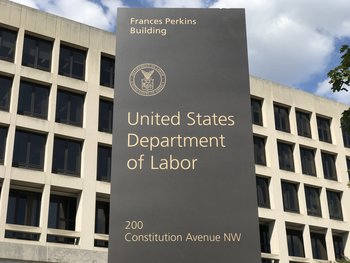 The U.S. Department of Labor has expanded its guidance on the Families First Coronavirus Response Act.

The topics tackled by the DOL in Saturday's updated guidance include the extent to which certain small businesses can be exempted from the FFCRA's mandates and whether public sector workers can avail themselves of leave under the new law, among other things.

"The response to the guidance we've published so far has illustrated the critical need that workers and employers have for this important information," said Cheryl Stanton, administrator of the DOL's wage and hour division. "This round includes some of the most common questions we are receiving and will help ensure that the American workforce has all the tools and information needed in these very trying times."

Congress passed the FFCRA as part of its broader effort to help millions of Americans cope with the economic storm wrought by the virus, requiring businesses with fewer than 500 workers to provide emergency short- and long-term paid leave.

The law provides workers with two weeks of time off at full pay if they can't work for various reasons tied to COVID-19, including if they've been quarantined or have COVID-19 symptoms and are seeking a diagnosis. The law applies to part- and full-time workers, providing them as many hours off as they generally work in two weeks, up to 80 hours.

Employers must pay employees at their full wage if they are taking time off for themselves or two-thirds of their regular pay if they have to care for a family member, up to certain caps. The bill also amends the Family and Medical Leave Act to give workers long-term paid time off at partial pay if they can't work because their child's school has closed. Employers covered by the law can seek reimbursement of any qualifying wages they pay under the FFCRA through tax credits.

The DOL has already gone through several rounds of guidance since the FFCRA was signed into law. In its initial batch of guidance issued March 24, the DOL touched on issues like which categories of workers could be counted toward the 500-worker threshold.

That was followed days later by another FFCRA-related guidance that included notices that employers must post laying out the triggers for paid sick and leave time, the amount of time workers can take off, and the amount they'll be paid while off work. The agency also sent a memo to field staff that laid out a nonenforcement policy for employers that unwittingly break the law that will remain in place until April 17.

And on Friday, the DOL updated its Q&A document to address issues such as the applicability to the FFCRA of so-called intermittent leave, which is when workers take leave for short periods of time, as well as the law's application to businesses that are forced to shutter amid the COVID-19 pandemic.

In its latest update on Saturday, the DOL again expanded its Q&A guidance from about three dozen entries to nearly 60, including a section that fleshes out the details of a carve-out in the law for certain employers with less than 50 workers.

While the law does not exclude those smaller employers outright, it directed the DOL to issue regulations exempting businesses that fall below the 50-employee threshold if making them pay leave would jeopardize their business.

In Saturday's guidance, the Labor Department laid out the parameters for businesses to claim that exemption so as to not provide sick leave or expanded medical leave to workers whose kids' schools or childcare providers are closed because of COVID-19.

To do so, the DOL said that an "authorized officer of the business" must determine that the leave request falls into any one of three buckets: that the paid leave provision would cause the business' expenses and financial obligations to exceed its revenue and cause it to "cease operating at a minimal capacity"; that the absence of any workers who request FFCRA leave will "entail a substantial risk" to the company's financial well-being or its ability to operate because they possess "specialized skills, knowledge of the business, or responsibilities"; or that there aren't enough qualified workers available to do the work the employees requesting FFCRA leave perform if that work is necessary for the business to run at "minimal capacity."

Elsewhere in the DOL's newly updated guidance, it clarified that paid sick leave under the FFCRA doesn't affect an employee's ability to take any other forms of paid leave they have accrued, such as time mandated by city or state laws or time offered as part of a company policy.

The Labor Department also said that public sector workers are generally allowed to take paid sick leave with some exceptions, such as federal employees who are excluded from taking such leave by the Office of Management and Budget. However, the DOL noted that the "vast majority" of federal workers aren't covered by the FFCRA and likely aren't entitled to expanded family and medical leave under the law.

The DOL in its Q&A also provided contact information for agency offices that workers can contact if they believe their employer is covered by the FFCRA but refuses to provide leave as it requires, and made clear that businesses with a few limited exceptions must give workers who return from FFCRA leave their job back or a give them a "nearly equivalent" position.

Clarification: This article was updated to better describe the reasons by which a worker can receive emergency sick leave at full pay.