By Dani Kass · Listen to article

Law360 (March 16, 2022, 4:51 PM EDT) -- Within weeks of Russia announcing that it won't enforce intellectual property from "unfriendly countries" — mainly, those that have sanctioned it for invading Ukraine — trademark applications blatantly copying McDonald's and Starbucks have been filed. 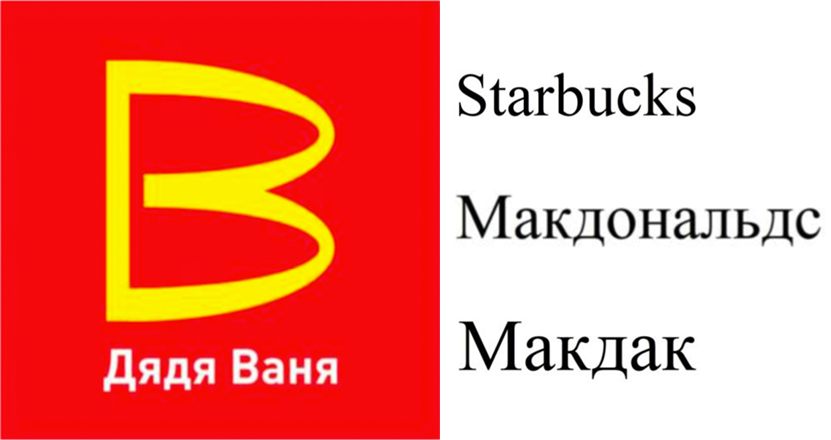 Trademark applications filed in Russia over the last week, after the country loosened its IP enforcement for "unfriendly countries."

On Monday, an applicant named Ekaterina Yurievna Petrunina filed for ownership of the Cyrillic versions of "McDuck" — as McDonald's is often referred to in Russia — and "McDonalds," along with the Latin alphabet version of "Starbucks." Two days before, Russian Field-Logistic LLC filed a trademark application for the McDonald's logo turned sideways, with "Uncle Vanya" spelled out in Cyrillic.

While putting the name of Anton Chekhov's biggest play on a red-and-yellow McDonald's logo may seem unexpected, it was inspired by a Russian politician, according to news reports. Vyacheslav Volodin, the chair of the State Duma, reportedly said all McDonald's should be replaced by a domestic network called "at Uncle Vanya."

McDonald's opened in Moscow in 1990 to great fanfare, with hundreds of people lining up to try fast food from the U.S. for the first time. The company has now temporarily closed 850 stores in the country.

Starbucks' former CEO recently said it has 130 stores in Russia, but the coffee giant has also announced that it will withdraw from the country.

The trademark applications were posted online Wednesday by trademark attorney Josh Gerben of the Gerben Law Firm, who unearthed them with help from Ukrainian attorney Maksym Popov of Mentors Law Firm.

The applications come after a Russian court in Kirov cleared a citizen to use the "Peppa Pig" and "Daddy Pig" trademarks owned by Hasbro Inc.'s Entertainment One UK Ltd. for free, explicitly as retaliation for the U.K. issuing sanctions against Russia.

The filings are "absolutely" a reaction to the government's recent stances on IP, Gerben told Law360 on Wednesday. However, he said it's likely that individual Russians are being opportunistic, the way people in the U.S. can be.

"It's hard to verify who the people are who are filing applications," he said. "It could just be Bob from Moscow, sitting in his apartment, figuring out he can file this and own Starbucks now. Or, you don't know if they're being asked by the government to make these. There's always that possibility."

Whether the applications will be granted is still up in the air, with Gerben saying Russia, like most countries, takes months to review applications.

"The interesting thing will be whether someone tries to fast-track these to send a message," he added.

Anti-war Russian intellectual property attorneys that Gerben has talked to were surprised at how IP is being dismantled in their country, he said, noting that it could have an impact for years to come. Attorneys in the U.S. are also questioning whether it makes sense to file for protection, Gerben said, adding that unless there's a regime change, "you're never going to be able to protect your IP in Russia."

Representatives for the Russian government, McDonald's and Starbucks didn't immediately respond to requests for comment Wednesday.