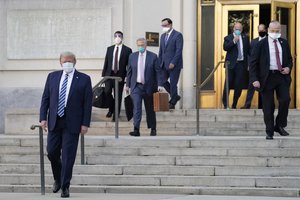 In a series of tweets, the president said he told administration officials to halt negotiations with House Speaker Nancy Pelosi, D-Calif., until after the November elections, blaming Democrats for their insistence on more funding for state and local governments. Treasury Secretary Steven Mnuchin and White House Chief of Staff Mark Meadows had been negotiating with Pelosi and Senate Minority Leader Chuck Schumer, D-N.Y., for weeks on the elusive deal, but the two sides were unable to settle on the size of the relief package.

"I have instructed my representatives to stop negotiating until after the election when, immediately after I win, we will pass a major Stimulus Bill that focuses on hardworking Americans and Small Business," Trump said on Twitter. "I have asked Senate Majority Leader Mitch McConnell not to delay, but to instead focus full-time on approving my outstanding nominee to the United States Supreme Court, Amy Coney Barrett."

McConnell, R-Ky., said he agreed with Trump's decision to pull out of the talks with Democrats.

"Well, I think his view was that they were not going to produce a result, and we need to concentrate on what's achievable," he told reporters.

, even as millions of American families suffer during the novel coronavirus pandemic. In a Dear Colleague letter to House Democrats, Pelosi said Trump wants to allow tax cuts for wealthy Americans while rejecting an expansion of the earned income tax credit and the child tax credit for poor children.

"Instead, Trump is wedded to his $150 billion tax cut for the wealthiest people in America from the CARES Act, while he refuses to give real help to poor children, the unemployed and America's hard-working families," Pelosi said in a statement.

"Clearly, the White House is in complete disarray" and rejecting Federal Reserve Chairman Jerome Powell's warning that "too little support would lead to a weak recovery, creating unnecessary hardship for households and businesses," Pelosi said.

House Democrats passed an updated version of the Heroes Act on Thursday, a $2.2 trillion bill to provide individual and business tax breaks, state and local government funding and protections for health care workers. The legislation would end a provision allowing the use of net operating losses to wipe out tax liability, undoing a change from the Coronavirus Aid, Relief and Economic Security Act

that was designed to provide businesses with more operating revenues during the pandemic.

House Ways and Means Committee Chair Richard Neal, D-Mass., reacted harshly to Trump's decision, calling it a dangerous abandonment of families who are going hungry and losing their homes during the recession caused by COVID-19, the respiratory illness that has claimed more than 210,000 American lives.

"This decision is a dangerous one, and I sincerely hope he will return to the table for the good of our nation," Neal said in a statement.

Some groups expressed disappointment in the pause in negotiations.

Tim Delaney, president and CEO of the National Council of Nonprofits, criticized the president and congressional lawmakers for giving up on a pandemic relief package so they could campaign. Nonprofit organizations, operating with shrinking resources and smaller staffs, won't be able to provide relief to struggling Americans without an extension of the CARES Act, he said.

"Without a deal, thousands of nonprofit employees will go from helping others to needing help themselves," Delaney said. "Nonprofits that people rely on will have to shutter, just as the need for their services peaks."

He called Trump's protection of the tax break a "punch in the gut to all working Americans."