Law360 (August 12, 2020, 8:11 PM EDT) -- Attorneys who won a $506 million jury verdict against Apple this week over 4G LTE patents said Wednesday that experiencing an in-person trial during a global pandemic was surprisingly normal, so long as you overlook the face shields, plexiglass and temperature checks outside the Eastern District of Texas courthouse. 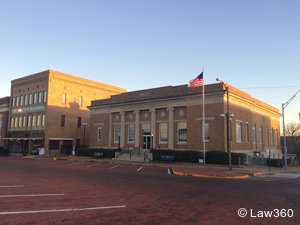 The Sam B. Hall federal courthouse in Marshall, Texas, where a jury trial against Apple wrapped up smoothly this week despite the coronavirus pandemic. (Jess Krochtengel | Law360)

McKool Smith PC- and Irell & Manella LLP-backed PanOptis persuaded an eight-person jury that WilmerHale-backed Apple willfully infringed five patents, to the tune of $506.2 million in royalties for past sales. As the jury wrapped up, the parties headed into a bench trial Tuesday before U.S. District Judge Rodney Gilstrap over whether PanOptis offered Apple a sufficient license on the standard-essential patents.

PanOptis' attorneys said Wednesday that the risk of going to trial during a public health crisis was worth it, and that the court's precautions made them feel perfectly safe.

"This verdict is wonderful, but if we would have lost or gotten $50, I still think it would have been a wonderful thing," Irell partner Jason Sheasby said. "It shows there's something else, that we can keep going. I think that's super important: There's a path forward in our lives, it's not just this virus every single day."

According to the Texas Department of State Health Services, each day this month there have been up to 22 new confirmed cases of the novel coronavirus in Harrison County, where the seven-day trial took place. The county's worst day for confirmed cases throughout the pandemic was when 29 cases were recorded on July 16. There have been 23 fatalities overall, according to the DSHS.

The state also tracks confirmed cases per 1,000 people, a number that has been rising steadily in the 66,500-person county since April.

Counsel for Apple didn't respond to interview requests, but a company spokesperson said Tuesday that "we thank the jury for their time but are disappointed with the verdict."

When clearing the case to go forward in July, Judge Gilstrap said he was confident that the trial wouldn't endanger all involved, as Apple had cautioned. While it's unclear if the tech giant would agree, counsel for the company suing it said they felt entirely safe.

McKool Smith principal Steven Pollinger said the jurors all wore face shields provided by the court. Counsel tables were limited to three people and were spaced from others in the courtroom. Witnesses didn't wear masks while testifying, but there was a barrier separating them from the judge and court staff, and the masks or face shields went back on when they left the witness stand, he said.

"It was certainly different, but everyone was cooperative," Pollinger said. "While extra steps were involved, at the end of the day, the trial came off like a normal trial. I don't think the presentation of evidence was hampered in any way."

Irell's Sheasby said potential jurors received a letter from Judge Gilstrap along with their summons, which allowed them to raise health concerns before coming to court. None of the 44 potential jurors who showed up used the virus to try to get out of serving, he said.

Another McKool Smith principal, Samuel Baxter, said all potential jurors' temperatures were checked, and they had to fill out a questionnaire about possible exposure to the virus. During voir dire, attorneys stayed at the podium and masked potential jurors used microphones, which were wiped down between speakers.

"I thought there might be a stampede of people saying, 'I don't want to serve,' but there was not that at all," Baxter said.

During the trial, members of the jury stayed socially distanced, with seats between them left open, Pollinger said.

Members of the public were able to watch the proceedings via a live video feed from another courtroom, Baxter said. The only issue was when an Apple witness testifying by video from Brussels had sound problems, but it was quickly fixed, he added.

"I was afraid it was going to not look like a real trial and be sort of stilted, and it turns out that wasn't true at all," Baxter said. "The jury paid super close attention to the evidence; almost all of them took notes. These were hard patents, but they really got into it and seemed to really appreciate everybody trying to explain the patents and what our points were and what Apple's points were. It turned out to be a normal trial."

The jury then awarded PanOptis and its co-plaintiffs the full amount requested, which their damages expert had calculated based on factors including the patents' technical benefits and a consumer survey, and then verified as reasonable by analyzing a comparable license. It's one of the biggest patent verdicts of the last 10 years.

A PanOptis spokesperson said Wednesday that "we are very pleased with the jury's decision. We hope this result helps bring an end to our global dispute with Apple."

Apple said Tuesday that it intends to appeal, and that "lawsuits like this by companies who accumulate patents simply to harass the industry only serve to stifle innovation and harm consumers."

While the jury was deliberating, Judge Gilstrap held a one-day bench trial on PanOptis' request for declaratory judgement that a license it had offered Apple was fair, reasonable and nondiscriminatory, as is required for standard-essential patents. The attorneys said Judge Gilstrap didn't provide a timeline for when he expects to issue a decision on the bench trial.