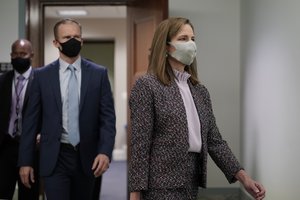 Tillis told Judge Barrett that in his view, "We've seen a lot of Supreme Court cases that have waded into patent eligibility and produced a series of opinions that have really muddled the waters." He asked for her views on those rulings and whether she thinks "the court should go back and clarify at least the method they use to reach their opinion."

"I have to be completely honest and confess to you I can't think of what particular cases you might be thinking of on patent eligibility," Judge Barrett responded. However, she said that "I would say that clarity in decision-making is always something that courts should strive for."

"I know on the Seventh Circuit we try — and I try — to be attuned to in writing opinions, whether it gives good guidance to lower courts and then also to those who are trying to order their conduct in compliance with the law," she said. "So I think clarity is certainly a virtue in this context."

Since patent cases do not go to the Seventh Circuit, and Judge Barrett has a small record on IP matters, it is perhaps not unexpected that she is apparently unfamiliar with Supreme Court rulings like the 2014 holding in Alice v. CLS Bank

. Critics like Tillis have said that case, which held that abstract ideas implemented using a computer cannot be patented, and others have made it unclear what is eligible for a patent.

Tillis' committee held a series of hearings last year on the high court's eligibility decisions, and he told Judge Barrett Wednesday that members are still discussing "specific cases we can potentially abrogate if we can get bipartisan support."

The intellectual property subcommittee has also held hearings about potential changes to copyright law to take into account changes in technology, and he asked Judge Barrett how she viewed the role of the courts in that process.

The current legal framework is a set of "Myspace laws in a TikTok world," Tillis said, and the committee feels that "there is a need for us to move forward with some clarity and some protections."

He noted that over the past century, the Supreme Court has answered questions about whether copyright law covers new technologies like cameras and movies, and asked Judge Barrett, "Do you think that the Supreme Court is the best institution to answer these questions, or is that a role that Congress should play?"

"Most of the things you are identifying sound to me like matters of policy," she said. "So those seem like matters that are best addressed by the legislature; the democratically elected body, not policy made by courts."

Tillis said earlier this year that current copyright law has overprotected tech companies at the expense of copyright owners, and that "we may be at a point where we need to design an entirely new system to combat online piracy."