Do Atty Hopefuls With Criminal Records Get A Fair Shake?

Attorney hopefuls must undergo a "moral character" screening that is supposed to protect the public from unscrupulous lawyers, but a new report from Stanford has found that the way bar examiners evaluate criminal records often has little to do with that purpose.

Additionally, the report found, those screenings don't square with what research indicates makes a person more likely to reoffend or commit misconduct.

Every year, over 600,000 people leave prison in the United States, and for many of them, their experiences with the criminal justice system spark an interest in law and the legal system. If they want to pursue a legal career and become lawyers, however, the road can be rocky.

The research released Wednesday from Stanford Law School's Criminal Justice Center and Center on the Legal Profession has found that California's "moral character" requirements can block people with criminal records from being granted a license to practice law, and can deter many applicants from even applying to law school.

"It is unquestionably legitimate and important to protect the public from the risk of lawyers who, even if intellectually qualified, may disserve their clients and the legal system through fraudulent or deceptive conduct," the report said.

"In its efforts to protect the public, however, the legal profession should ensure that the screening criteria and processes it uses are tailored to this goal and that it does not erect barriers that are arbitrary, discriminatory, or empirically ill-grounded," the report added.

The impacts of the bar's approach could also have major implications. The report found that even though the rate at which the state bar denies applicants is low, simply having the moral character requirements not only deterred potential applicants, but also made law schools wary of admitting students with criminal records.

Law schools are required by the American Bar Association, which accredits law schools, not to admit students who do not appear capable of being admitted to the bar.

Reforms could help shift those dynamics, according to the report. That could include more outreach to those with criminal records by law schools, helping applicants with criminal records find pro bono attorneys to help them navigate the bar admission process, and requiring at least some bar examiners to have expertise in psychology, mental health, substance abuse, or similar subjects.

While the report focused mainly on California, moral character requirements for attorney hopefuls are found in all 50 states, though how those standards are applied varies widely. Some states also impose specific restrictions on people with criminal records, such as Texas, which says applicants must wait five years after completing their sentence before being eligible for admission to the bar.

Others are even more strict, such as Mississippi, where a felony conviction — with few exceptions — automatically and permanently prevents someone from being allowed to practice law in the state.

According to the Stanford report, these types of moral character requirements originated in the 19th and early 20th centuries and, rather than being driven by consumer protection concerns, were designed to be discriminatory.

"[The] intensification of the moral character review process was motivated in part by nativist, ethnic, and anti-Semitic biases, as well as by the profession's desire to limit competition from newcomers more generally," the report said.

Throughout the 20th century, the character standards were wielded against people who participated in civil right movements, conscientious objectors, student activists and those suspected of communist affiliations, according to the report.

As late as the mid-1980s, one study found that 80% of state bars said they would or might investigate an applicant who had a misdemeanor conviction as a result of participating in a sit-in, a common type of action during the civil rights movement, the report said.

Looking at California, the researchers noted that it is more and more common in the state for people in prison or who have been released from prison to have access to a college education thanks to state programs and policies, and thus to be eligible for law school. But the moral character requirements can block otherwise qualified potential attorneys..

California lays out a number of factors for examiners to consider when evaluating a past conviction, but it doesn't provide any training to examiners that is directly relevant to the issue, the report said.

Examiners therefore might not know key facts, such as that after 10 years, even people with serious past convictions are generally no more likely to commit crimes than the general population, according to the report. For less serious crimes, the time frame is typically even shorter, the report said. 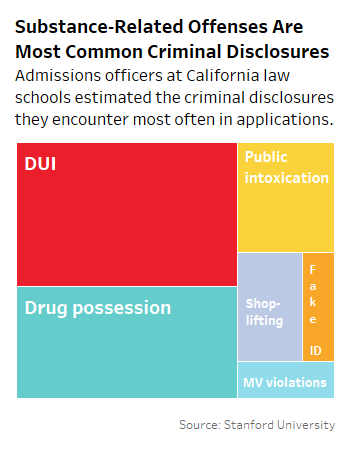 The report also said that little research had been done on attorneys specifically, but that in one Connecticut study, a criminal record did not appear to make attorneys more likely to face discipline.

Having significant student loan debt, on the other hand, did appear to make disciplinary proceedings more likely, according to the report.

Professor Debbie Mukamal, one of the report's lead authors, told Law360 that she hopes the report will be a resource for both prospective lawyers with criminal records and decisionmakers evaluating their potential.

"I want formerly incarcerated people to understand what the actual barriers are and what are ways to overcome them," she said.

"[I also want] state bar officials and committee members to realize that there's a range of relevant research that can affect the kinds of decisions that they're making — and that when they over-rely on criminal records that they could be compromising diversity goals that the law schools and the bar have," she added.

The state bar is reviewing its moral character review process, and Mukamal has been appointed to the working group that is undertaking the evaluation.

"Its recommendations provide a thoughtful road map for us in ensuring that the admissions process is both inclusive and fair," Wilson said.